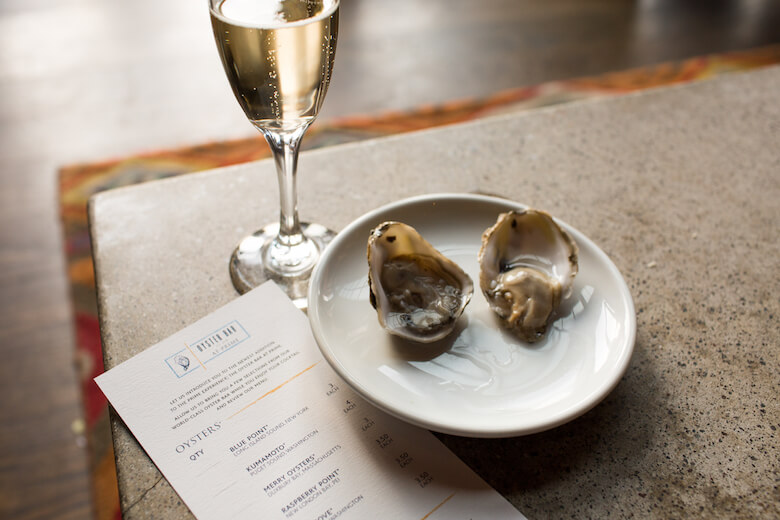 “We are always trying to push the envelope and offer our guests everything we can,” says Michael Bohlsen. • Photo by Lindsay Morris

Oyster lovers, rejoice: Huntington’s beloved Prime: An American Kitchen & Bar has just unveiled a gorgeous new oyster bar. Situated directly across from the restaurant’s indoor bar, adjacent to its bustling kitchen, the oyster bar is a stunning centerpiece that modernizes Prime’s approach to seafood, and invites guests to enjoy an interactive experience, as well.

“We are always trying to push the envelope and offer our guests everything we can,” says Michael Bohlsen, co-founder of Bohlsen Restaurant Group. “That’s why we just underwent such extensive renovations. We want to keep things current and we want to keep people happy.”

Launched in early May, Prime’s oyster bar is already a runaway success. • Photo by Jim Lennon

Prime has a long history of keeping things current and keeping people happy, offering its guests a feast for all of their senses ever since its opening. Now, however, after undergoing a multimillion dollar renovation, that feast is larger and more satisfying than ever. Conceptualized by Jim Wood, the renovated space still carries the same “boathouse vibe” that Prime patrons know and love, but with bronzed, elegant touches that boast of superior American craftsmanship.

The oyster bar, however, is indisputably the star of the show.

Launched in early May, the oyster bar has its own unique, ever-evolving menu focused on oysters and clams, with some cold and chilled items offered as well. The menu is available to guests of both the restaurant’s bar and dining room, and its most recent offerings included Blue Point, Kumamoto, Big Cove, Fanny Bay, Raspberry Point and Merry oysters; clams; tuna tartare; lobster, shrimp and crab cocktail; littleneck clams; and more.

Don’t know the difference between a Blue Point and a Kumamoto? Don’t be afraid to ask. Ahead of the oyster bar’s launch, Bohlsen Restaurant Group invited Master Shucker and author Patrick McMurray to train the restaurant’s staff.

Edible was lucky enough to sit in on one of McMurray’s training sessions back in May, where we learned—alongside Prime’s staff—that, when it comes to putting sauce on oysters, “like lingerie, less is more.” We also learned how to shuck “Instagram-ready” oysters, as well as the differentiating characteristics between East Coast, West Coast and European oysters.

Our greatest takeaway, however, was McMurray’s tips for how to taste oysters. First: Don’t use any sauce or lemon. Second: Employ a two-bite chew. Third: Aerate, breathing in through the mouth while chewing. Fourth: Swallow, while continuing to think of the flavors as they develop. (This summer at Prime, we plan on putting all these tips to good use.)

“I met Michael [Bohlsen] at the Seafood Festival Show in Boston,” says McMurray. “We started talking and he invited me to speak with, and help train, the team at Prime. I’m a champion shucker by trade, but a busboy at heart, so it’s really an honor to be here. The bar looks great—and the team looks ready.”