Chelsea Kravitz’s new restaurant is a gift to guests and the restaurant workers who serve them. 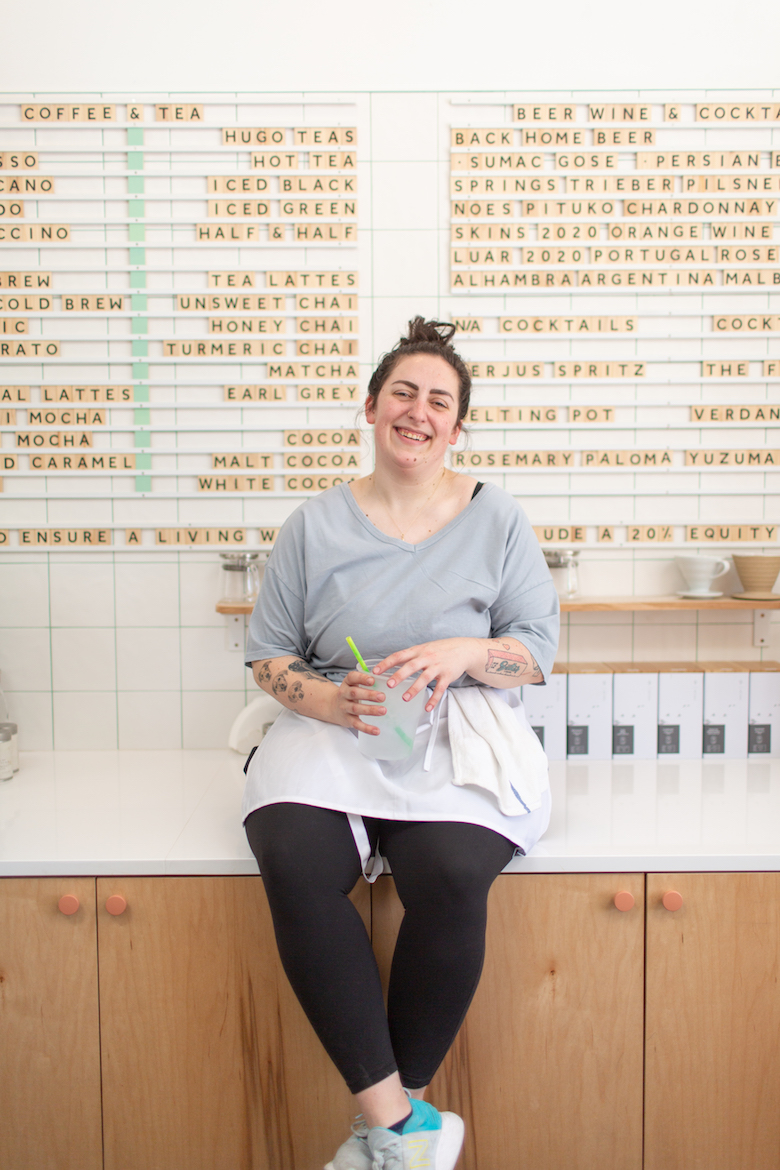 Chelsea Kravitz opened Flourish Bakeshop and All Day Café in Glen Head this May.

Before Chelsea Kravitz was her own boss, she was at the mercy of the whims of others. Over almost 20 years in the the restaurant business, she had encountered her share of lousy bosses who saw her as no more than a cog in the wheel of their own ambitions, as no more than someone who couldn’t find any other job, as no more than a worker drone without ambitions of her own.

But Kravitz had also had good experiences, transformative experiences, the kind of experiences that lifted her up out of being a wayward kid who was in rehab by age 19, to become an accomplished self-taught cook, baker and business woman ready to captain her own ship.

So when Chelsea Kravitz finally achieved her dream of opening her own place—Flourish Bakeshop and All Day Café, in Glen Head this May—she knew she wasn’t going to be that lousy boss. Hospitality, for Kravitz, is not just about making paying customers feel welcome and valued. It’s about making the staff—from cook to server to cleaner and everything in between—feel welcome and valued too. 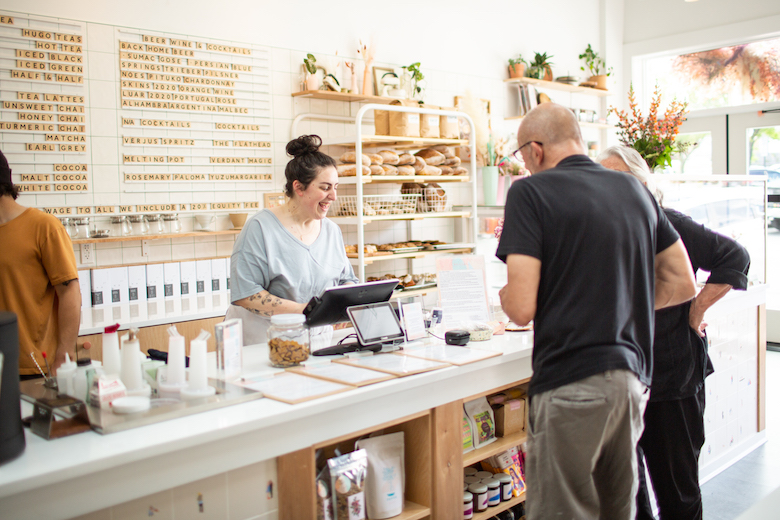 You can feel the love even before you see it. Flourish smells delicious—of good coffee, of sweet things, of fresh-baked bread. The moment you approach the big, wide and very open front of the house at 6 Railroad Avenue in Glen Head, you get a modern-beach-cottage-meets-French-patisserie feel, drenched with natural light. There is a long white quartz table and high stools for sitting next to whomever turns up, or low two-tops and four-tops with light maple benches for more private visits. Behind the glass are cookies and muffins, and behind that, stacked loaves of rustic breads in tempting shapes and sizes.

Then, the thoughtful details start to emerge. Every stool space has a hook for purses and bags; every table has sockets for charging phones or kids’ iPads. There are different teas and coffees for every mood, including a hyper-local Roslyn roast, and the teas are loose, served in little glass pots for you to pour as needed. Ask for black tea, and you will have a choice of three, each with distinct flavor profiles. On the wall menu, spelled out in oversized tiles that look like Scrabble, there are carefully curated cocktails, wines and craft beers, but also mocktails for those who want the fun beverage without the booze. There are ceiling fans and light boxes draped in greenery and sweet framed items hanging all around the dining area and—if you are not a kid you might miss them—unique ceramic tiles lining the counter by your knees, painted and glazed by a friend: each figure represents a friend of Chelsea Kravitz, taken from photographs. They are well-worth squatting down to see.

The menu is similarly thoughtful—small, tight and changing with the seasons, and with enough variety of flavors and dishes to keep any group happy. There is breakfast all day with a yogurt bowl dressed with homemade seasonal jam, pancakes, a variety of burritos with vegetarian options, and what would a Long Island breakfast joint be without a colossal egg sandwich? There are sandwiches loaded with greens, meats, cheeses, and homemade pickled veggies and spiked with spices or chilis on in-house sourdough. 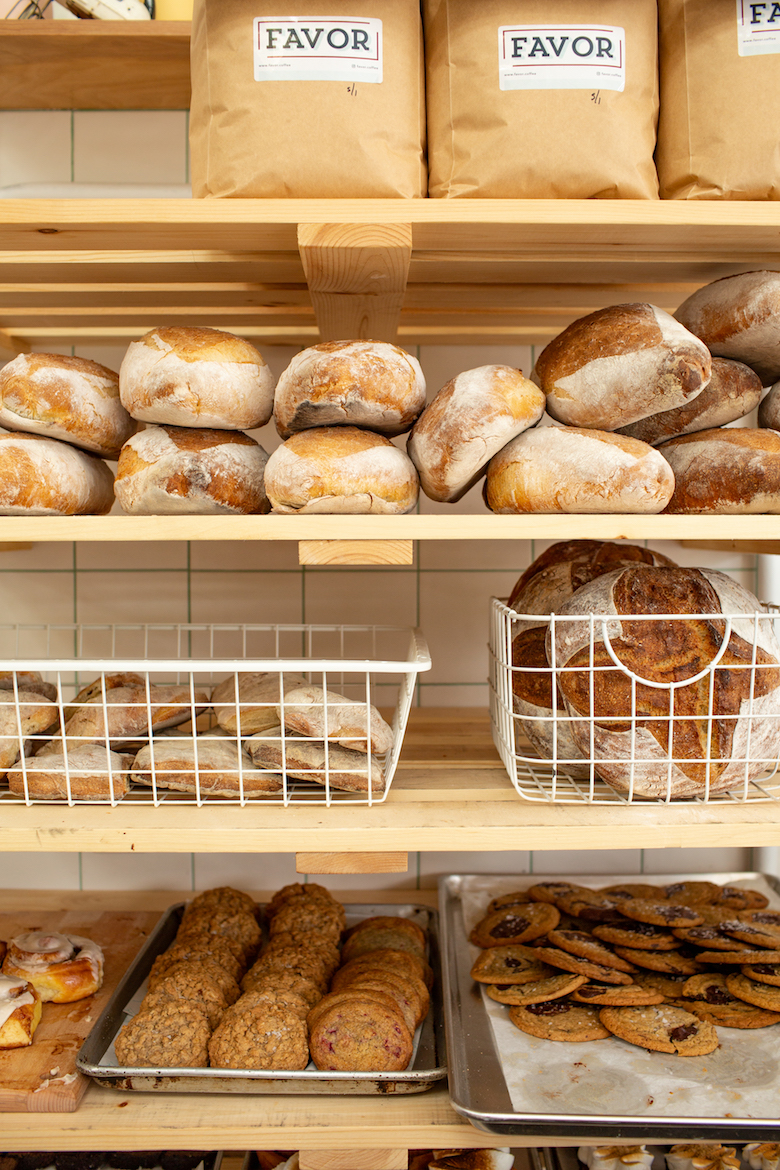 Kravitz approaches the offerings at Flourish with tremendous thought and intention—and it shows.

“Our sourdough is really developed; it is cold fermented for 24-48 hours in order to develop the proteins and make it really digestible,” Kravitz says.

And then there are the salads, which Kravitz sees as foundational to the menu.

“Salads in general set us apart,” she says. “So much of the time I just want a really great salad, but not the same as what you get on every menu.” So the salads might be a roasted cauliflower piccata with chickpeas, raisins, feta and lemon chili, or her personal favorite, inspired by restaurant friends in New Orleans: a crispy rice salad seasoned with curry and ginger and packing a lot of heat.

What you may not see as a customer is how the back of the house is just as lovely and light as the building’s public-facing front. As airy and spacious as the bakeshop and seating area are, much of the 3,600 square feet of the former Iron Horse is not in public view. And yet the back kitchen has gorgeous windows, the stairs down to the basement workroom are lined with framed art (much of it by Kravitz herself); the spaces are clean and bright and organized with bright color coordination.

All of this invitingness is the culmination of an arduous journey. 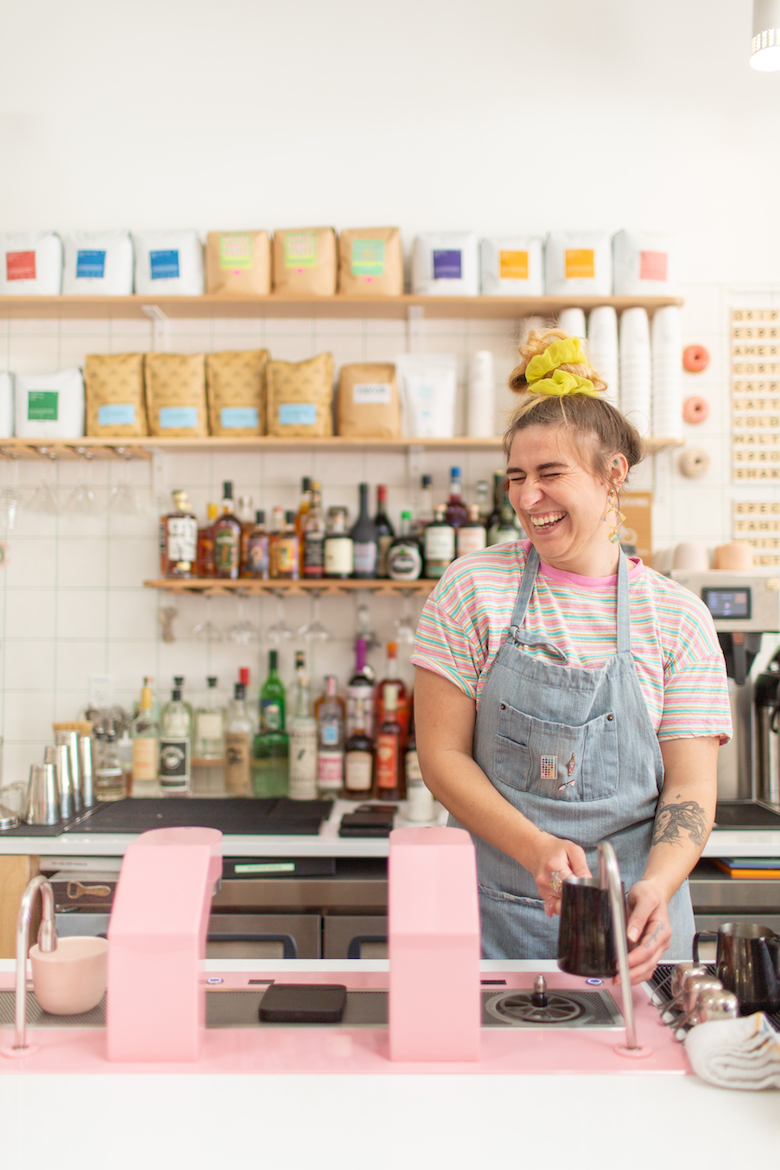 Flourish Bakeshop is an Instagram-ready dream—with, if you can believe it, even more substance than style.

Chelsea Kravitz, now 32, was a self-described “lost kid” at 14 when she first lied about her age to get a job at a bagel shop in Dix Hills, then jumped over to an Italian restaurant where she lied about her experience to get a server job—a falsehood that was quickly uncovered when her first act was to drop a whole tray of red wine on the white jumpsuit of a guest, who just so happened to be the owner’s wife’s best friend. But she stuck to it and soon she was a veteran 17-year-old hanging out with her much older colleagues at bars and getting sucked into the underbelly of the restaurant worker lifestyle.

“I drank a lot and did a lot of drugs and totally crashed my life,”  she says. “Then I went to rehab upstate—and not the cushy type you see on TV, which I am now grateful for. Afterwards, I needed a place to go. My boyfriend at the time was going to Bard College [in the Hudson Valley] and I kind of moved in with him and I loved it.

“I had upset everyone; I was a terror. It was time to get it together and show everyone that I meant it. It is also why I needed to get away, because it was too much to be constantly reminded of my mistakes.” 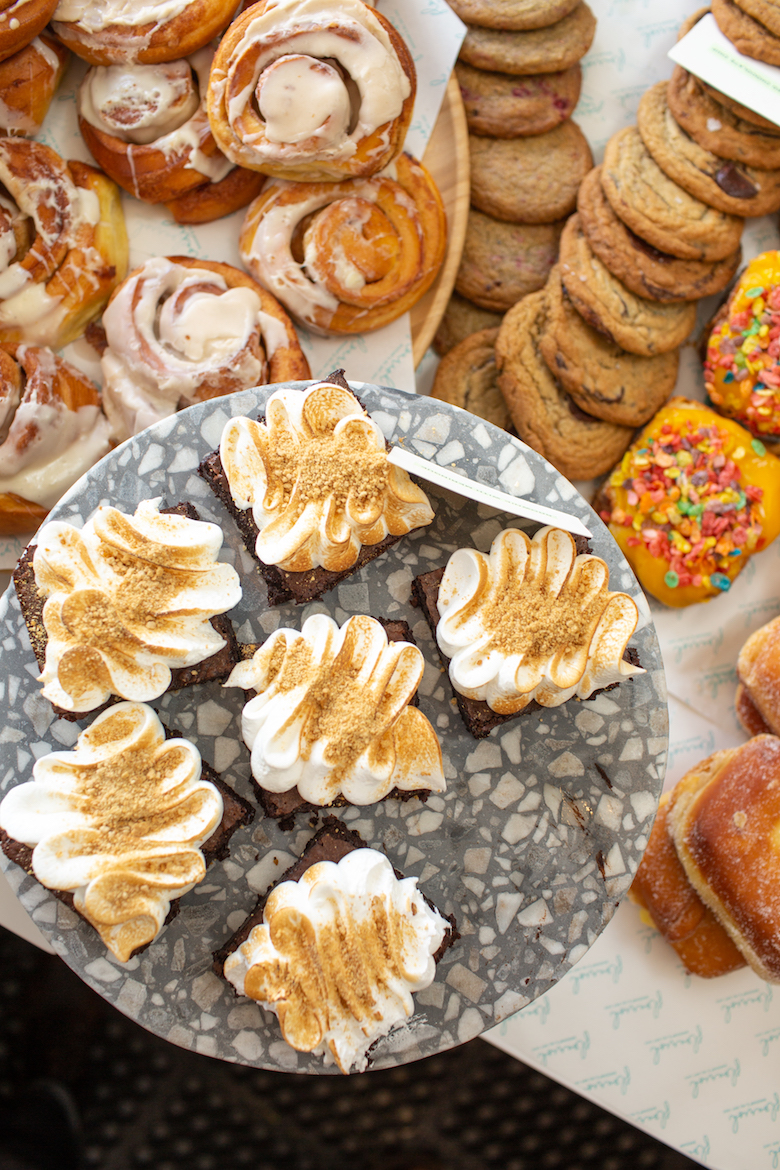 So she got an apartment and another restaurant job and began reconstructing herself in this small town called Millerton where there happened to be a lot of other people living in sobriety. A chance meeting with restaurant manager Clare Caramonica at the Oakhurst Diner—established in 2010 by Paul Harney of Harney & Sons tea company—resulted in a better job for Kravitz at the diner.

“That experience had the biggest impact as far as my career,” Kravitz says. “It’s the only place I worked that I was treated as a person. The fact that they had staff yoga, back in 2010—it may seem like a silly thing, but [Harney] did it because he cared. He offered holiday hours at the tea company paying really well so we could make some money for the holidays. He was a good guy.”

Kravitz had already been working in the food industry for years, but—inspired by the atmosphere of the diner and of the proximity to eight farms offering fresh produce and dairy—she started teaching herself to cook. Really cook.

“I was in my tiny apartment kitchen in my tiny part of someone else’s house and I started cooking for myself, making tons of mistakes, asking the guys at work to teach me and watching, helping with prep, trading my desserts for them to teach me how to make authentic Mexican lunch. Most of the guys were Mexican, so I really learned that and you’ll see it on my menu. Most other ‘chefs’ don’t want to teach you because they think you’ll steal their recipes, but these guys didn’t mind.” 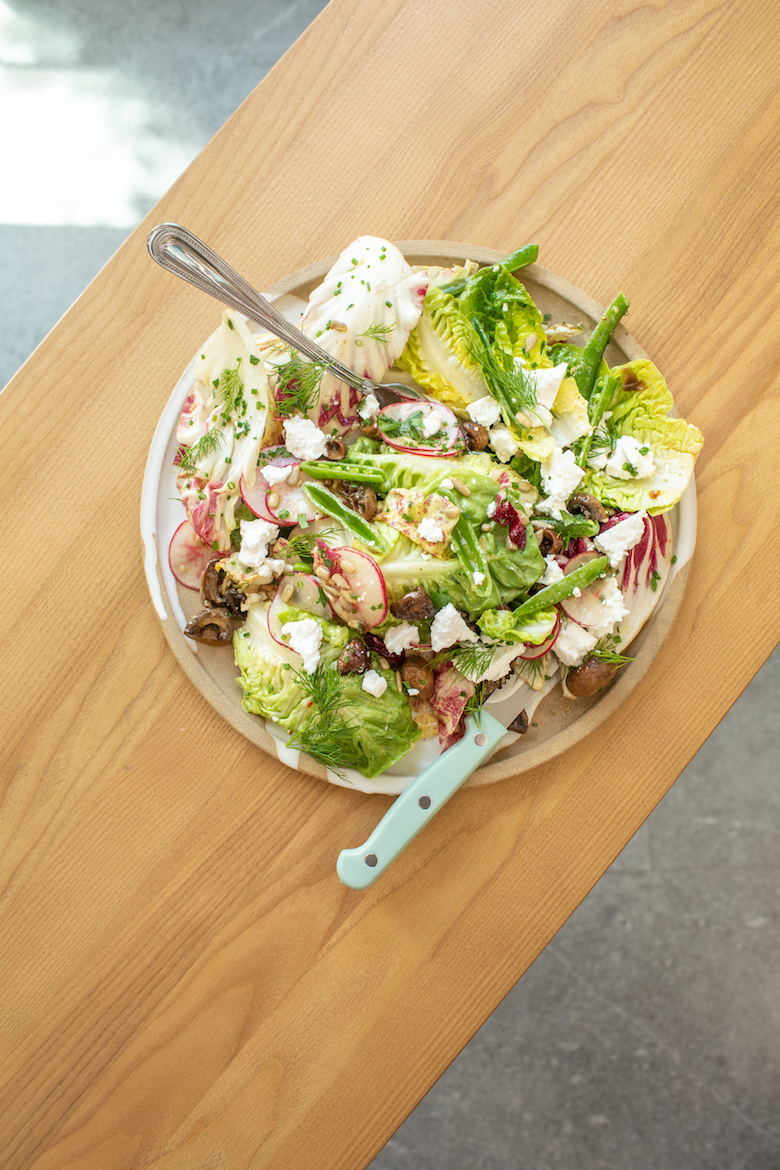 Not your mama’s salads. The salads at Flourish are among the brightest stars of the show.

Desserts were really the thing she loved—and still loves— most. As she grew in confidence, she started selling desserts. By the time she returned to Long Island in 2012, she was doubling as pastry chef at her server jobs. She did a stint as a personal chef/nanny and then returned to the restaurant world to find that she burned to have her own place and that the time was coming. She got a knife and whisk tattoo behind her left ear as a symbol of her drive and commitment. Now that she could handle the food part, she started asking about the business end, but wasn’t getting answers. So again, she started teaching herself—Health Department rules, spreadsheets, food costs, everything. She moved to Glen Head and began looking for the right space. The Iron Horse had closed and when she saw it she knew.

The place needed tons and tons of work, but she’d been planning a long time, had investors and had a vision. So in early 2020 she bought the building. 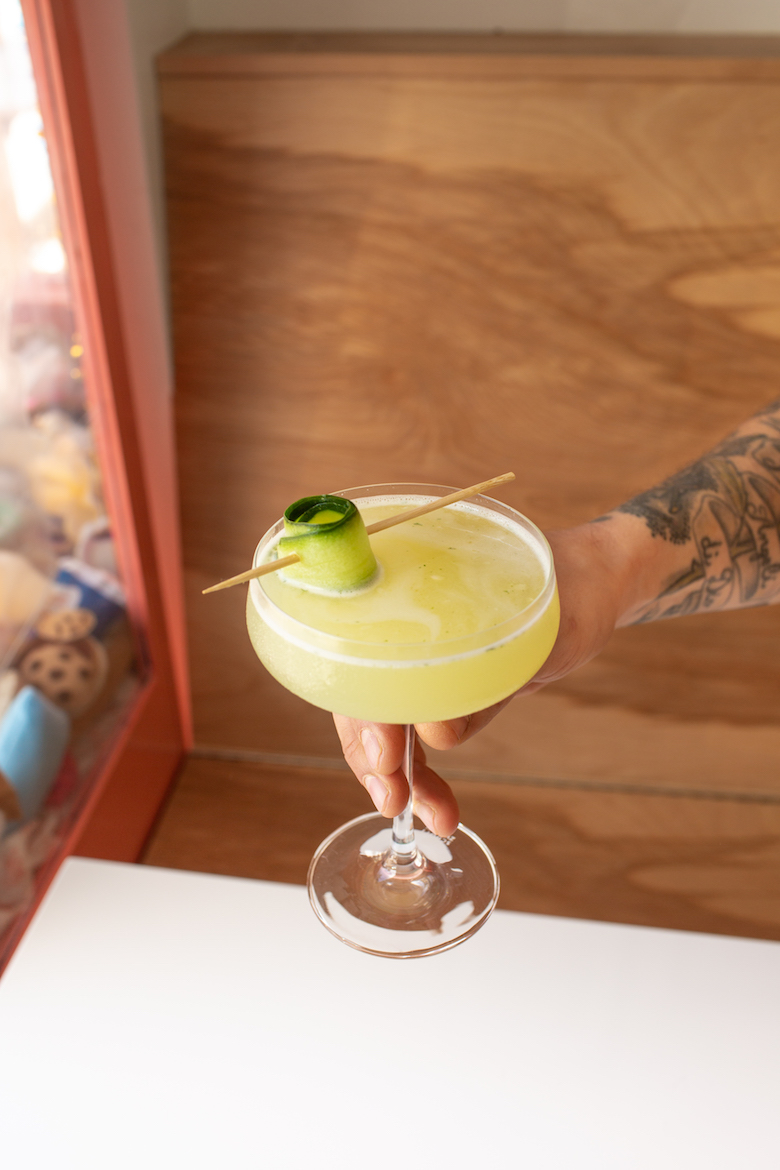 The next two years were dedicated not only to making sure the building would fulfill her vision, but that the building would be brought up to code. The roof was leaking in multiple places, the interior had to be gutted and rebuilt from the basement up. She obsessed over every detail, ordering six different dining chairs so she could sit in each, making sure larger guests would be comfortable. Her espresso machine is as prized as an Emmy Award. Each element had to be just right.

And now, shortly after opening, she is literally in her happy place. She has a beautiful space, a menu she is proud of, the opportunity to play with the baking and put together fun flavors—think Fruity Pebbles and chocolate chip cookies whose chips are actually more like slabs of chocolate, thumbprint cookies with mango-passionfruit jam.

She has a collaborative approach to her staff. “We don’t have a hierarchy,” she says. “I am still the boss; I make the menus and the recipes, but anyone can correct me and contribute.”

Full time employees at Flourish earn $21 an hour and receive full benefits. Kravitz has taken the step of putting a 20-percent ‘equity fee’ on each guest’s check to cover that. 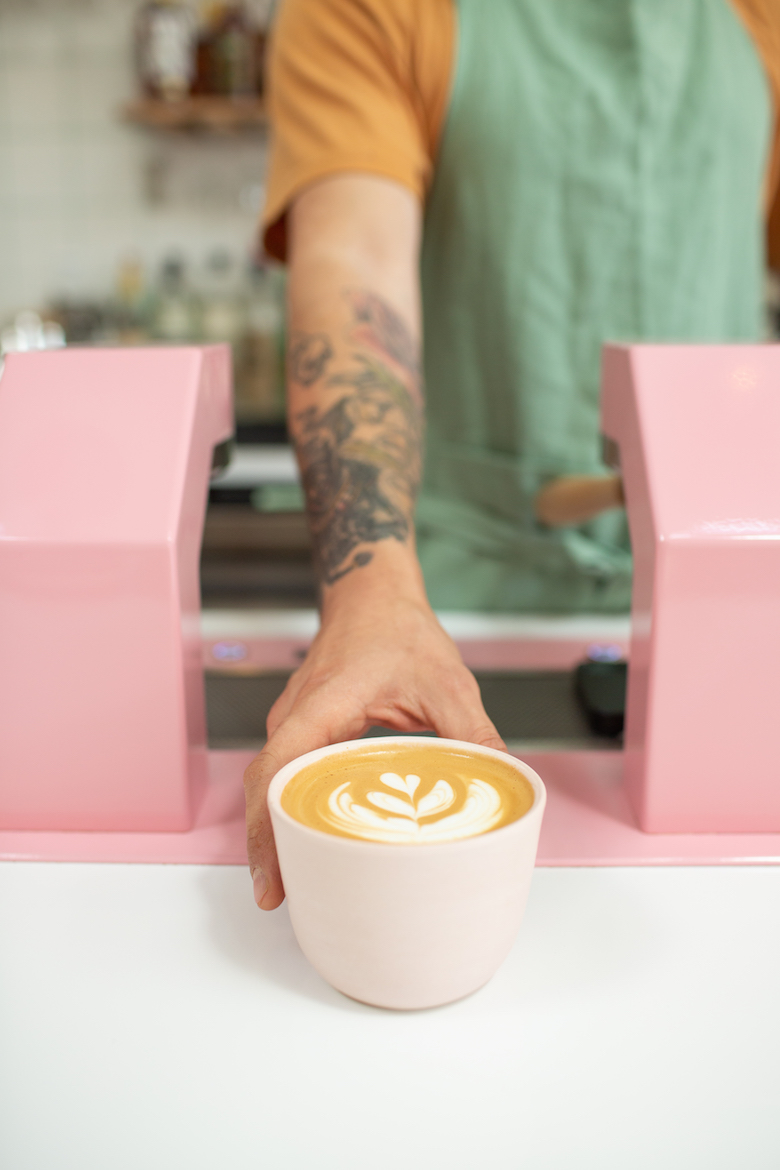 All full-time employees at Flourish earn $21.00 per hour and receive full benefits.

“I could just build it into the prices, but I want to be transparent with my guests and staff, so we can make sure everyone is treated well and paid well here,” she says. “I am not willing to run an unethical restaurant.”

No longer working under the whims of bad bosses, Kravitz is focused on making life a little better, sweeter and more liveable for others. And for herself.

Flourish Bakeshop and All Day Café is located at 6 Railroad Avenue in Glen Head. For more information on Flourish, please visit the café’s website at flourishbakeshop.co.