Slurp your way through summer. 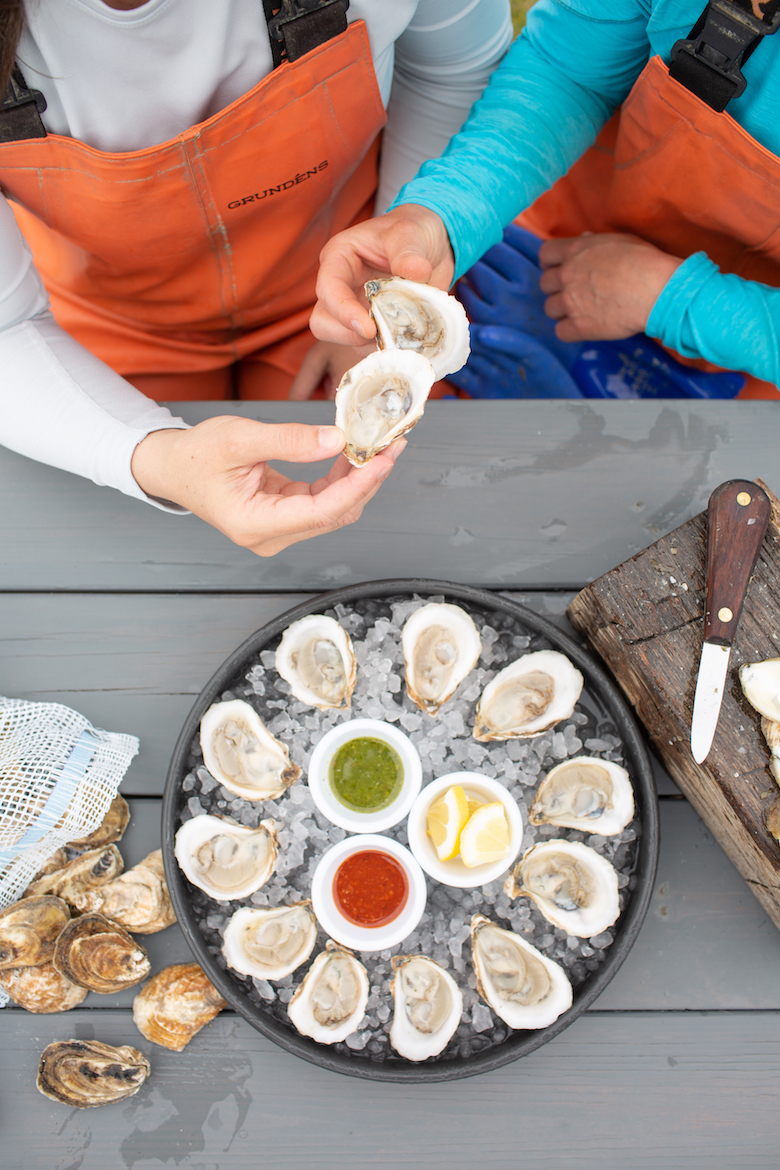 Long Island is home to more than a dozen oyster farms, like Little Ram Oyster Co. (pictured above) in Southold.

From the Long Island Sound to the Peconic Bay and every watery crevice in between, Long Island oysters are, by all means, an ode to the island themselves. The Crassostrea Virginica, the native East Coast Oyster, is simply part of the heritage here—and an unmistakable expression of our local terroir.

“It allows us to be so connected to the beautiful, bountiful [waterways] of Long Island,” says Sue Wicks, founder and farmer at Moriches-based Violet Cove. “It’s actually kind of magical.”

And it’s not just about the eating, either. With a conscious eye towards a more sustainable future, these oyster farms are playing a critical role in the environment, one that’s reverberating through all surrounding bodies of water.

“The most inspirational part about it was the environmental impact each oyster has,” says Elizabeth Peeples of Southold’s Little Ram Oyster Co. “We knew we loved to eat oysters, and that oysters were really good for us, but we really had no clue how good they are for the environment.”

There are more than a dozen oyster farms throughout Long Island’s waters, each producing uniquely-flavored specimens that are reflections of the area in which they’re grown (or, in oyster speak, reveal our region’s true ‘merroir’). Here are a few local oyster farms really shucking worth checking out.

Blue Island Oysters
Growing “genuine Blue Point oysters after decades of not being available,” Blue Island Oysters sits close to the Fire Island Inlet, taking advantage of the water exchange that happens between the Atlantic Ocean and the Great South Bay. This produces an oyster with oceanic bright salinity and buttery texture with a clean mineral finish.

Founded by Chris Quartuccio, who’s known to scuba dive for fresh oysters and deliver them daily to chefs, Blue Island Oyster has taken a unique approach to educating the public about the world of oysters and oyster farming.

“For years we had chefs and different media outlets coming from around the country to visit our oyster farm and learn about oyster production and where the oysters they were selling, or seeing, are produced,” he says. “Years into doing that with all the great feedback we decided to open it up to the public so that everyone would have the opportunity to see the tools and tactics of boutique oyster farming.”

Great Gun
“We put a lot of effort into identifying the different elements of merroir on our farm and how they potentially contribute to the varying flavor of our oysters. It’s surprising how much the flavor of our oysters varies by where they are located on the farm and the time of year,” says Paul McCormick, owner of Great Gun, which is located in Moriches Bay. A former commercial clammer, McCormick returned to Long Island waters in 2012 when he heard the first rumblings of small-scale oyster farming taking place on Long Island.

“I jumped in headfirst and never looked back. I got a second chance,” he says.

Great Gun oysters are harvested year-round, all 52 weeks of the year. McCormick also grows kelp alongside his oyster farm.

“Kelp is a distinct flavor we’ve noticed in the finish of our oysters from time to time. This may be due to our sugar kelp or the naturally occurring Saccharina longicruris, another similar species of kelp we see on the farm, or maybe something else entirely,” he says. 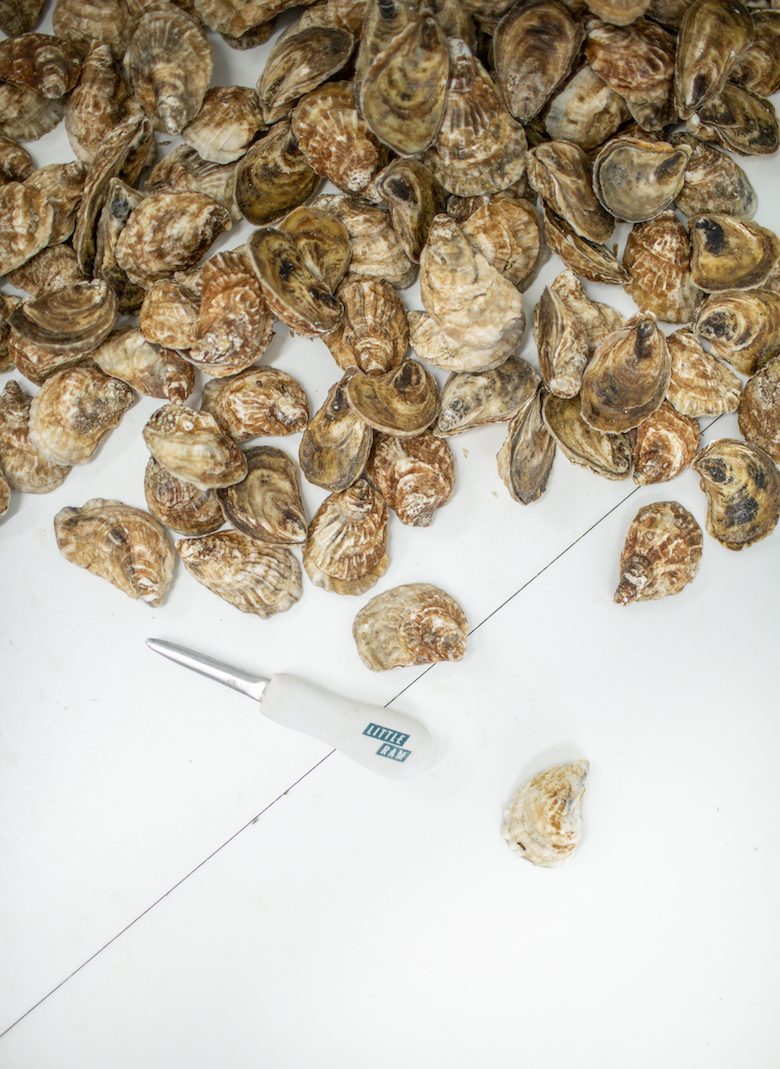 Little Ram Oysters are prized for their clean, delicious taste.

Little Ram Oysters
For Stefanie Bassett and Elizabeth Peeples, all it took was a longing to change careers and a shucking class at Greenpoint Fish and Lobster Company in Brooklyn, NY to turn Little Ram Oysters into a reality.

Located in Gardiners Bay on the east side of Shelter Island off Little Ram, the duo’s oysters, says Bassett, “taste like vacation.”

“Our oyster is a well-balanced oyster with just the right amount of salinity and complexity of the ocean. Medium in size, our oysters have crisp minerality, medium salinity, and are clean and delicious,” says Bassett.

Violet Cove
Oyster farmer Sue Wicks did not start her career with the thought of aquaculture. The former WNBA player did, however, always feel the pull of Long Island’s waterways, as they were important to her family growing up.

“My dad was a bayman and so many [other relatives] have all worked on or around water. I fell so in love with this process,” she says.

Nestled between two ocean inlets is Violet Cove, where Wicks also has fresh water springs underneath the oyster farm. The fresh cedar pine and the minerals of the water, along with the boutique technique she uses to grow and harvest them, has made the Violet Cove oyster one that is truly one-of-a-kind.

“Just like real estate, oyster farming is all about location. It really has an impact on the flavor of the oyster,” she says, noting that even neighboring oyster farms produce oysters that vary in taste.

Wicks says the best time to down an oyster in the Northeast is between December and January, as the Violet Cove has “a sweeter, more almond-forward flavor in these months,” while in the spring, there is more of a “bright, briny front and the finishing taste is not as present.”

Like Paul McCormick at Great Gun, Wicks is also growing kelp alongside her prized Violet Cove oysters. Will it change the flavor of her oysters? Wicks is looking forward to finding out. Only time will tell.