The Recipe for Sobriety on Long Island

Getting cooking after putting down the bottle.

Local chefs like North Fork Table & Inn’s Stephan Bogardus (above), on getting cooking after putting down the bottle.

Teetotaler. It may not be a word you associate, say, with “chef.” And yet, there is a growing population of chefs who have made the pointed decision to abstain from alcohol. As the holidays approach—that season of giving, tradition and boozy indulgence—it is worth checking in with local industry stalwarts who have opted not to partake.

The kitchen can be a frenzied, high-octane space, where alcohol feels like the natural antidote to the cadence of a busy night. There remains a certain commiseration in joining one’s colleagues at the places still open to customers after a kitchen has closed—namely, the bars. But there is also room at the proverbial table for a new kind of chef. It’s an emerging narrative, populated by such well-known poster children as Sean Brock, the now drink-free chef of South Carolina’s Husk.

Why are chefs compelled to drink, often with abandon? It’s the atmosphere, sure, the late nights, the accessibility. But it’s also the adrenaline, the nonstop pulse of service that lingers after hours, that unwelcome specter. Fall asleep to the blue bruise of television light one too many times after a night in a restaurant and you, too, may see the logic in using a drink—or two or three—to accelerate things. “You never take your foot off the gas, and you’re going 100 miles an hour for 17 hours a day,” Almond chef Jeremy Blutstein says. “So, as soon as you get off, what do you do? This industry consumes you on every level. You get to shut your brain off. And you justify it by ‘work hard/play hard,’ and you also justify it by ‘I need to be social,’ and then that consumes you.”

“You never take your foot off the gas, and you’re going 100 miles an hour for 17 hours a day,” Almond chef Jeremy Blutstein (above) says.

To shut his own brain off at the end of service, Blutstein fell into bar culture, with its rotating cast of characters. He drank until, several years ago, following a New Year’s bender, he decided to stop for a week, which became two weeks, and then a month. “And then,” he says, “it wasn’t if I could do it; it was: I’m doing it.” Chef Blutstein has maintained his sobriety for a number of years now in the face of grueling restaurant work. “I could say a million times over and over again that I didn’t have a drinking problem,” he says, “but the reality is that anyone who drinks has a drinking problem.” In the end, he was lucky, never hitting a perceptible “rock bottom,” never losing everything—or nearly everything—to the bottle. Still, he had an inkling that life, both on the line and off, would be better once he quit. So he did. His outlet now, to burn off that late-night buzz, is exercise, conducted post-work, in his own basement.

Jeremy Blutstein at home with his tools to unwind after working a shift at Almond.

Jeremy Blutstein is just one of many East End chefs who have abandoned alcohol in the interest of a better life. At the North Fork Table & Inn, chef Stephan Bogardus is celebrating six years of sobriety. His story is decidedly less rosy than chef Blutstein’s. At 19, Bogardus lost his driver’s license due to driving under the influence. A year later, he was arrested for drinking and driving on a conditional license. “I had everything going for me, and, from the outside, it looked alright, but on the inside, there wasn’t an off switch,” he says. The North Fork, where Bogardus grew up, has, he says, a substantial drinking culture, and high school– and college-aged indulgences began, in time, to take a darker turn. After testing the waters of sobriety at 23, Bogardus began drinking again.

“Once I couldn’t keep my booze down anymore… once I realized that the medicine wasn’t working, I started really looking for help,” says chef Bogardus (above).

“I was suffering from the DTs [delirium tremens],” he says. “I chose alcohol over food for a period of about four weeks. I was about 140 pounds—and I’m six foot two. I developed bleeding ulcers and I was vomiting blood. In my mind, it was still a question of whether or not I had a problem.” Chef Bogardus, having reached a physical rock bottom, was forced to confront his reality. It wasn’t the manifestation of his illness that brought him down, really. It was the inability to self-medicate. “Once I couldn’t keep my booze down anymore… once I realized that the medicine wasn’t working, I started really looking for help,” he says. He was, as he put it, “a hard-core, real alcoholic.” He went cold turkey (not a recommended method of alcohol detoxification, to be clear, as it can lead to fatal grand mal seizures) and continues to live a life of abstinence, meditation and, most importantly, routine. “The idea of staying rooted in a routine is really helpful. You’ve got to ask yourself what you need and you’ve got to give it to yourself,” he says. Chef Bogardus’s routine, over half a decade later, includes twice daily meditation, as well as a silent ride home on his motorcycle, which allows him to distance himself from the stressors of work. 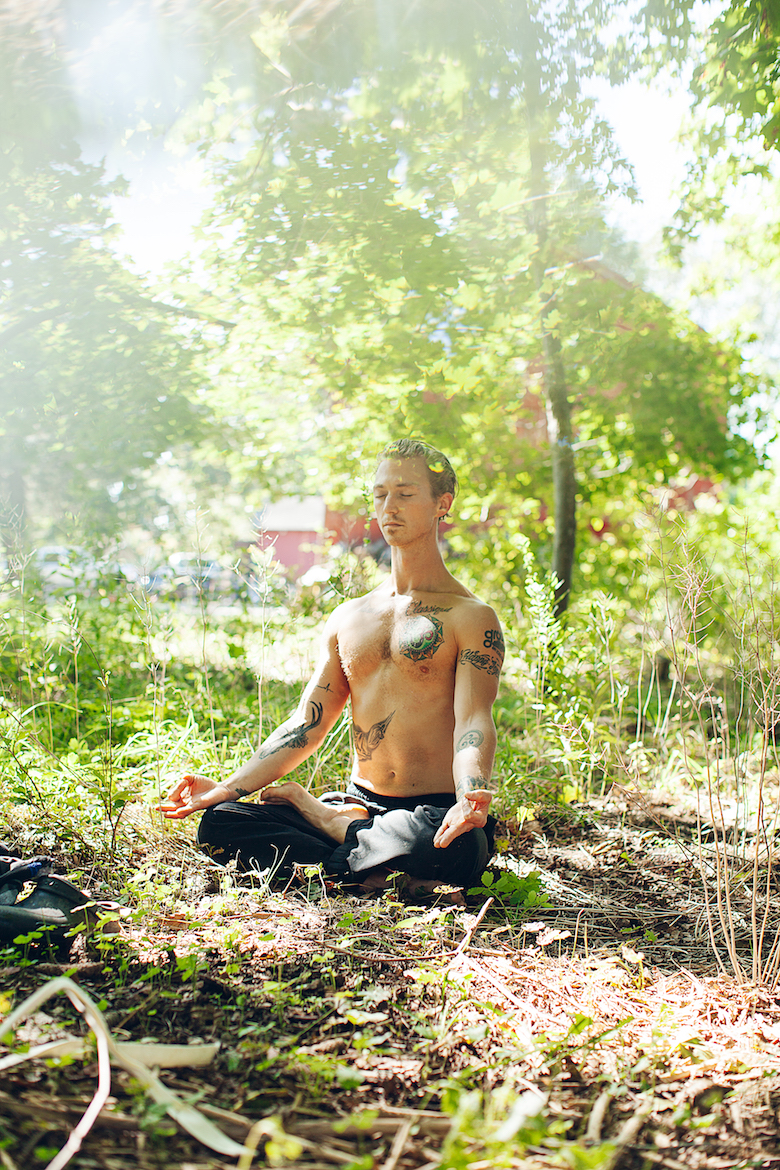 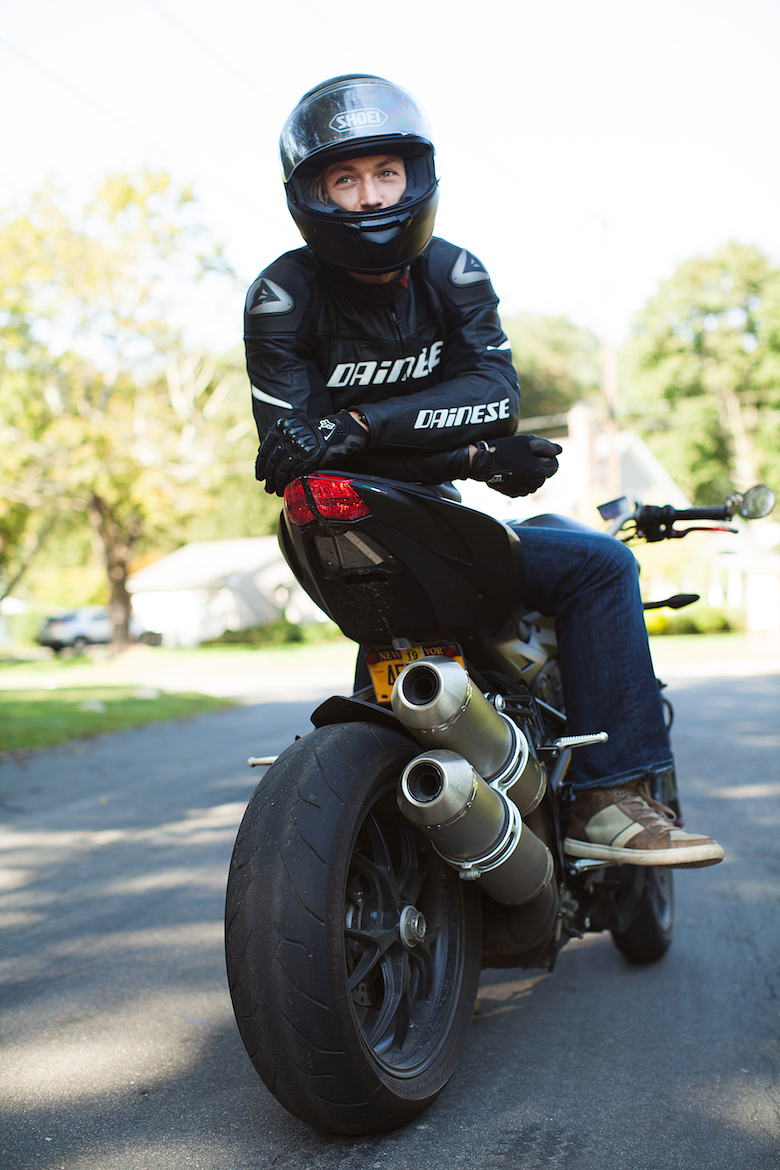 For some sober chefs, that relief comes in the form of other physical activity. “[My husband and I] have this thing that we call happy hour, where we go out pretty much every evening and that’s our unwind,” Sag Harbor–based private chef Aura Winarick said of her nightly paddle boarding pastime. “We unplug and we go out there and talk to each other and imbibe in nature.” Chef Winarick cut her culinary teeth in New York City restaurants in the 1990s, where, to hear her tell it, it was “work hard, play hard … and it was definitely fun.” She then moved on to Restaurant Associates, working as a corporate chef for large companies, like Condé Nast. “There was a lot of partying and a lot of drinking and a lot of drugs,” she says. “It was a hard and fast life.”

Chef Aura Winarick unwinds on a paddle board with her husband in Sag Harbor.

After accepting a position to cook privately for the late news anchor Peter Jennings, chef Winarick relocated—first temporarily and then permanently—to the East End. Her work, involving a “niche clientele,” involves catering to the specific culinary demands of the Hamptons elite. Chef Winarick now describes her relationship with alcohol as an allergy. “It had stopped bringing me relief and joy,” she says. “It was no longer fun. There was more pain than pleasure; the obsessions far outweighed the recreation. And it had become an allergy for me. If I put alcohol into my body, I’m not quite sure what will happen—to me or to anyone around me. Some people are allergic to strawberries. They don’t eat strawberries anymore. I don’t drink alcohol anymore.”

Aura Winarick has been sober for the past 12 years—in a row, she jokes—and credits her sobriety with the community she has built for herself. “I don’t do it alone. I like to surround myself with other sober people. I have a lot of sober friends, and a sober husband,” she says. “Having strong support and a sober community is very important. I couldn’t have done this alone.” The exterior of her life, chef Winarick says, remains largely unchanged, but she returns, over and over, to one word: Present. “Now, I’m fully present for those intimate interactions with my client,” she says. “I’m part of the client experience. My instincts are different now. My instincts are not to drink.” In her earlier moments as a chef, before the tack toward sobriety, such clarity may have eluded her, but, as with other chefs who have changed their approach to the landscape of food and alcohol, she has found, in sobriety, a deeper connection with her work.

Sometimes, sobriety on the line is the natural progression of finding oneself. “My life is easier when I’m not drinking, and as a result, the people I work with and my family are more connected to me,” offers an East End chef who, due to his integrative relationship both with the community and with Alcoholics Anonymous, has chosen to remain anonymous. He described drinking as a lonely enterprise, colored by chaos. “In my case,” he says, “alcohol opened the door to the devil, and I was able to learn how to avoid opening that door. I had to learn the tools of sobriety.” One of those tools, it turns out, has been to create a network within the community, helping others with similar addiction problems. “I reach out to people who need help, and, in doing so, on occasion, the people around me see me doing it, which helps them to build confidence in me, which means that my channels become more progressive rather than regressive,” the chef says. “So I’m moving forward with my reactions.”

Routine. Community. Finding an outlet. Kitchens may be cutthroat, particularly at the holidays, when the appeal of a drink can taunt even our better angels. But if the season feels particularly fraught with the weight of temptation, Stephan Bogardus offers some solace. “It’s like you get a whole new life,” he says of his sobriety. “It’s like you’re getting what you have, times 10.”