This article appears in Spring 2019: Issue No. 26 of Edible Long Island.

Is there really such a thing as a ‘skinny cocktail’? And more importantly: Should there be?

Ariana Fishman, bar manager of the Brixton in Babylon.

Recently, a guest asked Ariana Fishman, bar manager of the Brixton in Babylon, which of their spirits was sugar free. “I didn’t know how to respond,” Fishman says.

In our increasingly gluten-free, sugar-free, paleo, low-calorie world, this is a fairly unsurprising request. Our collective obsession with weight and Goop-like “health” trends are working their way into cocktail culture, potentially missing the point entirely of why we imbibe in the first place.

With health magazines preparing readers to keep their weight-loss, health-focused New Year’s resolutions, I flipped through the December issue of Shape to find a full-page spread on “healthy cocktails.” Each of the drinks listed took classic combinations—vodka and soda, bourbon and sweet vermouth—and added an ingredient purely for the appearance of health. These drinks were mixed with orange, grapefruit and green juices, without acknowledging that along with the quick hit of vitamins came added sugar and calories, all while sacrificing the flavor—and art—that goes into making a cocktail. 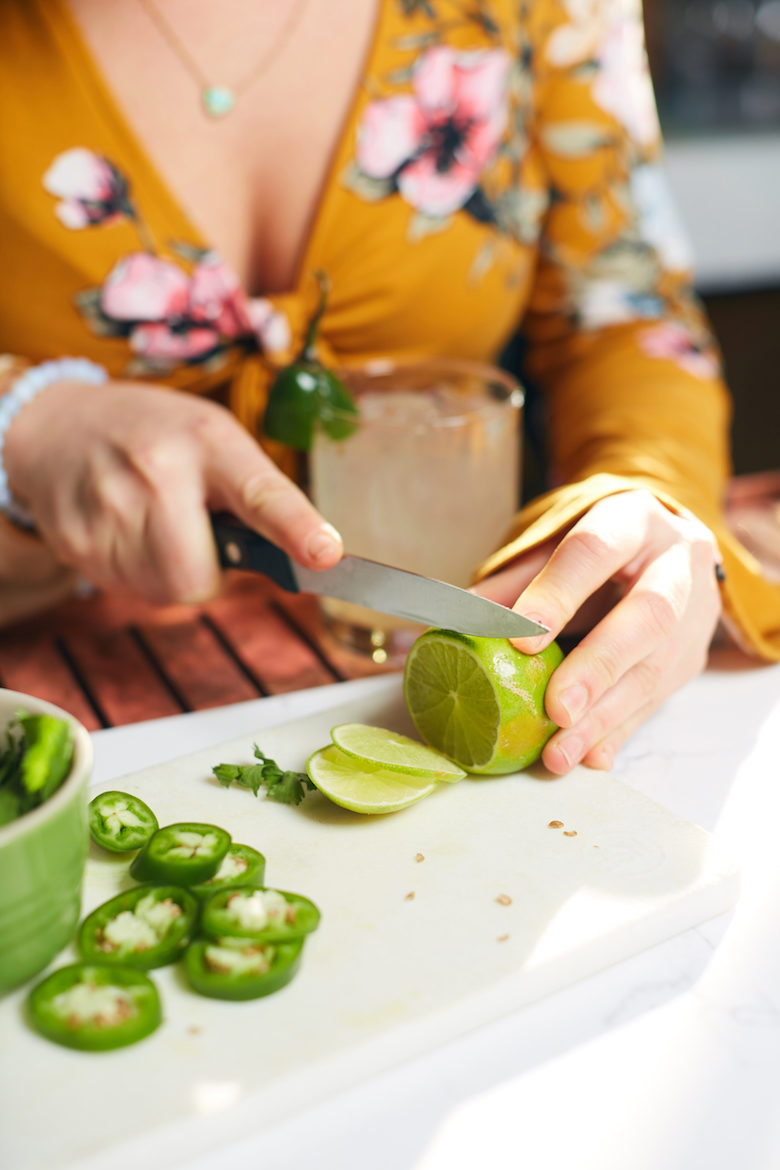 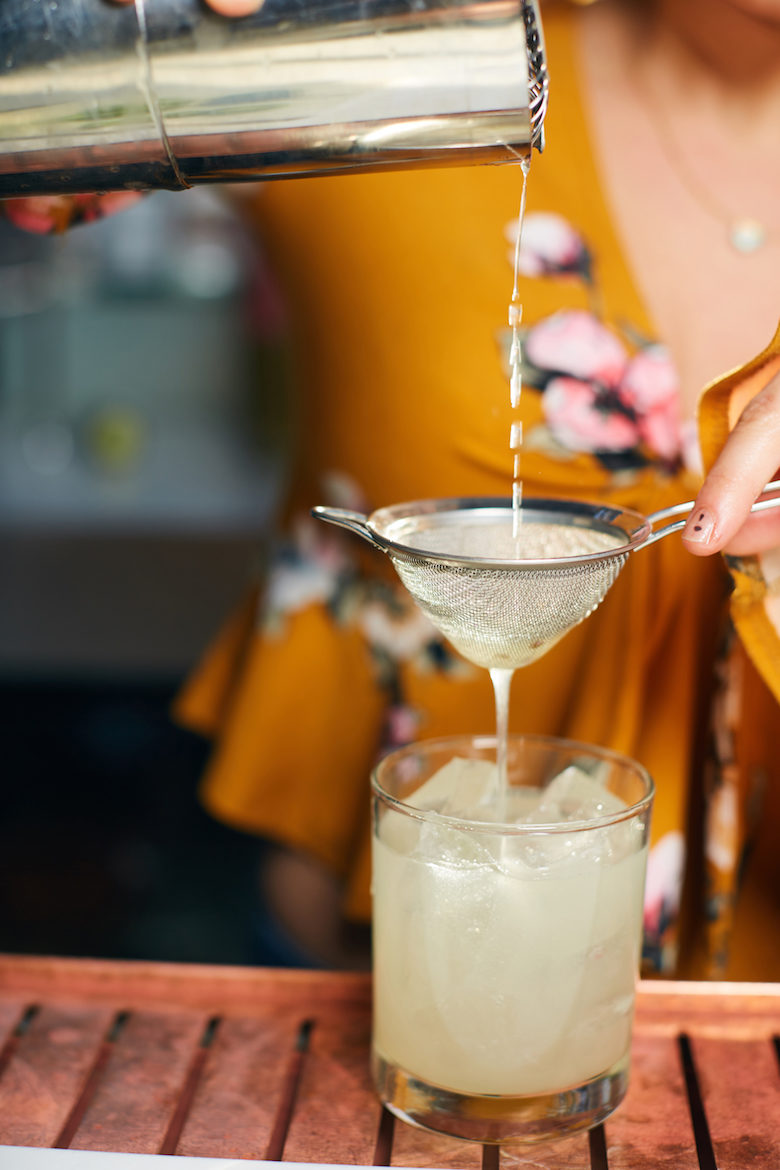 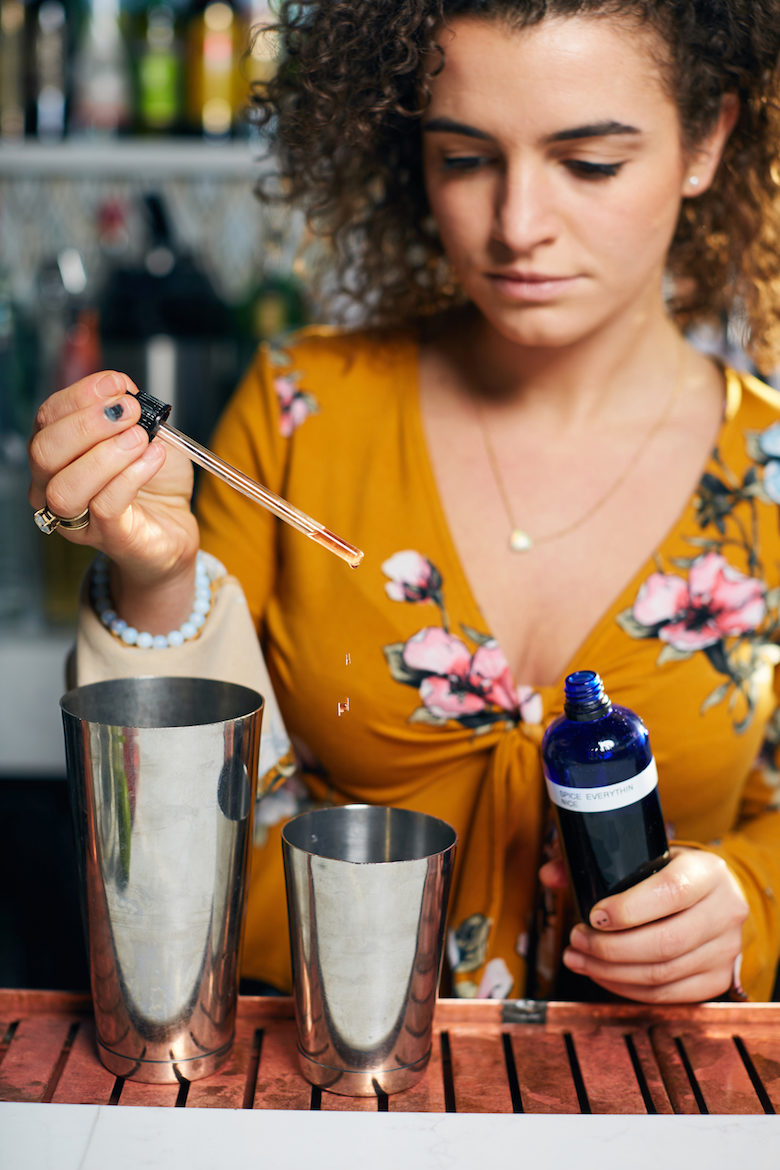 It’s not uncommon for bartenders to incorporate juice into their cocktails; more than half of a Paloma is fresh grapefruit and lime juice, with tequila playing a supporting role. But adding juice to a drink is not a haphazard health decision. It’s because the drink demands acid or sugar or a rounder mouthfeel. Creating a cocktail takes time and the sort of experimentation often reserved for a chemistry lab. Health is typically not a consideration when making a cocktail, even one that includes fresh ingredients with the power to improve a drinker’s health.

But “fresh ingredients” is not shorthand for green juice, and these ingredients in question are not always used in their raw form.

At Tullulah’s in Bay Shore, bartender Bert Wiegand begins thinking about the bar’s spring and summer cocktails in January. The bar and restaurant keeps a garden off their patio, and Wiegand says he can expect a variety of herbs to return when the frost thaws. He works closely with the restaurant’s kitchen to see what fresh ingredients will be coming in that can be used in cocktails. Recently, they lucked into a crate of blood oranges, which were used for a cocktail special, and a housemade quince jam that the kitchen was using in a baked brie was cross-utilized in a whiskey cocktail.

“Mint grows like a weed out [in the garden],” says Wiegand, noting that, as a result, he and his team play around with creative ways to use the abundance of the herb that, on its own, aids in digestion and can improve your post-dinner bloat. The refreshing, slightly biting leaves complement the sugar, rum and lime in a classic Mojito. “But say someone orders a mojito without sugar,” says Wiegand. “What is that? Is it a mojito? Not really. Is it going to taste like one? Probably not.”

Sugar, in any form, is persona non grata in the dieter’s orbit but necessary in nearly all cocktails—the irony of which is not lost on those in the beverage industry. Alcohol is produced through the process of fermentation, which relies on sugar, added or natural, to transform raw ingredients into alcohol. Rum is derived from sugarcane, tequila and mezcal from agave; so when someone orders the “skinny” version of a mojito or margarita, there’s no way to remove all the sugar.

“Taking any cocktail that’s on our menu right now and removing the simple [syrup] or another sugar that’s in there, or a liqueur that they don’t want because it’s sugary—it’s not the same [drink]. It’s not going to be the cocktail it’s supposed to be,” says Wiegand.

Rather than concern themselves with developing a roster of sugar-free cocktails, Wiegand, Fishman and Billy Miller, owner of Restoration Kitchen and Cocktails in Lindenhurst, are focusing instead on incorporating natural ingredients into their drinks that complement the spirits and the season. Miller is happy to offer his customers a raspberry vodka and soda, but you won’t find Stoli-Raz on the menu. 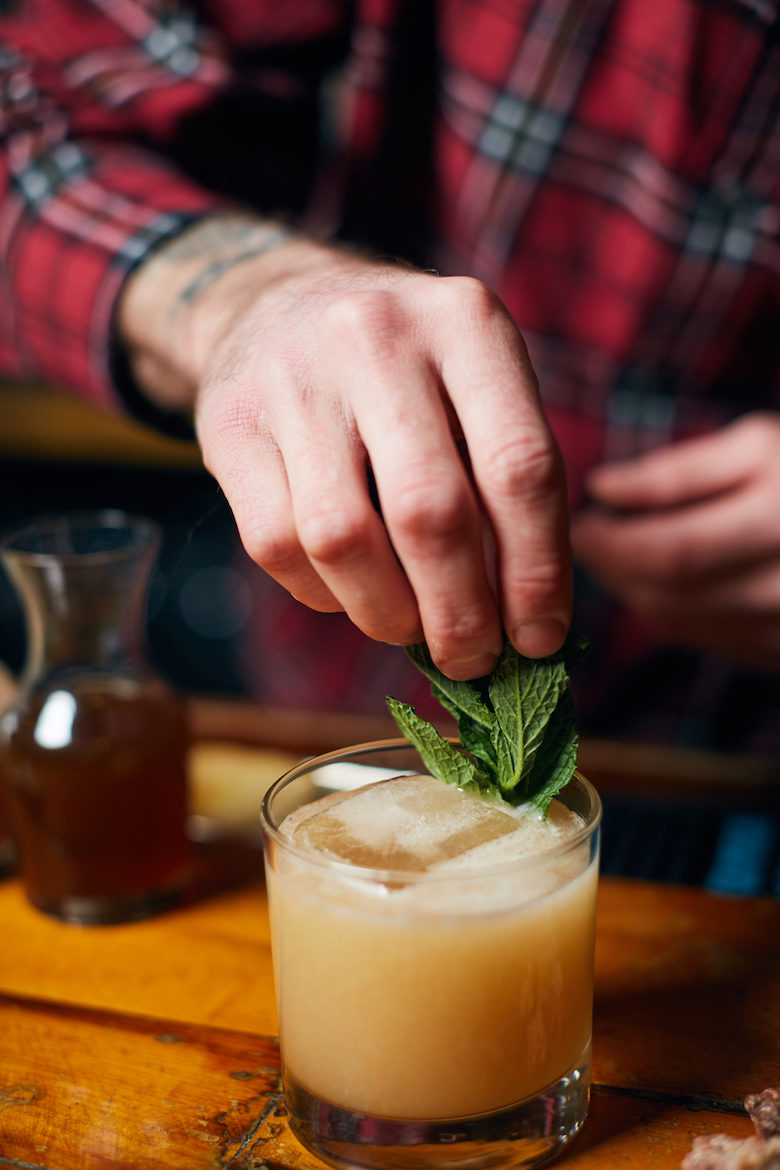 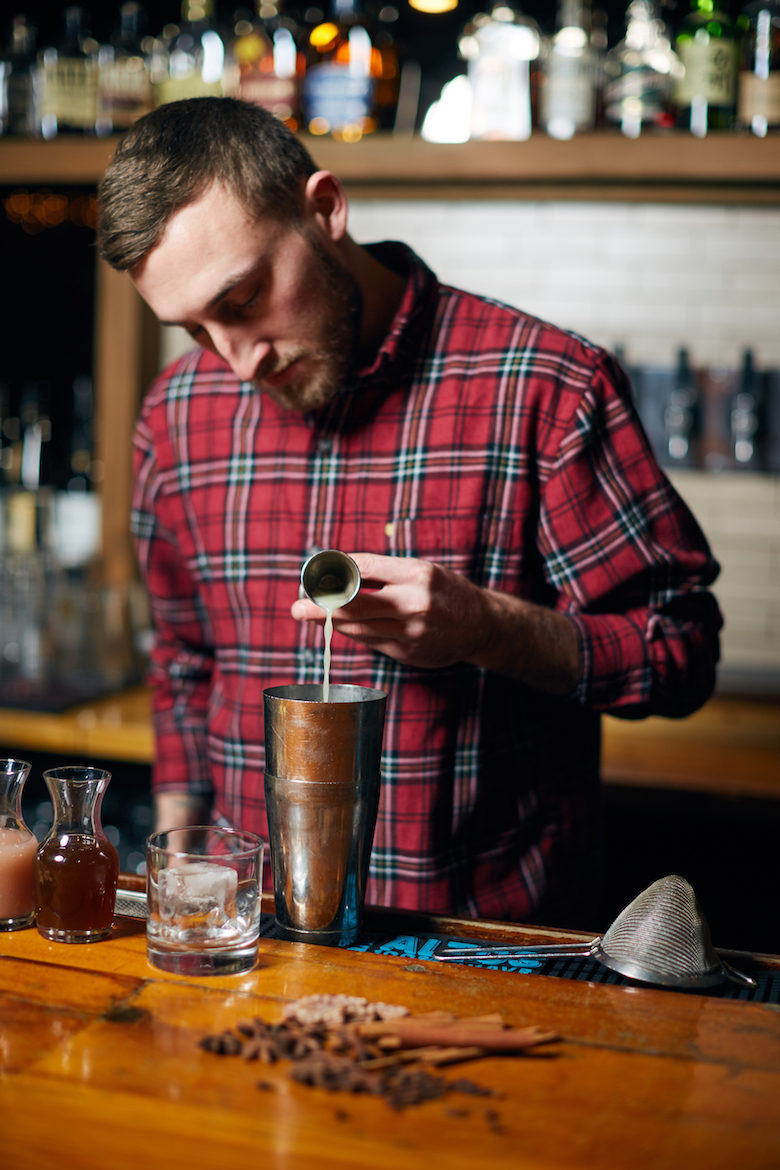 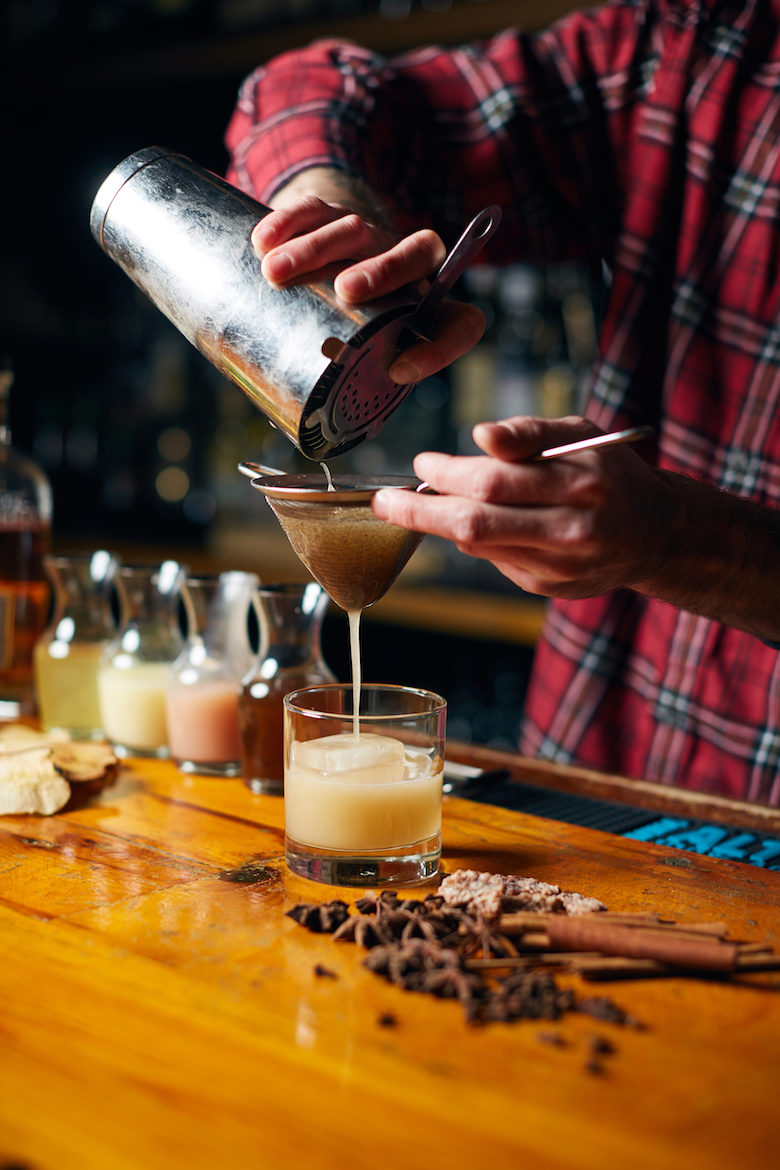 “As an former teacher, I want to teach [our guests] about the real flavors of things. I want you to come in here and want a raspberry vodka and soda … and I’m going to give you a syrup we make from fresh raspberries with a great spirit.” But he also knows his passion for natural flavors may not please everyone, which is why he’s willing to give his guests the chance to taste drinks his way without asking them to pay for a cocktail they may not enjoy.

Miller relies heavily on botanical flavors, preferring the wintry feel of rosemary as a complement to his list of bourbon cocktails, and each spring considers new ways to add lavender to his menu. “It’s pretty but it’s also versatile,” he says about the flower, which he uses in syrups, infusions and as a garnish for their cocktail menu.

At the Brixton, Fishman and her bar team are also fond of fresh herbs, using a roasted sprig of rosemary to add a smokey depth to their gin Fired Guy cocktail. All their syrups, including grenadine made with pomegranate that lacks the neon color you’re accustomed to, are made in-house, as are their infused spirits. Fishman also experiments with housemade shrubs and bitters, using ingredients like asparagus and zucchini, to add new flavor profiles for her spring and summer menus; traditionally added to cocktails for their acidity or a concentrated dose of flavor, both shrubs and bitters carry medicinal benefits as well and can be sipped on their own or with soda water to improve digestive health and increase energy.

Skinny and sugar-free cocktails ignore the history of imbibing, which is rooted in health.

Skinny and sugar-free cocktails ignore the history of imbibing, which is rooted in health. British officials stationed in India added tonic to their gin not for balance but because it contained quinine, a prophylactic against malaria. During Prohibition, alcohol, a powerful antiseptic, was available for purchase from a pharmacy. Absinthe was once considered an anti-parasitic until its psychoactive effects on the brain were realized. And it’s no wonder that fernet is one of the most popular last-call shots—the herb-loaded digestif is said to cure your hangover hours before it begins.

But spirits are more than their flavor and complex healing properties. Cocktail culture also gives us a sense of mental well-being. We drink to celebrate and socialize and to blow off steam; it is a bartender’s job to sense which way their customer is leaning and, when asked, to be an open ear.

“[One of my regulars, a nurse] has really bad days and really good days but comes in no matter what,” says Fishman. “She knows this is a place where she will be taken care of, with friends or on her own.”

Other guests come with the specific intention of crying over their drink, knowing they’re in a safe place when at her bar. Similarly, Wiegand has a regular whose drink of choice is an IPA, but Wiegand has learned to read this guest’s mood and knows when to pour a few fingers of bourbon and slide it alongside their beer. Libations, in these instances, provide a landscape to be yourself, in that moment. With that in mind, Miller designed Restoration to promote socializing; the bar is laid out so you’re face to face with other guests and long, communal tables encourage conversations with strangers.

Developing cocktails is an art and by removing or substituting ingredients, we dismiss the artist’s talent and close ourselves off to the power of a cocktail and the centuries-long culture built around it. “If your destination is drunk,” says Wiegand, “a vodka soda will do the job without hindering what we’re doing [behind the bar].” But wellness as it relates to drinking is not about sugar content or calorie counts. It’s about indulging your senses and releasing your mind over a cocktail—one that another person or a team of people created, after weeks of thoughtful tinkering, purely for your enjoyment.