The meaning of Christmas is clear for this family of Salvadoran immigrants.

Roughly seven days and 90 miles separated Nazareth from Bethlehem, at the time of Mary and Joseph’s walking. It was time they didn’t have, given Mary’s advanced pregnancy, and a distance they shouldn’t even have considered traversing. The route would have been rocky and full of hills; the weather, at night, the sort that lends itself to shivering.

At Christmas, we celebrate Jesus’s birth, the miraculous end to the nativity story; but ones of its morals, for me, has always resided in Mary and Joseph’s almost equally miraculous journey. Look, it says, at the literal lengths parents will go to protect and provide for their children. Rejoice, it says, in the one form of human love that’s holy.

In 1983, José Garcia undertook a similarly unlikely journey. He was just 19 and recently married, his first daughter’s birth just days away, when he began to walk from Usulután, El Salvador, to Brooklyn, a trip made mostly by foot, that would span nearly 3,500 miles and 11 days.

“I was so nervous to leave my family,” recalls José, his voice soft and heavy despite the 35 years that have passed between then and today. “I cried, because my daughter was there, my wife was there, but I needed to leave. The [Salvadoran] civil war was underway; thousands of people were dying and, by its end, over 75,000 would be murdered. So I left to earn enough money to save my family. For our future, things had to be done and I was the only one at the time that could do them.”

So that’s what he did. José arrived in New York and quickly began work washing dishes at a Greek restaurant in Brooklyn. 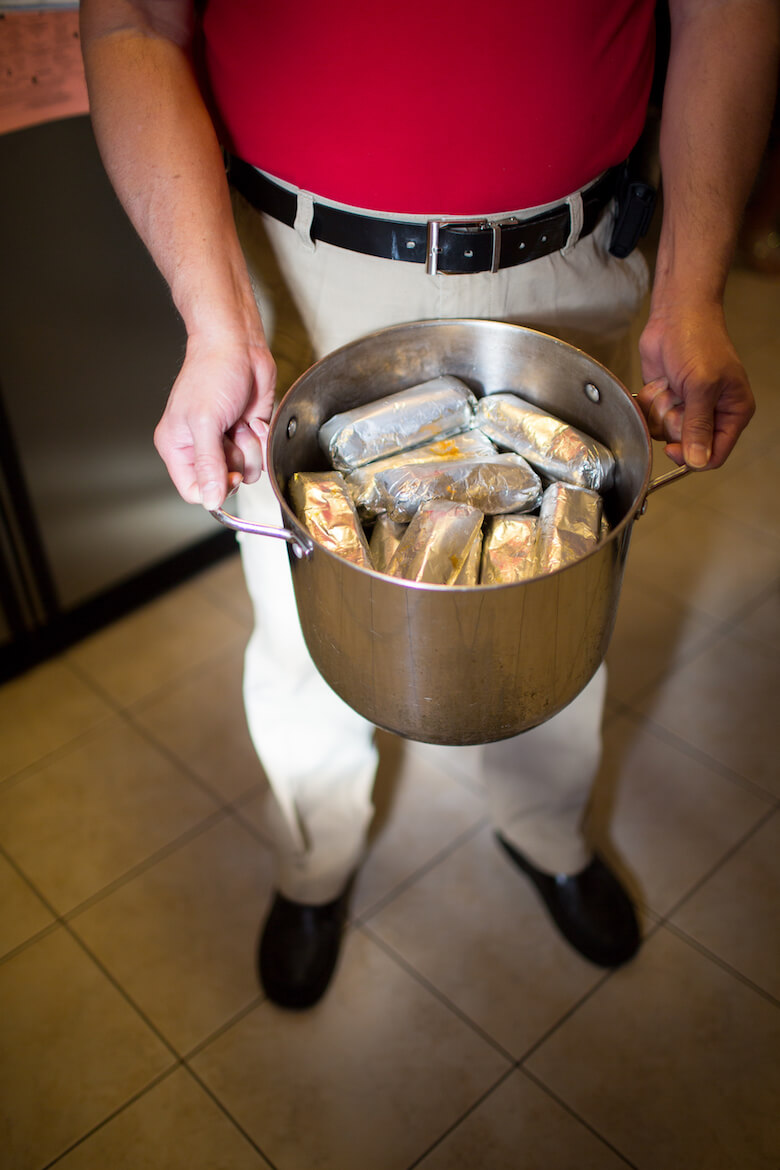 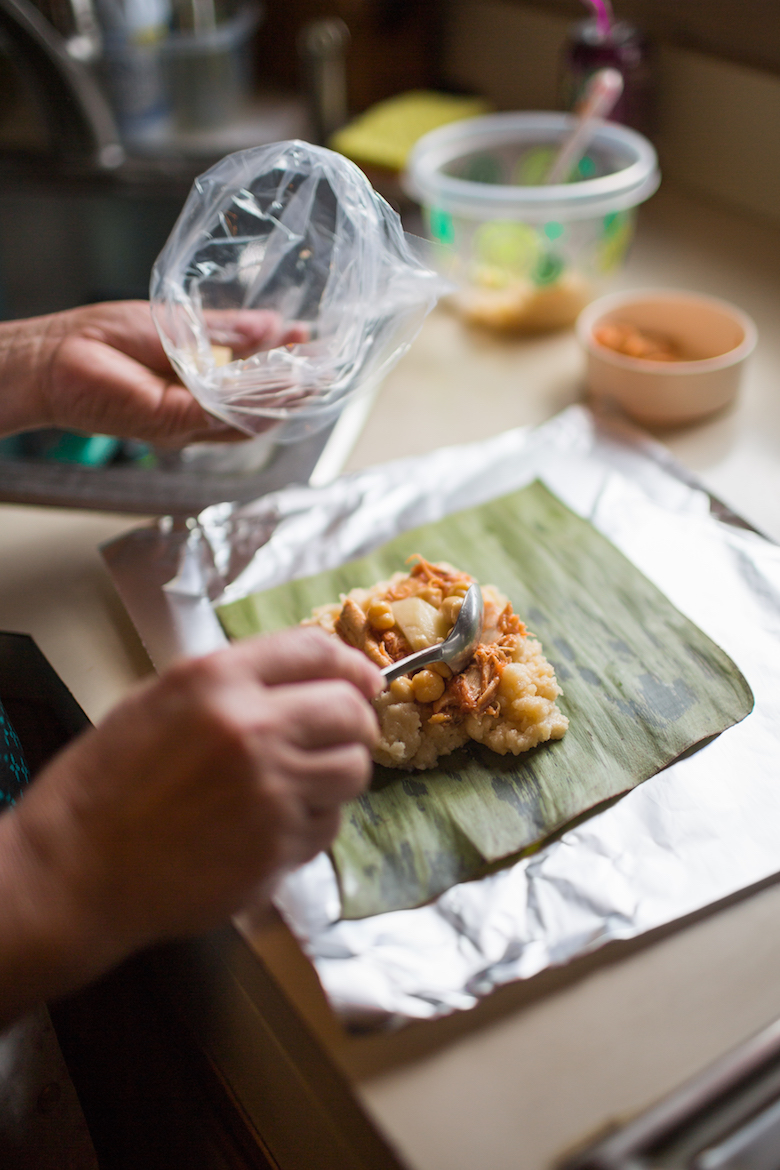 “Working there, that was the first time I had Greek food,” José says, smiling at the memory of his first bite of moussaka. “I loved it. That was also the first time I learned to cook. In my country, men weren’t ever allowed in the kitchen, so working my way up to cooking at the restaurant was very exciting and new.”

Within a year of working, José was able to obtain immigration papers for him and his wife, Teresa—but not for their then-one-year-old daughter, Nancy. And so, at just 19, Teresa was forced to make an impossible choice: Remain with her daughter in El Salvador, or join her husband in New York.

“I left Nancy with my in-laws and moved to Brooklyn to be with José,” says Teresa, with the help of her English-speaking daughter, Brenda. Brenda is Teresa and José’s second daughter, but their first to be born in New York. “It was incredibly hard for me to adapt. How could I learn to live without my daughter? It didn’t feel like home until Nancy came.”

Nine years of paperwork would pass before then. Brenda would be born, then Jessica, the youngest of the Garcia daughters. There would be innumerable trips back to El Salvador, first to introduce Nancy to her sisters and then, repeatedly, to help them all feel connected to one another.

This is obviously not the miracle the Garcias celebrate each Christmas, but the improbability of their all being together, in a house they were able to purchase through hard work alone, certainly increases the degree to which they celebrate.

“For us, Christmas starts about a week before,” laughs Brenda, a 32-year-old professional who shares an adorable four-year-old son, Thiago, with her husband, Jimmy. “Mom basically does everything, but we have to buy whatever she needs for the tamales, the breads, the horchata. About 60 to 70 people wind up coming each year, so we basically need enough to feed a small army.”

Take one look at Teresa’s kitchen and you’ll see what her daughter means. On the stove there is a heaping pot full of chicken tamales, each one perfectly wrapped in a banana leaf, as is her family’s custom, and another huge pot full of horchata that Teresa will transfer into pitchers by the ladleful. On the counters, an overflowing platter full of panes con pollo—traditional Salvadoran chicken sandwiches with cabbage, watercress, sliced cucumber, radishes, mayonnaise and tomato sauce—that guests will struggle to fit into their mouths; an entire basket full of Salvadoran pastries from nearby Victoria Bakery in Central Islip; and more.

Pasteles from Victoria Bakery, a Salvadoran bakery in Central Islip.

Teresa surveys the fruits of her labor with pride. Her daughter asks her what she loves about cooking and she stretches her response—“everything”—into a song. Despite hours of cooking, Teresa’s kitchen is immaculate, and the feast she’s made is so abundant and fragrant she has to shoo away her family’s hands from her pots, pans and dishes like overeager flies.

“The difference between our lives here and the lives we would have had, had we stayed in El Salvador, is not lost on us,” says Brenda. “The poverty there is so bad. There are no jobs. You get paid $5 a day and no one can live on that; it’s not even cheap to live there. In the city where my parents come from, it’s not uncommon for a family of four to split a single egg.”

In Brentwood, when their guests begin to arrive around 7:00 p.m. on Christmas Eve, the Garcias won’t have to split anything but their time. As if Teresa’s spread isn’t large enough on its own, it will soon be supplemented by all the dishes the rest of the family will bring along as they arrive. In her apartment upstairs, for example, José’s sister-in-law has already prepared her legendary budín for dessert. Like everyone else, she and her husband, José’s brother, will arrive ready for two things: to share and to eat.

One thing they won’t do: Discuss politics. Like so many families, the younger and older generations don’t quite see eye-to-eye. On one subject, however, everyone is in agreement.

“We feel safe living in Brentwood,” says Teresa, matter-of-factly. “The gang isn’t a concern of ours at all.”

By “the gang,” of course, Teresa means MS-13; and despite the Garcia home being just three miles from the “bloodstained killing fields” President Trump described in his 2017 speech in Brentwood, there are no signs of blood or violence here—or anywhere in the immediate neighborhood.

“We know the MS-13 gang has given us a bad reputation,” says Brenda. “But before we moved here, we had never even heard of it. In Brooklyn, everybody is more liberal. We grew up around all different ethnicities. When we would tell people our family was from El Salvador, people would ask us what part of Mexico that is. So when we first moved to Brentwood, belonging to such a large community of Salvadorans was new for us. We went to a parade shortly after moving and my sister and I were, like, ‘What is this?’”

The answer: A town, as of 2016, of roughly 62,000 people—67 percent of which are Hispanic. In fact, so many Salvadoran immigrants, in particular, call this area home that, in 2012, El Salvador opened a consulate in Brentwood, becoming the only foreign government with an office on Long Island.

“So there was a real learning curve for us,” says Brenda, “but my sister and I both went to Brentwood High School and it was fine. Maybe it’s changed since then. My niece, for example, goes to Central Islip High School. She tells me, ‘It’s okay and it’s not okay.’ So I just tell her to do her own thing, to keep to herself and just remember she’s there to learn, not make friends—which is good advice for any high school, I guess.”

“This is what Christmas is all about for me,” says Jose Garcia. “Tonight, Christmas Eve, our entire family will be together.”

The most welcome advice, however, now comes from Teresa. “I think you all should eat,” she says, inviting her family to crowd around the kitchen table and sample the flavors they and their extended family will enjoy later on tonight. Suddenly, the sound of satisfaction fills the room. Besides the cumbia music playing in the background, all is calm; all is the tinny sound of fork and knife.

José is the first to break the relative silence. “This is what Christmas is all about for me,” he says. “Tonight, Christmas Eve, our entire family will be together. Every year we get invitations to go other places and this is why I say no. On Christmas, I don’t go anywhere. I have to stay right here, with my family, in my house.”

When you count the years and miles it took for the Garcias to arrive here, and how improbable it was in the first place, that they’d all actually arrive, it’s not difficult to understand José’s refusal to celebrate elsewhere. Brentwood, after all, has been the Garcias’ home for the past 13 years, even if the food they eat and prepare at home remains staunchly Salvadoran.

“But my sister Jessica and I have started doing our own things, too,” says Brenda. “We have Santa come at midnight for the kids, which isn’t a Salvadoran thing at all. In El Salvador, Christmas is all about fireworks, not gifts. But, like us, our kids are American. So we bring them Santa—and, oh my God, do we get them gifts.”