A Local’s Guide to Montauk

Heading out to The End? Here’s where to eat, where to stay and what to do once you get there.

The three-hour drive between my home in Oyster Bay and Montauk is along a route I’ve ridden hundreds of times. It remains one of the few places my tech-addled brain can arrive at without the assistance of Siri. Though the route, beginning in the HOV lane and ending with the roller-coaster ride of hills along Old Montauk Highway, has never changed, the Montauk of my childhood is slowly vanishing. So, on a bleary April day, I hopped into the car, cranked the Stones, Eagles and Beatles from my speakers and drove through the fog to visit the few of my treasures that still live on The End.

Being at the end of Long Island, with one road in and out, Montauk has always been a destination—one that developers, restaurateurs, hoteliers and retailers love to get their hands on. Certain town stalwarts have gone through many hands and iterations in recent years, like Ruschmeyer’s, which went from a family-run establishment to a drunk-bingo-and-club-scene to, most recently, closed, or Duryea’s, the popular, no-frills BYOB lobster spot that bore the name of its owners and was sold for several million dollars to someone who increased prices but kept the paper plates.

The few locals who remain cannot blame these Montauk families for cashing in on the popularity of their town. “It’s nice to live somewhere that people are excited to visit. We’re lucky to live here year round,” said a fisherman and my bar-stool companion at one of Montauk’s favorite watering holes, The Dock. Others are frustrated with the infiltration of the regular Hamptons clientele to their small fishing town and are opening their own businesses to, as the hats made by Surf and Slide state, Make Montauk Less Great Again. Obviously, this is not to be taken literally and more as a suggestion to bring the old, barefoot-bathing-suit-no-heels uniform back to the place where the likes of Truman Capote received a DUI and of which Billy Joel croons in “The Downeaster Alexa.”

For those looking for the authentic Montauk experience (not experiment, all you Stranger Things fans), one that encompasses the town of my and so many others’ childhoods, that is scrappy and beautiful, here’s how to make it happen.

If you’re looking for true Montauk grit, look no further than the Memory Motel. It’s the site of many a post-prom party, but it’s most well known for the Rolling Stones song bearing the same name. It sits right on the main drag and you’ll be in walking distance to bars, restaurants and—what you really came for—the beach.

The Montauk Manor is a stately Tudor-style hotel built in 1927—so it’s anything but new-Montauk. For those looking to visit without having to rent a car, the hotel is a six-minute walk from the train station. It’s the exact opposite of the Memory Motel in that the guests have probably seen the Rolling Stones play the iconic song live, in their hey-day, rather than heard about it on Spotify.

Located on Fort Pond, Montauket is a bastion of older, simpler times. The hotel’s bar is a favorite of locals. It has everything you need; its deck is one of the best places in town to catch the sunset; it’s a place where you can eat, drink and enjoy live music, with a lakeside bed for you to crash on after a night of dancing to oldies.

There might be some bias here, as I spent many a summer week sleeping at the Atlantic Terrace, listening to the waves crash outside my window. If your Montauk excursion is a family affair, the hotel, which walks out onto the beach, is great for kids who cannot wait a moment after sunrise to get to the beach, without requiring parents to travel too far before coffee. Atlantic Terrace has long been a home to many Montauk vacationers, probably due to its quiet but central location.

The 415-acre state park found itself in the news once again for being the inspiration behind the Netflix original Stranger Things. But outside of the supernatural hearsay, this park is where to go for a scenic hike or bike ride. There’s also areas designated for fishing; weather permitted, you can do some cross-country skiing through the wooded park. Swimming isn’t permitted, but once you see the drop off the cliffs, you won’t be interested in a casual dip.

When Montaukers aren’t fishing, they’re surfing at Ditch Plains. Unlike the main beach that most of the town’s hotels walk out onto, Ditch Plains is separate from the noise of town. The waves don’t quite rival those of California and Hawaii, but if you’re a serious East Coast surfer (or just want to hang out with them), this is the place to hang.

If your hotel or Airbnb doesn’t face the ocean, Kirk Beach offers free parking and a beautiful stretch of beach for sunbathing and swimming. You cannot surf over in these parts but everything else is a go (well, not everything…). It’s a short walk into town in case you need to refuel. I can be found at Kirk Beach from sunrise through sunset, even on the cloudiest day. So wave if you see me there, glued to my blanket.

For history and seafaring buffs, the Montauk Lighthouse is a nice little walk through the town’s storied history. You’ll learn how the tip of the island was originally designed as a fishing town by disguise, to head off the navies of foreign countries. But don’t let me tell you, take a tour and hear it for yourself.

It won’t be a day in Montauk without a little bit of rain or, at the least, an overcast sky. This will give you the perfect excuse to tear yourself away from swimming and hiking to visit Whalebone Collective, the clothing, art and design shop that bears a magazine of the same name. Founded by Montauk-native Jesse Joeckel in 2010, the surfer and designer poured himself into the lifestyle brand that is an ode to one’s romance with Montauk. 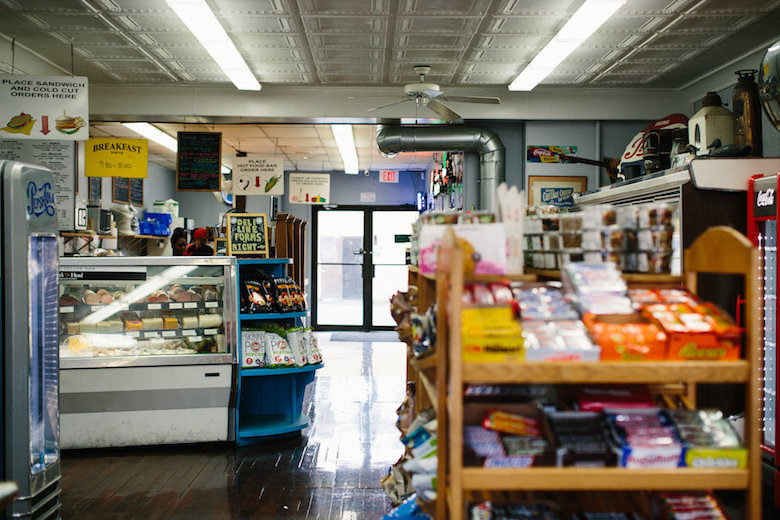 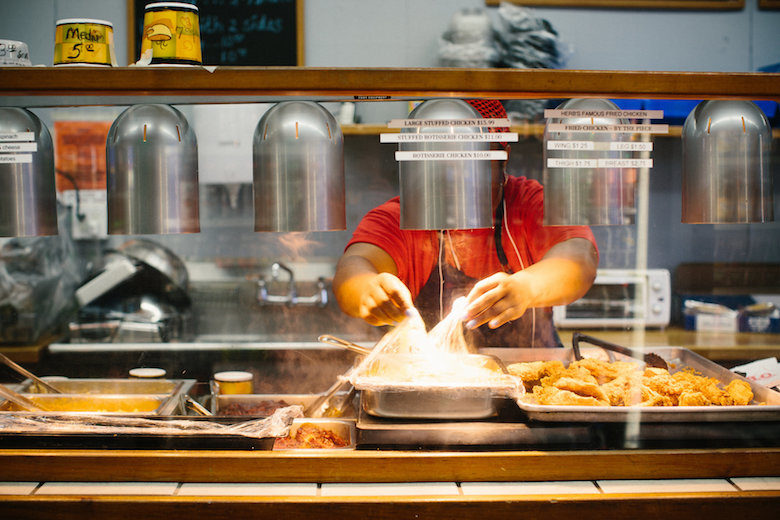 I’m always wary of recommending Herb’s because I don’t want them to run out of fried chicken before I get there. By the way, have you ever had fried chicken on the beach? No? Well, Herb’s, the local deli, will change your mind with its crisp-and-juicy chicken. If you’re not ready to go in head first, grab one of their gigantic sandwiches and a quart of Hampton Dairy Iced Tea, both of which you’ll be unlikely to share. 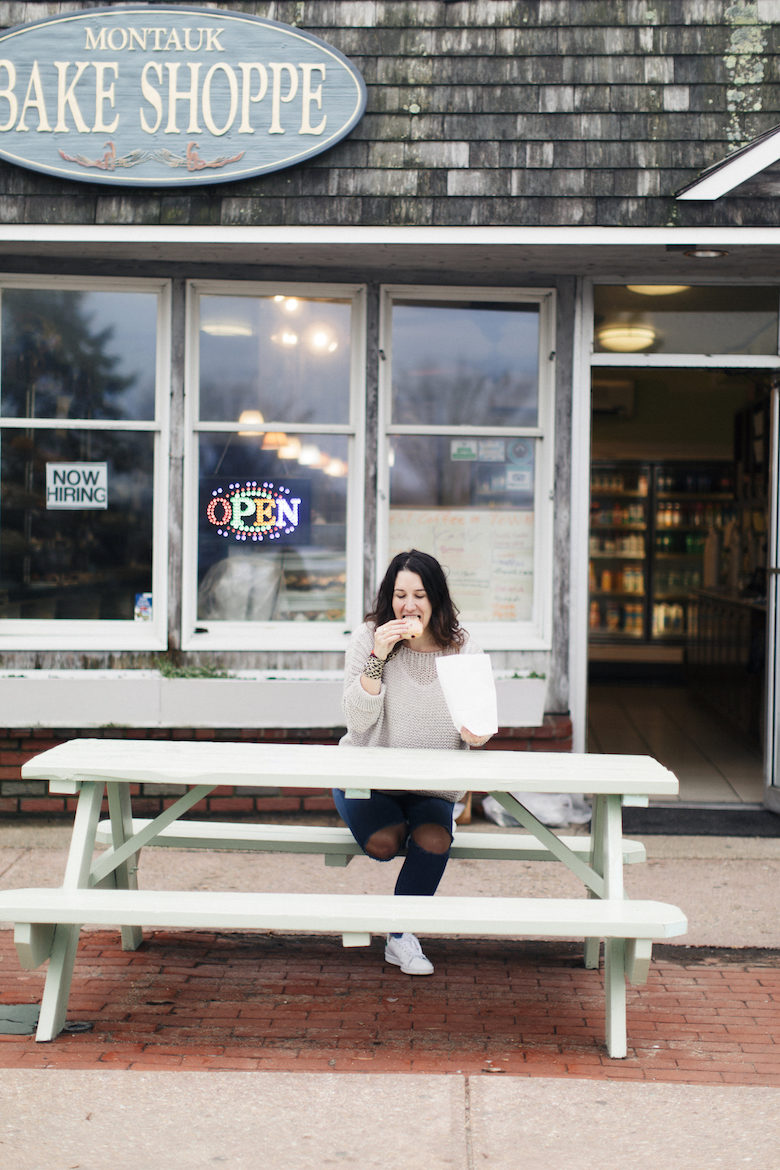 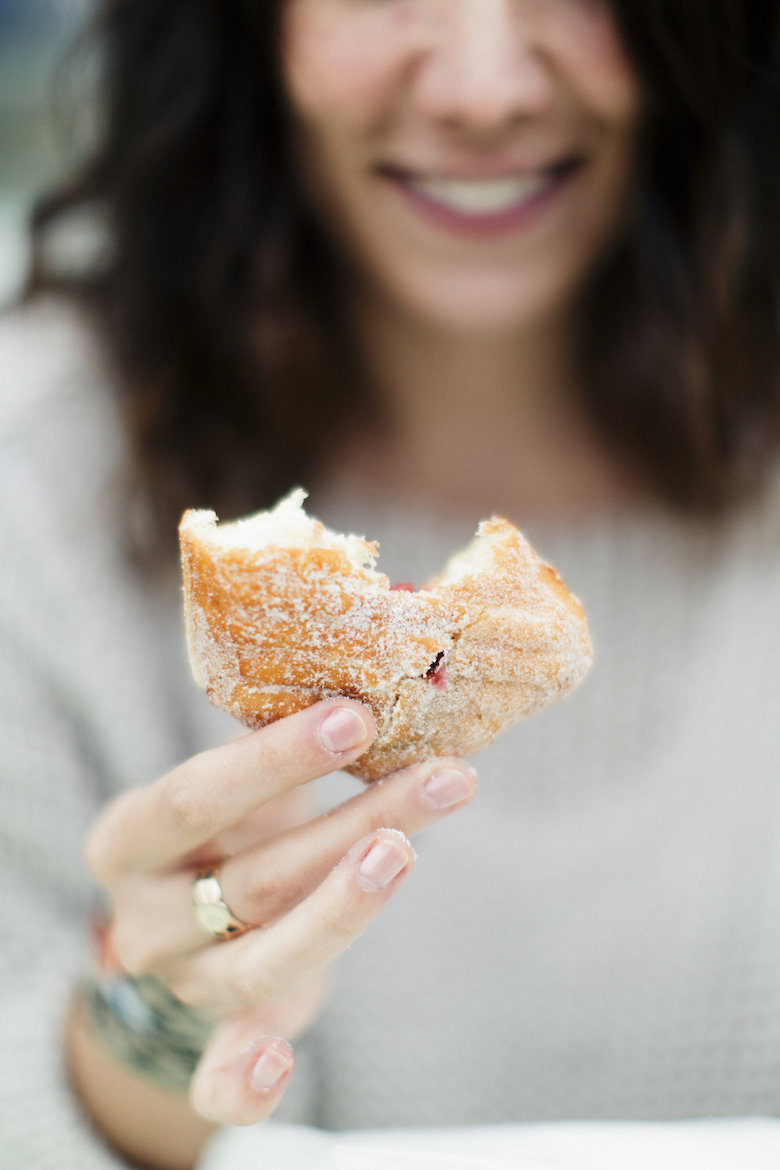 Get here early in the morning for a coffee and jelly doughnut. It’s no matter that you’ll be in a bathing suit for the rest of the day. These yeasty doughnuts, covered with the right amount of sugar and an even disbursement of jelly are worth a little extra belly bloat. But, they sell out fast so make this your first stop of the day. 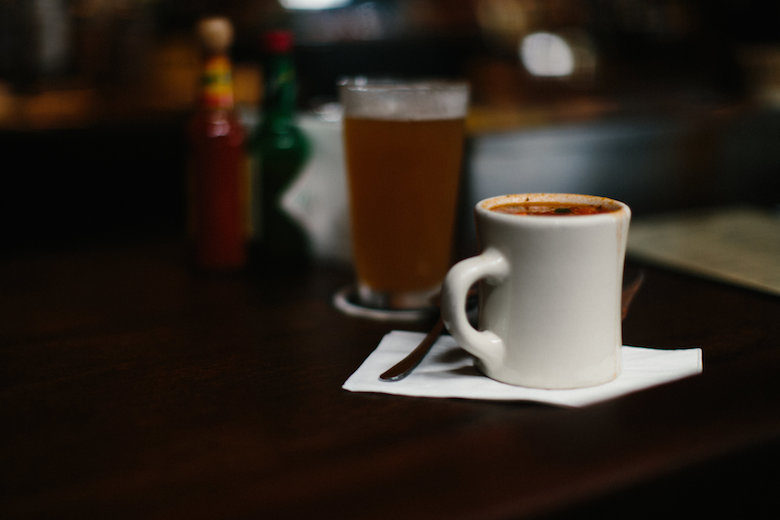 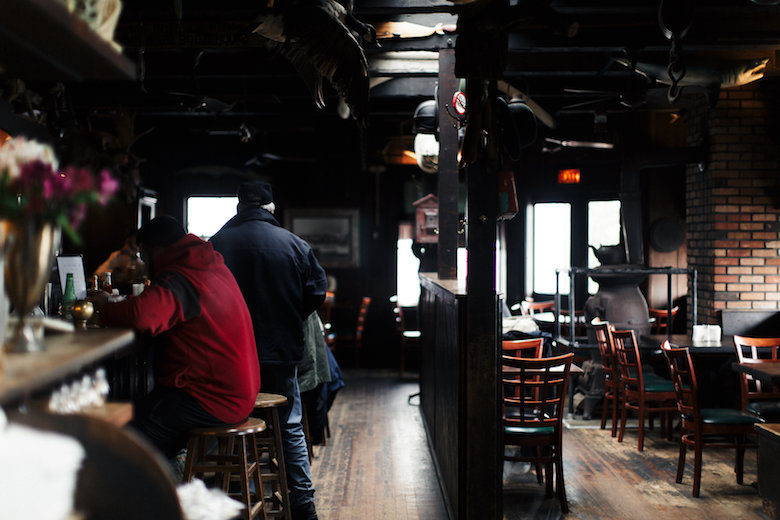 Walking up to the Dock, conveniently located next to all the fishing boats and adjacent to Gosman’s, you’ll likely see George, the owner, walking nearby or inside chatting up regulars—or in his case, friends. There is zero fanfare at the Dock, which is what makes it so special. It’s the place to go when you want to rid yourself of technology—no phones are allowed—sloppy drunks and children running amuck. Do yourself a favor and get a cold pint, plate of littlenecks and a fishwich, a fried, freshly caught fillet that someone in that very bar may have reeled in earlier that day.

Go hungry to Harvest or don’t go at all. The restaurant boasts a farm-to-table model, but what we’re most excited about is the family-style plates that could feed an army (aka: leftovers). Sitting on Fort Pond, an outdoor table is primed for sun-gazing as you slurp your linguine with clam sauce and bite into the crunchy, yet creamy goat cheese that’s paired with the portobello salad. Stick with wine and beer here, as the cocktails miss the mark and will fill you up before your meal. You’ll want to save all the room you can for the ice cream sandwich come dessert.

Because every New York town requires the perfect pizza joint. No matter the heat, the cheese and oregano-spiked sauce topping the crisp but airy dough will always hit the spot. If you find yourself walking through town like a true local—sans shoes—order from the pickup window and enjoy your slice(s) at one of the nearby picnic tables. Refuel post-surf or order a pie to go and enjoy it with beers at the nearby brewery. 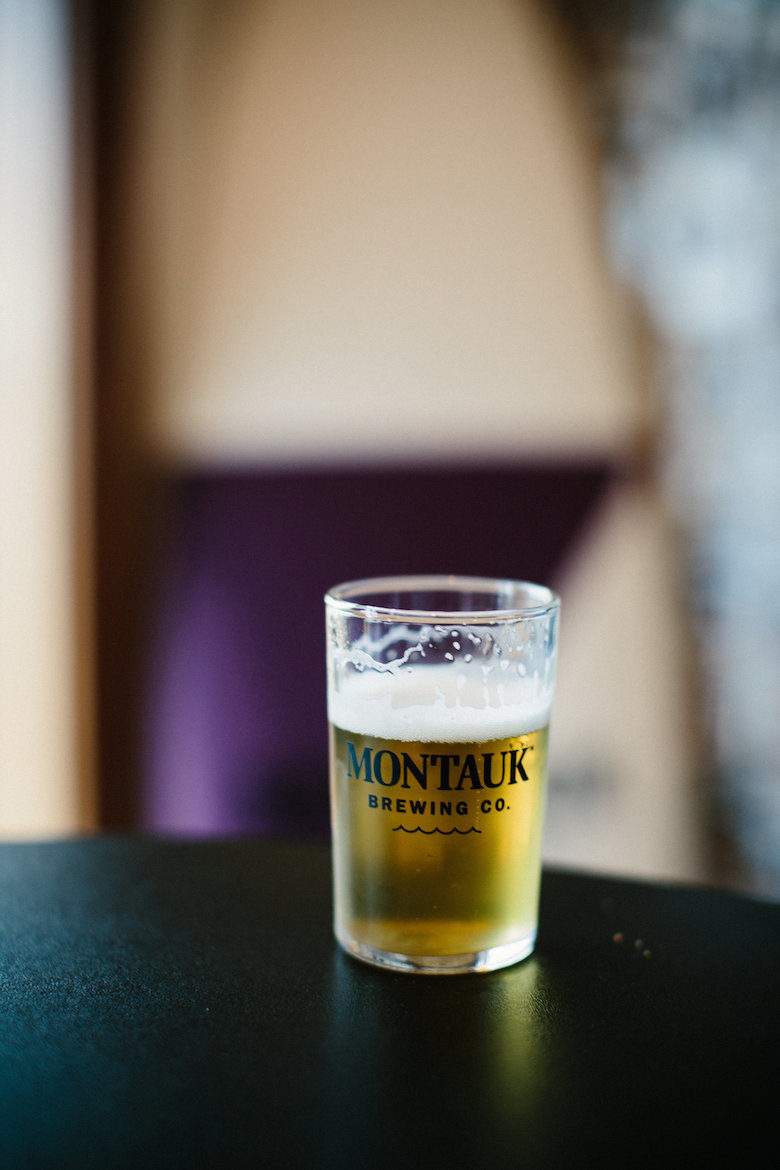 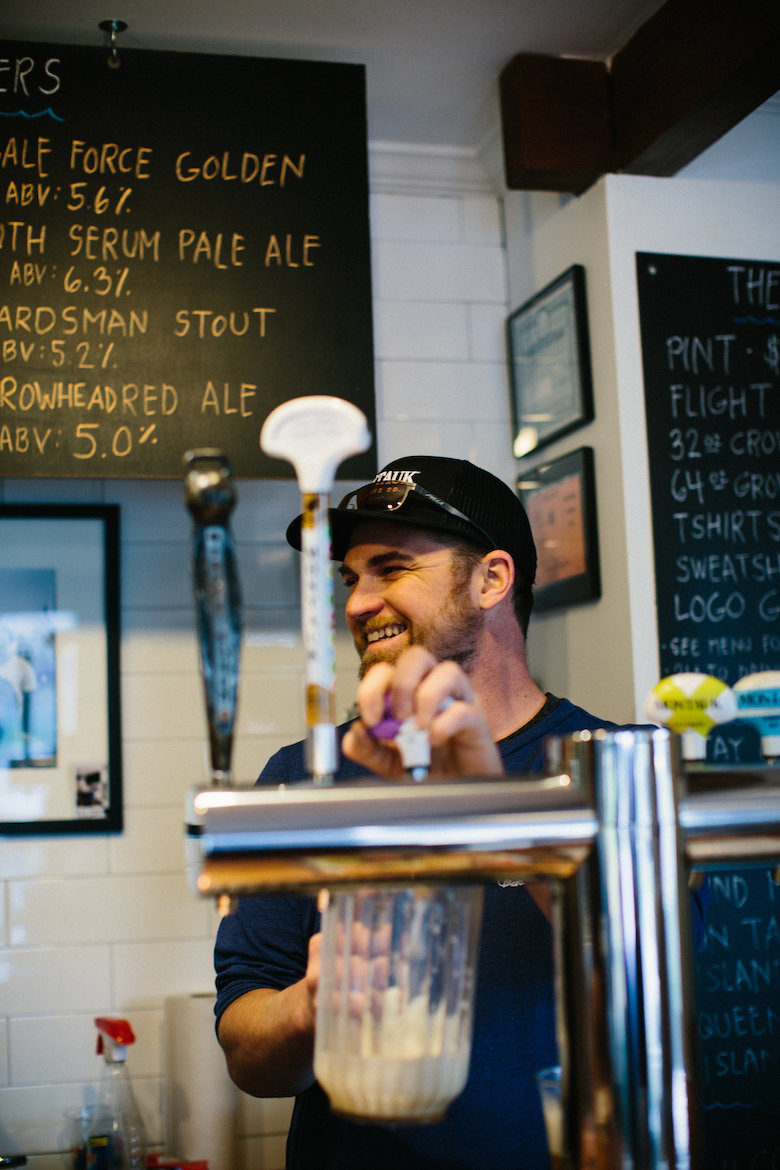 The Brewery, turning five this year, was founded by three of the town’s locals—Eric Moss, Vaughn Cutillo and Joe Sullivan—who returned home after college to give back to their surfing community. Now a popular destination for beer lovers and locals looking for a pint, the brewery, which is located mere steps from town, is distributing to bars in the five boroughs and throughout Long Island. The taproom rotates through classics like Driftwood and Summer Ale and features beers they’ve yet to can, like the Gale Force Golden Ale. If you’re sea-savvy, you’ll notice their beer cans depict nautical flags. “Come As You Are,” the brewery’s motto, can be applied to the entire town, accepting of whomever and whatever passes through.

This story was originally published in May 2017.