At South Fork Bakery, Delicious Has Never Felt So Good

This article appears in November/December 2017: Issue No. 21 of Edible Long Island.

South Fork Bakery employs young adults with special needs to make some of the island’s most special sweets.

The soft kneading of dough between fingers, the smell of ginger as it warms—baking stimulates all the senses. Shirley Ruch, a speech pathologist and learning specialist for more than 30 years, knows how the engagement of these senses can be a teaching tool. But it wasn’t until last year that she realized the fruits of their labor could turn into something more—and I don’t just mean delectable treats.

Around the roomy kitchen island at South Fork Bakery, young adults with special needs roll out gingerbread, oatmeal raisin and chocolate chunk cookie dough. They joke together, they bake together, and they learn about how to hold a job together.

“A big complaint of parents was the drop-off after high school,” explained Shirley Ruch, who started South Fork Bakery in 2016. “They wondered what their kid would do all day. They were petrified.”

Ruch knows that for many of her employees, this is their first shot at employment. They’re learning precious skills that they will be able to carry with them through their lives. Not just measuring out sugar and good handwashing technique, but also how to stay productive as an employee, and how to work together toward a common goal.

Frankie comes in and tells Shirley he’s finished with all the labels. What should he do now?

“This was a huge lesson for him,” she explains after she sends him down to the basement to empty the fridge. “It’s not just about the tasks, but about basic job skills, not sitting there when there’s nothing to do, and asking for help. So many of [my employees] are dependent on others doing things for them. I’m teaching them to be independent.”

This takes extreme preparation and organization.

“I quickly learned how to label and put things in places where they could find them,” Ruch said. “Once we all know where everything is, then I tell them they need to find it themselves.”

Ruch’s patience seems unwavering. Her background in special education and therapy infuses every interaction, but now she is an employer running a business.

“There’s a lot of hands-on instruction,” Ruch said, “a lot of modeling first and then putting the model next to them.”

She pays close attention to auditory directions, asking employees to repeat back to her what they’re going to do. She’s aware of tasks that might seem simple that are actually extremely challenging for her employees.

“There are a lot of motor skills involved,” said Ruch. “Peeling the ingredients labels, folding the bags. I help them when they need it. I want this to be a place where they feel success. So many places they don’t.”

Her eyes begin to swell, and she wipes back a tear.

The business is growing—last year they had twenty accounts and now they have almost forty. At farmers markets and in shops, South Fork Bakery is gaining a reputation for delicious baked goods. And Ruch wants this growth to continue. But with 15 employees between the ages of 20 and 35, all with special needs, there’s a lot of management. Asked whether she would hire a few other people who might be able to increase productivity, Ruch declined.

“We might have volunteers come in to work alongside our employees, but the major goal here is to help our employees feel successful in what they do,” said Ruch. “To have someone come in and bang out a bunch next to them would be detrimental to that.” 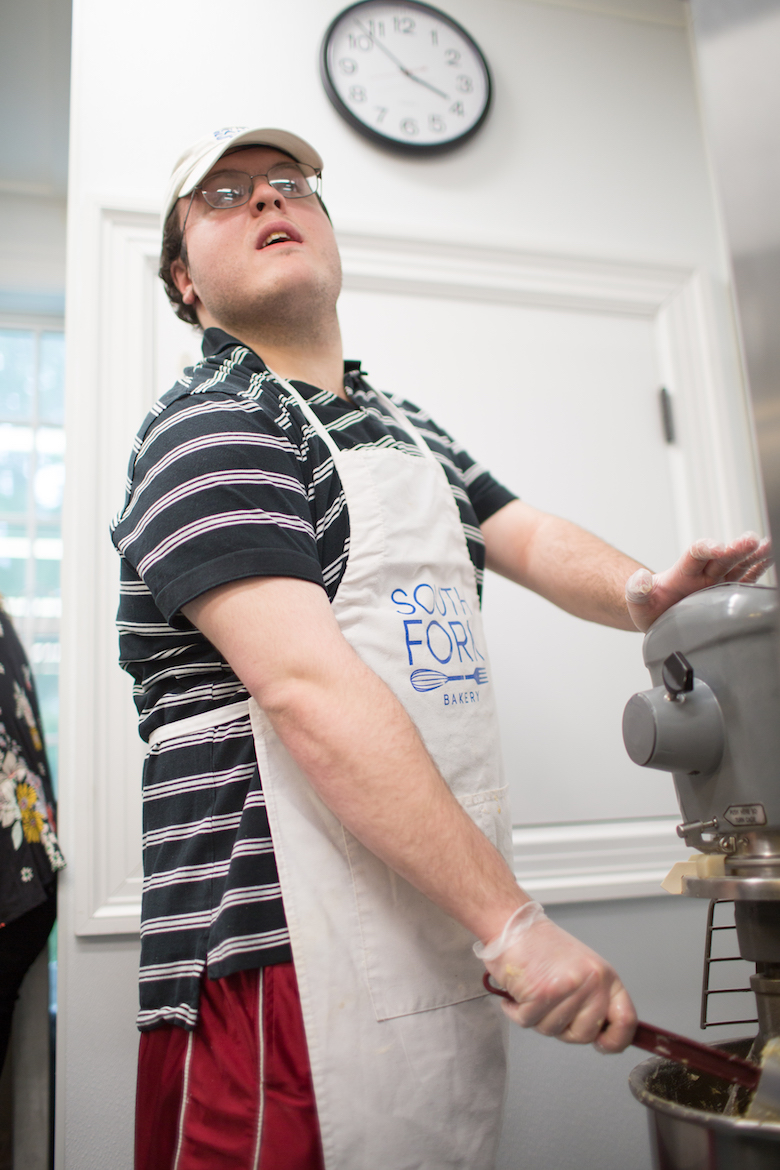 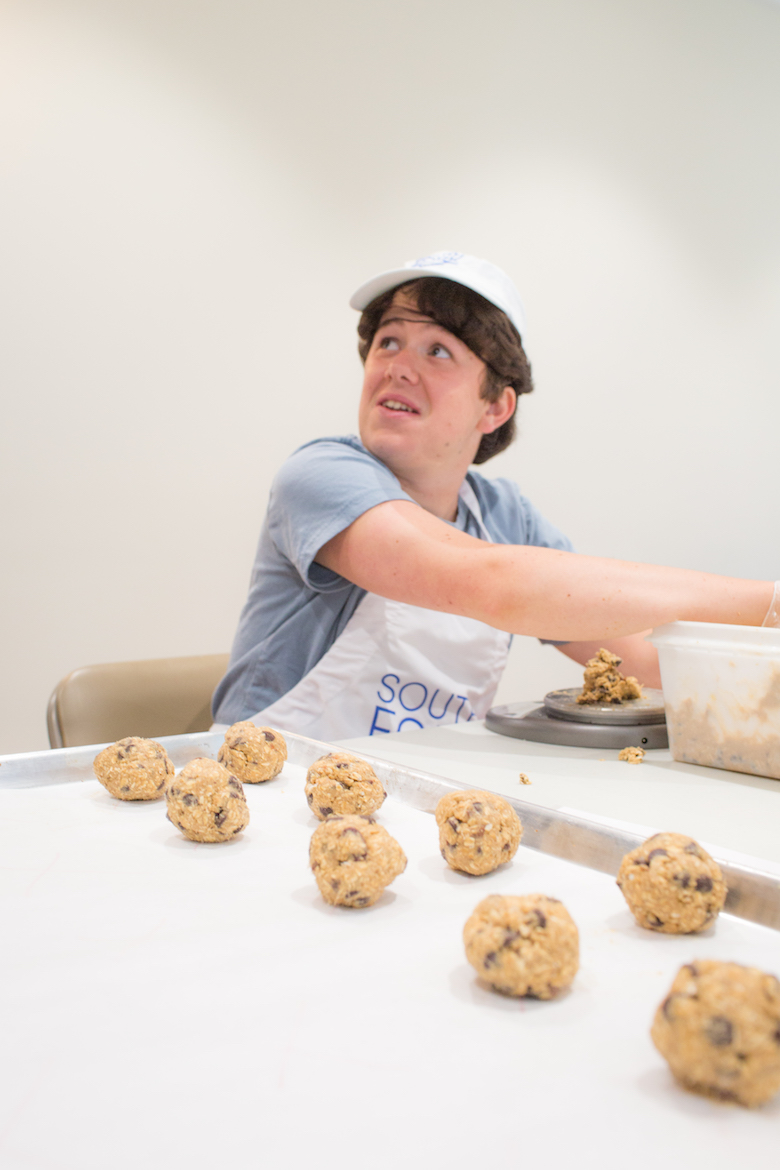 She’s also found that some of the most educational experiences have been in the mistakes. One employee recently confused ginger and nutmeg in a recipe, and was just about to melt down, saying things like, “I need a better brain”.

“I said, ‘Let’s bake them and see what they taste like’,” said Ruch. “They were actually really good. It could have been a moment of despair, but he came out beaming. That was a big breakthrough.”

Frankie Demarteleire and Geoffrey Brodrick have been applying little round stickers to the bottom of each package, indicating the date when the cookies were baked. I sit with them around a table and they tell me about their experience.

“I usually work on ginger snaps,” says Demarteleire proudly. “We get out the dough, roll it into balls, we measure the weight of the balls. We put a little bit of sugar on it and place it on our tray.”

Frankie works at many of the farmers’ markets across the East End, and he’s discovered a knack as a salesman. 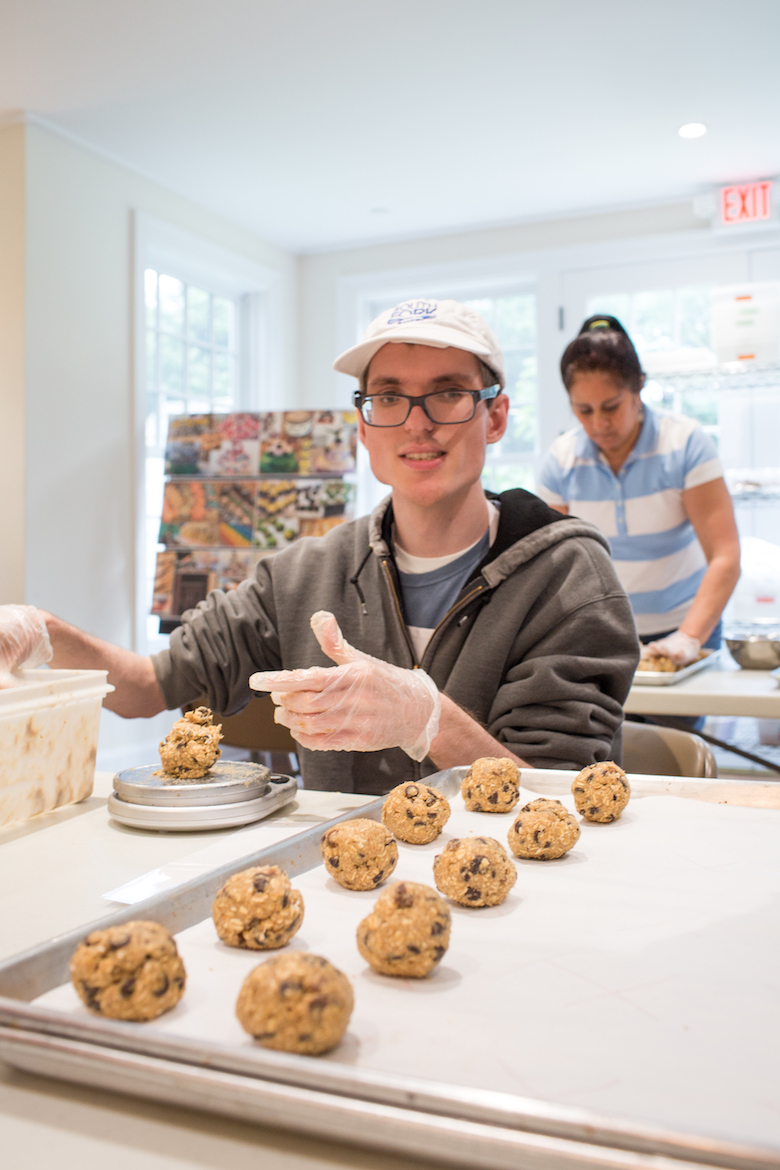 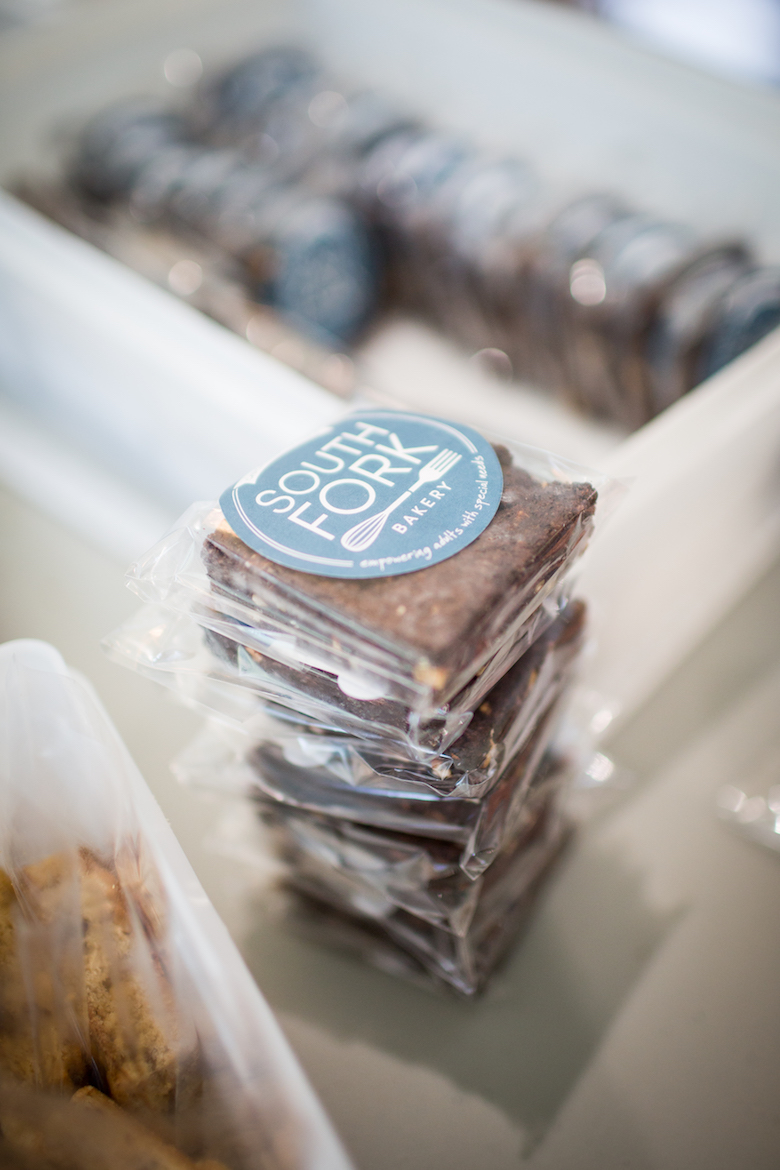 “I like talking to people,” he said. “That’s not something I ever did before.”

Geoffrey has worked a few other jobs, but often found he had trouble keeping them.

“There have been a lot of jobs I didn’t feel capable of doing because of physical difficulties or whatever,” he said. “I feel up to this, and I want to stick with it because I think it’s something that I need.”

To make the long term vision of continuing to empower adults with special needs sustainable in the long run, South Fork Bakery needs to become a non-profit.

“It’s hard enough to make a living if you’re a baker or a chef, let alone a baking facility that employs special needs employees,” said Ruch. “But this has been so well received that it’s been encouraging. More than employment, this is about creating a community.”

For many of these families, there’s a feeling of isolation, and South Fork Bakery works to bring them out of that. Shirley hosts several dinners and barbecues with all her employees and their families so they can connect with one another. Employees bring home baked goods to share with their extended families, and they connect with the community at the farmers’ markets.

I ask Frankie and Geoffrey if there’s anything else they want to share about their experience working at South Fork Bakery. Frankie leans in.