Cocktails on the Half Shell: Where to Sip and Slurp Your Way Through the Summer

This article appears in August/September 2017: Issue No. 19 of Edible Long Island.

How did we ever live without our local cocktail-conscious oyster bars? 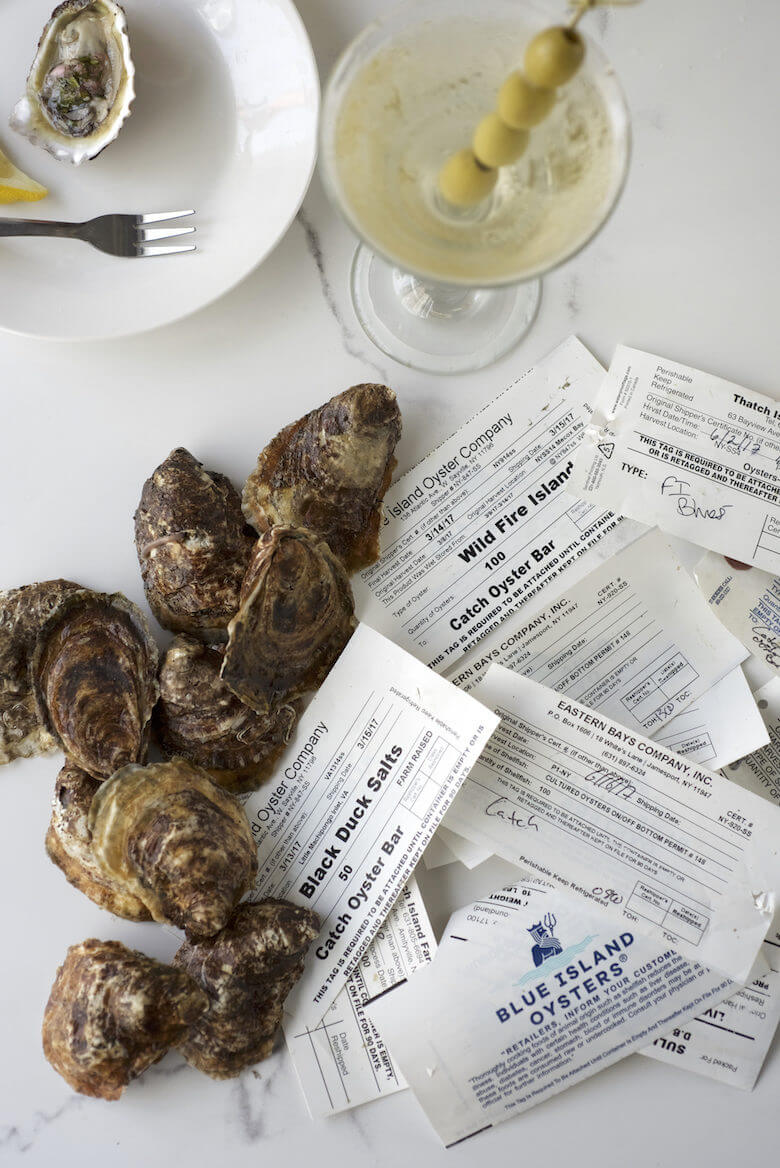 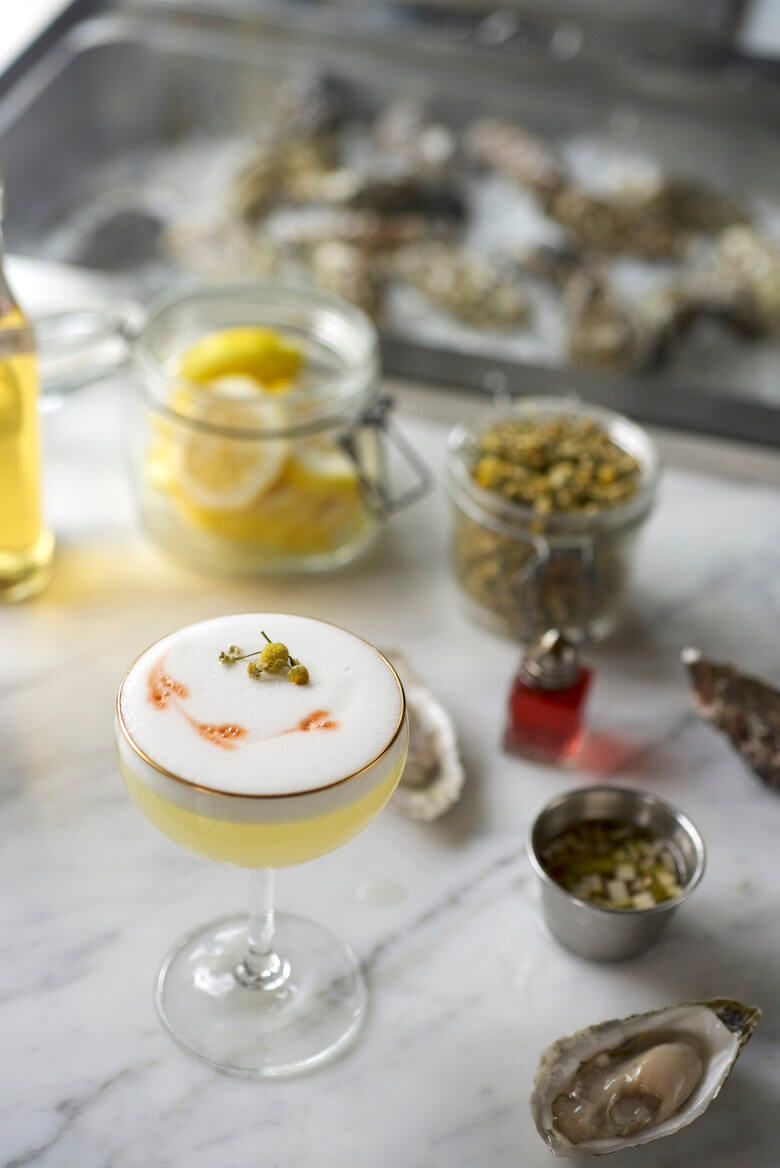 There seems to be something in the air in towns sitting on the Great South Bay. On the South Shore, two oyster bars have popped up to make us wonder how we ever lived without them. They’re sleekly designed modern spaces offering varieties from across the country in parallel with bar programs that exceed expectations. In Patchogue and Bay Shore, both Catch Oyster Bar and Salt & Barrel are becoming known for serving up everyone’s favorite bivalve alongside a solid cocktail.

Mike Avino opened Catch Oyster Bar in Patchogue just this year, right off of Main Street on North Ocean Avenue. The tiny, 30-seat restaurant has the clean, nautically inspired blue and white decor you’d expect for a seafood-focused spot in a bay-side village, along with an open kitchen. This is Avino’s first restaurant, but his family has been serving locals for years; he grew up cooking at the Bellport Chowder House, which closed about 10 years ago, and they also own Avino’s Italian Table in the same town.

Catch is exactly what he wanted to open up after he returned to restaurants following a decade in media: Something manageable, where he can control the quality of the seafood and the drinks, and not get so overwhelmed that he can’t connect with customers who are sitting at the bar. It doesn’t hurt, of course, that Patchogue was desperate for a raw bar to go along with all the richer options. While the town has been, as Avino notes, “so booming and successful,” the lack of fresh seafood was glaring.

The oysters themselves are often coming directly from the people doing the diving, like Thatch Island Oysters and East Bay Oyster Company. “I know the farmers there and most of the guys who are doing the harvesting,” he says. “A friend of mine who I have working as a schucker on the weekends has his own oyster farm. A lot of the time he’ll harvest three or four days a week, and before he brings them to the distributor, he’ll bring me whatever I ask for—a couple hundred here or there.” That’s the house oyster, the Catch 63. If you order it, chances are good it was in the water that morning. 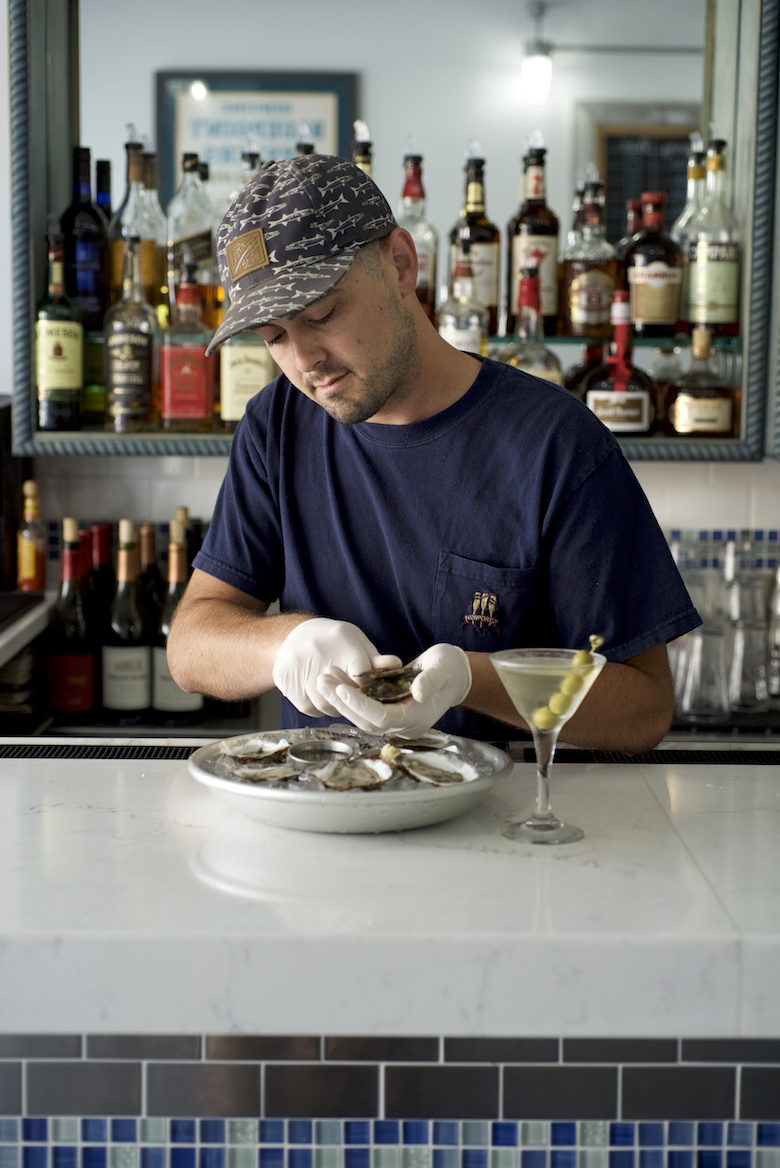 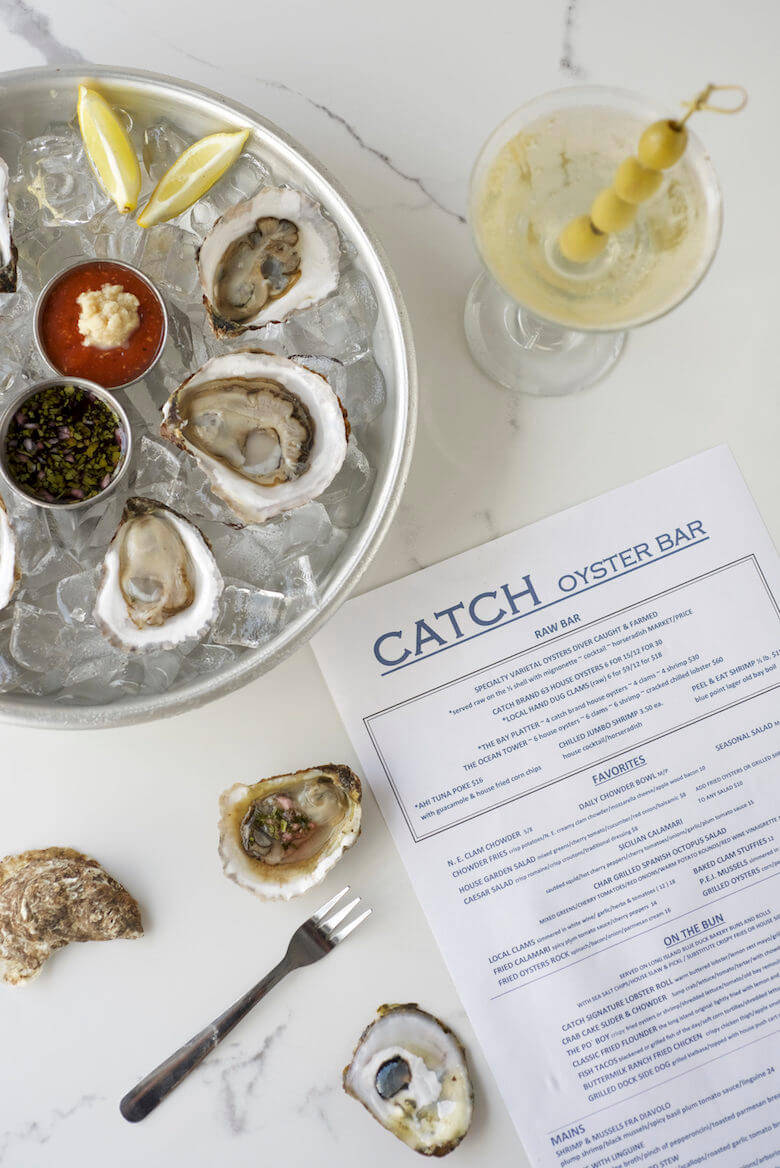 He developed the menu with his father, and it also includes items like spicy fried calamari, an oyster po’boy on local Blue Duck Bakery rolls and salads, and all of it goes perfectly with a dirty gin martini. The town has always been a good place for a beer, but cocktails are starting to emerge—here, as well as at the nearby Rhum and Flight. Along with brews like the Great South Bay Sea Salt Ale and Coney Island (which were made to be enjoyed along a sea breeze), ordering a classic cocktail to go with your oysters won’t leave you disappointed. Though Long Island was once all about vodka, the bartenders here can stir you a Manhattan.

The same can be said of Bay Shore’s Salt & Barrel, another oyster-focused spot opened by Morgan Flynn, whose family is also in the business, with partners Ryan Flynn and Danielle Grosseto. After moving back to the island following a stint in Brooklyn, he noticed a lack of oyster bars, despite how popular a $1 oyster happy hour is in the boroughs. Flynn has focused on bringing in a wide array of varieties from around the country for the hardcore slurpers. “We want a diversity of oysters,” he says. “It’s important for people who come in and really want an oyster experience to get a Massachusetts, Virginia, North Carolina or Prince Edward Island and then go over to the West Coast.” 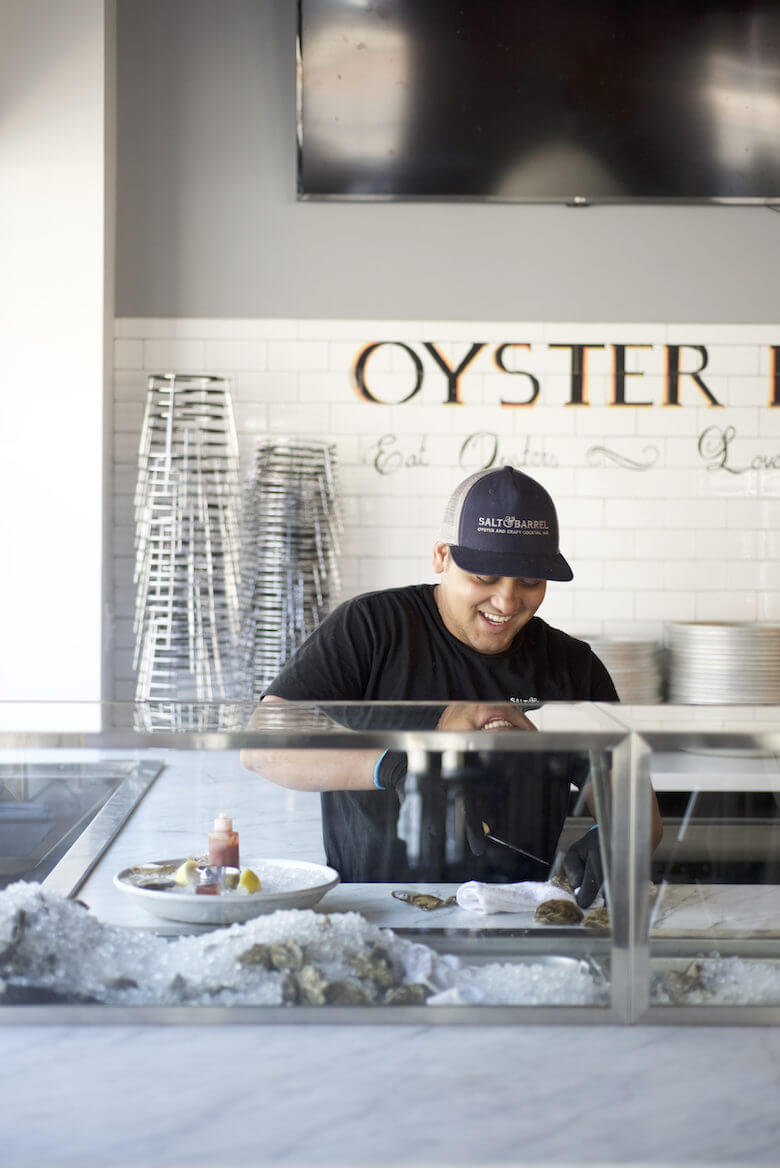 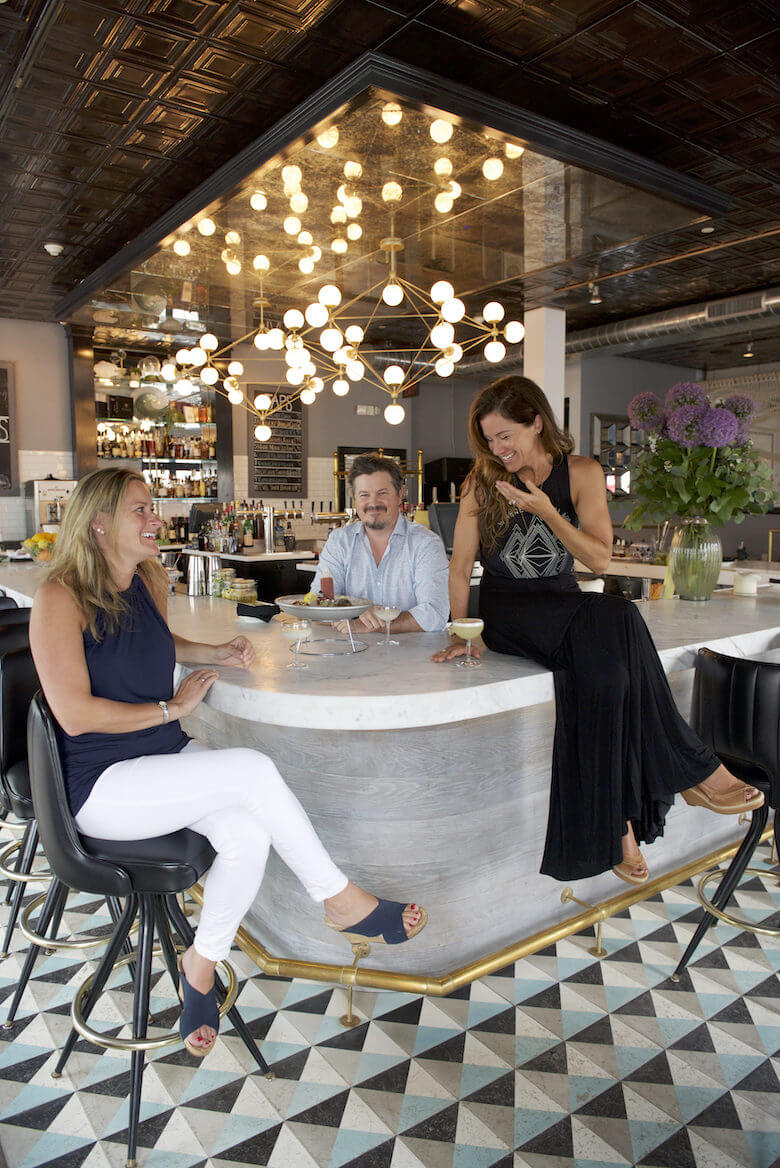 When it comes to the bar menu, he’s trying to offer cocktails for the similarly ambitious: Their most popular drink is their take on the Hemingway Daiquiri. “I find that the demographic of people out here is really into learning about classic cocktails,” he explains, because the bar scene still needs to catch up to that of the city in terms of ambition. That daiquiri has a citrusy acidity that complements the oysters perfectly. “People really seem to enjoy those two together,” Flynn says. For those who haven’t quite let go of vodka yet, there’s the Laundress Sour with vodka, elderflower liqueur, fresh lemon juice, egg white and simple syrup. “You shake those and get a beautiful head to it,” he explains. Again, the acidity makes it perfect for slurping; Flynn compares it to the pairing of a Sancerre or sauvignon blanc.

But now you know that you don’t have to reach for the wine list when you’re looking for the right pairing. The next time you’re craving a good cocktail and oysters on ice after work, you know where to go: Head south to either Patchogue or Bay Shore, and you’ll find calm on the half shell as well as in your glass.