This article appears in November/December 2016: Issue No. 16 of Edible Long Island.

Some might look to the leaves for signs of fall. But for many, the true harbinger of autumn on Long Island is when the cars queue up at the historic Jericho Cider Mill on Route 106. 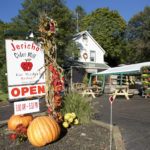 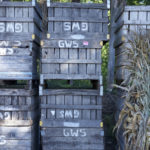 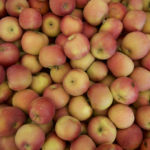 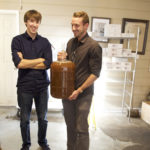 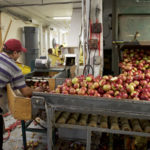 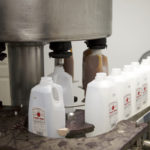 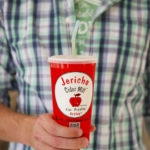 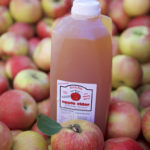 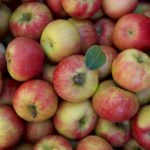 If the perennial pumpkin pie feels like a holiday cliché, consider a visit to the historic Jericho Cider Mill, abounding with apples aplenty since 1820. From cider donuts to apple crumb pie, to the mill’s famous fresh pressed apple cider, you’ll find a bounty of pomme-inspired treats to dress up any celebratory meal.

While some might look to russet leaves for signs of fall, the true harbinger of Long Island autumn is when cars queue up on Route 106 alongside the mill, filled with folks in search of holiday provisions. Walking up the slight incline to the two-story, white clapboard barn, customers encounter a whimsical road sign. It depicts a slightly madcap apple “happy face,” encouraging all to “Live HappLey Appley” – sweet advice in these challenging times.

Visitors weave between large wooden crates stocked with mountains of New York State Honey Crisp, Gala and Macintosh apples. Just beyond, enter the rustic shop where refrigerators are stocked with jugs of fresh cider, pie boxes are stacked high, and glossy red candy apples line the counter. There’s even a selection of jams, pickles and a spirited Moonshine Jelly.

The late George Zulkofske – the legendary owner – was a fixture at the mill for decades.

Zulkofske’s family purchased the cider mill in 1938 and he took over as owner and operator in 1970. During the course of his life, he became an elder statesman and advocate for the simplicity of freshly pressed apple cider, which he described as “old-fashioned, good food” without additives.

“In the supermarket you don’t know what you’re really getting,” Zulkofske told me. “You have got to read the fine print.” Then, Apple George smiled slyly and added, “There’s no fine print here.”

The current mill structure dates to 1920. Zulkofske said his family was able to find evidence of apple cider production on several properties in the area going back to the early 1800s. One of the former mills produced sparkling apple wine, but that business ceased to operate around prohibition.

Now open year-round, the Jericho Cider Mill continues to draw crowds with their signature cider product that is local and tastes freshly picked. The only ingredient is “fresh apple juice.” The mill presses more than 40,000 gallons of cider annually.

“You can’t get what we sell anywhere,” Zulkofske told me. “We use only New York state apples and it’s strictly what comes out of the apple at squeezing time.”

The business uses a German-built wine press purchased by Zulkofske. He said the flavor of the cider changes throughout the season, depending on the apple crop and the time of year.

“In the first week or two, it’s a little on the tart side,” he explained. “The apples are very early apples and they’re not sweetened up a lot. Come around Thanksgiving, it’s just loaded with sugar.”

A bevy of apple pie varieties, crisps, cookies, breads and cider donuts are a seasonal favorite. Apple George is credited with asking his mother back in 1968 to make a couple of her holiday pie recipes to sell at the mill. Mama’s pies were a sensation, and the mill continues to bake with family recipes today. Look for an eclectic, mouthwatering menu of fruit “pairings” including Apple Cranberry, Apple Raspberry, Apple Blueberry and Apple Peach.

“An apple a day” has always been considered sound advice, and if you get your serving through pie or cider made from scratch at the Jericho Cider Mill, the added dash of history and local flavor tastes even sweeter.