The Long Island Fair will return for its 174th year this September and October. Here, we take a look at its history—and future. 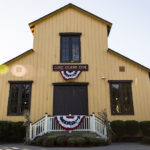 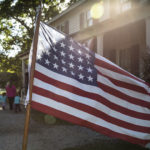 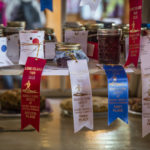 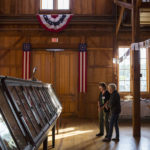 As crowds of people browse the airy exhibition hall admiring display cases of elaborately decorated cakes, knobbly oatmeal cookies, mini-loaves of rich banana breads, sweetly topped cupcakes and looking to see who won the blue ribbon, pushing strollers, collecting grandparents, saying “Hey, I could make that” you might not notice a small 83-year-old woman smiling sweetly in a straw hat and a 19th century dress that she made herself from an authentic pattern.

Then again, she might just walk up and say hello. This little lady is Eleanor Aldridge and for 35 years she has been volunteering at the Long Island Fair. For the last 30, she has been superintendent of the Culinary division, getting together the team that receives, catalogues, judges and displays the wares that Long Islanders have been submitting to competition since the first fair took place in 1842. At this 174th rendition of the fair, one of the oldest in the country, she will be there all six days, keeping an eye on things, making sure there are volunteers around, but mostly enjoying the social interaction that swirls around the exhibition hall.

It wasn’t always this comfortable.

Beth Chamberlin has been a volunteer at Old Bethpage Village Restoration for over 15 years.

“Before they built the exhibition hall, they had everything under big tents,” Eleanor recalls, in a lovely modulated voice that recalls the Nick and Nora Charles age of film. “The first rainy day everything would blow around.”

The Long Island Fair has had many iterations over the 174 years of its history. The first Long Island Fair – then called the Queens County Fair – was held in 1842, a year after the founding of the Agricultural Society of Queens, Nassau, and Suffolk Counties that continues to sponsor it today.

“In its first years it was held in vacant lots or on different farmers’ land,” says Gary Haglich, who first started working with the fair in 1974 at the height of the Bicentennial celebrations and who is now Fair Manager. “In 1866 they established permanent fairgrounds in Mineola on the site of what is now the county courthouse on Old Country Road. The Exhibition Hall was called Floral Hall back then.”

Haglich, who got his start with the Fair as the village carpenter at Old Bethpage Village Restoration, shows me pictures of the original fairgrounds with its racetrack for harness-racing and a very familiar-looking cruciform building with a big central tower and a distinctive weather vane. Population grew and Nassau became a county in 1899 spurring a name change: The Mineola Fair. The Fair moved to Roosevelt Raceway in 1953 and was called The Mineola Fair & Industrial Exposition. It was around this time that one Eleanor Aldridge first went to the Fair on a high school trip.

The Fair moved to its present location at Old Bethpage Village Restoration in 1970, and Aldridge was an active participant, at first submitting dried flower pictures, cookies and clothespin dolls for judging. “When they had the tents they had the exhibits behind ropes,” she recalls. “I realized that if I volunteered I could get behind the ropes and get right to the tables to really see the exhibits. So I started volunteering.”

So did her best friend and her sister.

After five years with the hobbies, there was an opening for superintendent in the Culinary division and she’s been taking charge there ever since.

Craft and culinary accomplishments collide at the Long Island Fair

Things got a lot more comfortable in 1995. That cruciform building in the 1866 pictures and drawings looked so familiar to me because it was the model for a reproduction on the grounds of Old Bethpage Village Restoration that finally gave the Long Island Fair a home worthy of its long history.
Today the Fair has between from 20-25 thousand visitors over the course of two fall weekends. My family is always among them, checking out whether we won anything (my son has a couple of blue ribbons and I have some second-place finishes), enjoying the old-timey jugglers and music shows, admiring the spectacular gravity-defying dahlias and indulging in candy apples. One year I will win the handmade quilt, but in the meantime we admire the handiwork.

Eleanor Aldridge explains to me the process of the competitive exhibits.

“We have seven judges, some I inherited — the jelly woman has been here almost as long as I’ve been here — some were referrals and some are chefs we found. There’s one for each category, except for the cake and bread; we get so many we need two,” she says. “They are all different. The fudge lady has a very specific chart she uses for judging. Now that they include maple and apiary in culinary I was talking to the judge, but half of what he said about it went right over my head! It is a different world from judging baked goods.

“Each judge does one category at a time and it all has to get done before the fair opens,” Aldridge continues. “We set each submission in front of the judge and they look and taste one at a time and then sometimes they go back and forth between some. They taste everything unless it is in objectionable condition; anything in poor condition or obviously not fresh goes out. Then they decide first, second and third.

“We start at 10 a.m. and are usually done by 2 or 3 p.m. with a break for lunch. After that we might sample, but then it all goes out into the display cases. Many of the cases are original and some are very good reproductions.”

Aldridge says that while other categories in the Fair have decreased in participation over the last few years, the culinary division is still going strong.

“We do try to keep up by adding new categories,” she says. “Cupcakes are new, fudge is new. We have cut down on the pickle categories, because most people make either sweet or dill and that’s that. We’ve added pies; isn’t that funny that we didn’t have them until recently? And now there is an advanced category for professionals. Entering in the culinary category is free, but for the advanced you pay $5. And the prizes are a little better.”

Prizes in regular divisions are from $1-$3, but in advanced they go up to $150 for a first place finish.

Eleanor Aldridge believes that more than a relic from the past, the Long Island Fair has an important part to play in our society today.

“It isn’t only so that children can see how things were done in the past,” she says. “It is good for the kids to see other things you can do besides playing on the iPad or whatever those other electronic things are called. They can see entertainment and recreation that is not electronic. And people seem to enjoy it, because they come back year after year.”

So if you have not yet shared our county fair tradition, we hope that you will start now. Once you attend, you will very be likely to – like us and so many others – say, “Hey, I could do that!” and start submitting to the competitive exhibits. Perhaps, like Eleanor Aldridge, you will be moved to volunteer. And while you are there, you should ask her about it. She’d love to say hello. This 83-year-old mother of five boys who only just retired two years ago plans to be there every day of the Fair from 8 a.m. to 7 p.m., although she says with a laugh, “I hope I can stay awake that long!”

The 174th Long Island Fair will be held September 24-25 and September 30-October 2 at the fairground of the Old Bethpage Village Restoration.