At Montauk’s Gulf Coast Kitchen, a taste of the Gulf Coast—and beyond—at the easternmost tip of Long Island. 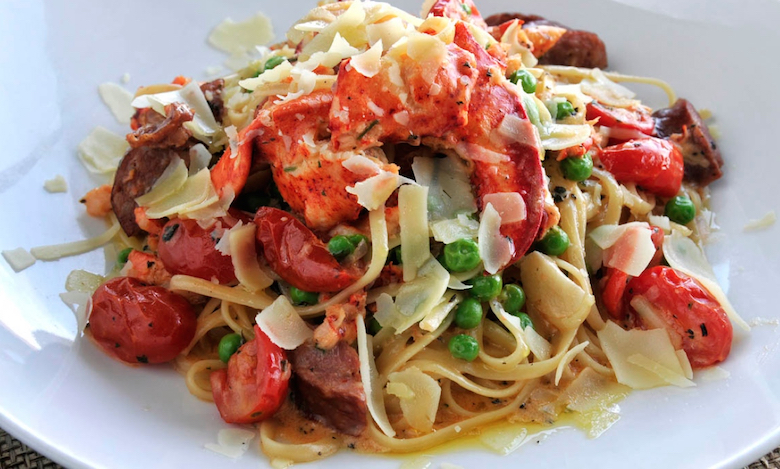 The Hamptons has some competition in the food world. Montauk is quickly proving to be the next culinary hot spot on the East End.

Gulf Coast Kitchen at the Montauk Yacht Club, is under the guidance of Executive Chef Paul O’Shea, who has brought his world travels and flavors to one of Long Island’s favorite resort towns.

Chef Paul O’Shea was born and raised in Dublin, Ireland where he attended both college and culinary school. From there, he worked in restaurants in Wales and London. His inspiration to cook came from his family’s extensive travels.

“As a kid my parents were always traveling through West Africa…Spain,” said O’Shea. “Growing up I was one of five kids. We traveled all around and we saw all that variety [of food], and we became more aware of what’s out there, and the different cultures and flavors. West Africa has a strong Indian population, so I incorporate curry in some of my dishes, along with Chinese, and Mediterranean flavors.”

O’Shea has also been inspired by the restaurants he has worked in. Odins in London was very international, and food like wild game and seafood was flown in from all around the world. Around thirty years ago he left Odins and came to the United States to work for his uncle in Massachusetts who owned a restaurant in North Boston. After two or three years working there, O’Shea started traveling around the United States. He worked as a private chef in Beverly Hills for the Prince of Saudi Arabia, he worked at a Norwegian restaurant on the Hollywood strip, and then he went on to manage and cook in hotel restaurants near UCLA where he gained even more experience.

To see where else Kerriann Eats, click the logo!

After that, O’Shea worked in executive chef positions at MGM Mirage Resorts and Caesars in Las Vegas, the Hawks Cay Resort and Marina in the Florida Keys, and Embassy Suites Hotel and Convention Center in Tennessee. He came to the Montauk Yacht Club in January 2016.

“I thought it was a perfect fit,” stated O’Shea. “I feel very comfortable here. I get to play with food and all the local items from the community.”

O’Shea describes his food as fresh and local, while combining international flavors with American and European techniques. On the local level, he uses goat cheese from Catapano Dairy Farm in Peconic, amaranth cress and other micro greens from Koppert Cress in Cutchogue, and a delicious phillony bread and wine bread from Orwasher’s Bakery in New York City. Orwasher’s has teamed up with Channing Daughter’s Winery in Bridgehampton to create an artisan bread using their chardonnay grapes in the starter. O’Shea pairs these breads with homemade butters and his own infused salts. His most popular salt is infused with Sriracha. An extensive wine selection features local wines as well.

Chef O’Shea started me off with the warm, crusty phillony bread which was wonderful with the infused salt. A rich lobster bisque made from homemade stock was topped with a Pernod crème fraiche and was absolutely divine. This was definitely my favorite dish. Next came the restaurant’s most popular dish, a lump crabcake with fig and Sriracha aioli, topped with homemade jalapeno ice cream. There was definitely a play on flavors and textures here, which worked remarkably well. O’Shea calls it “fire and ice” for the hot and cold. It came beautifully presented on the plate.

For the adventurous, another beautiful looking dish was the chili pulpo. Chef O’Shea poaches the octopus in red wine and a seasoning packet of bay leaves, mustard seeds, fresh thyme and garlic. After about an hour and a half, he cleans it, then grills it with a fresh chili glaze. It is served with papaya salsa, plantain and a Kalamata olive aioli.

I really liked the pesto gnocchi which is house-made and tossed with garden pesto cream, roasted peppers, parmesan and pancetta, as well as the mini lobster rolls topped with caviar. The organic roasted beet salad with Chioggia and yellow beets, Brussel sprouts, goat cheese and aged balsamic, was delicious and fresh.

If you like fish, the Asian inspired Seasonal Yacht Club Catch is a restaurant favorite. All of the fish served at the restaurant comes in daily from Gosman’s Dock. So whatever fish arrives at the restaurant, Chef O’Shea will use it. To prepare, the fish is seasoned and lightly charred, and is served with pineapple ginger curry over leafy greens and soba noodles. The night I was there the fish of the evening was Ahi tuna. Although the tuna was cooked more than I would have liked, the flavors of the noodles were delicious. I also tried herbed seared tilefish pomodoro which had flavors from Italy, and was served over risotto with a garlic tomato basil sauce.

If surf and turf is what you’re after, try the hanger steak and herb shrimp made with a cabernet demi, and served with cheddar mashed potatoes and grilled asparagus. The meat in this dish was tender and flavorful.

The desserts are large and should definitely be shared. I tried the strawberry napoleon which was served with a mango sorbet, a rocky road chocolate mousse “schmear” with peanuts, candied apricots, marshmallow and frozen chocolate dipped raspberries. The mousse was creamy and rich and would have stood well on its own without the rest of the accoutrements. For chocolate lovers, the dark chocolate hazelnut tart with Chantilly cream and raspberry sorbet will be sure to please.

Along with the restaurant, Chef O’Shea manages catering and banquets for the Montauk Yacht Club. The restaurant will be going through extensive renovations beginning September 20 until mid-April. Come the spring there will be one main restaurant, one casual restaurant and bar, as well as food trucks, all of which O’Shea will be managing.

As for Chef O’Shea, when asked what he likes best about being a chef he replied, “I would have to say it’s the daily challenge, the opportunity to constantly adapt and change and try new things. It’s really a passion. I love what I do every day. It doesn’t get better than that.”

Coast Kitchen at the Montauk Yacht Club is open seven days a week for breakfast, lunch and dinner, and for brunch on Saturday and Sundays.