The latest in Mexican is in Garden City and your abuelita would love it. 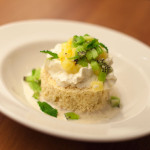 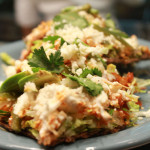 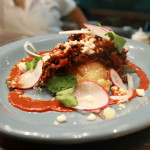 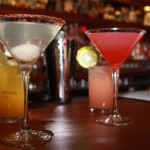 Tocolo Cantina is on a mission. In fact, it is inspired by a mission. The owners, led by Chef Alexis Samayoa, want to bring a different sort of Mexican cuisine to Long Island, one  inspired more by San Francisco’s Mission District than by Texas and the southern border, one that eases up on the cheese (without getting rid of it entirely, of course!) and amps up the brightness, that respects traditional flavors (who else has an employee whose sole occupation is making fresh corn tortillas all day every day?) but doesn’t let reverence get in the way of innovation or some kicking tequila and mescal cocktails that never would have occurred to abuelita.

Tocolo, in Garden City on Old Country Road, is an airy, spacious space, painted in the bright colors and textures of the lively taquerías and funky Latin American art scene vibe of the Mission that Port Washington native Coby Rejawan fell in love with as a business student at U.C. Berkeley. He returned to the island and recruited his brother-in-law Lloyd Rosenman and Todd Birnbaum (Their names make the To (Todd) co (Coby) lo (Lloyd) name) a restaurant developer, to join his dream. They found Alexis Samayoa, a Brooklyn native of Puerto Rican and Guatemalan background who had worked with Wylie Dufresne at WD-50 and as chef de cuisine for Alex Stupak at Empellón to take command of the kitchen, and they were off.

Tocolo Cantina doesn’t let reverence get in the way of innovation or some kicking tequila and mescal cocktails.

Today the restaurant, which opened late in 2014, serves — yes — tacos, guacamole and enchiladas, but in more contemporary interpretations that incorporate homemade lime mayo, tomato marmalades, red pepper sofritos and Berkshire pork belly. The ceviches are spiked with unexpected ingredients like the hamachi with aguachile, cucumber and gooseberry or the shrimp with passionfruit vinaigrette. Chef Alexis is meticulous about preparation, cutting the fish himself, making every dish from scratch, blistering chiles and pickling jalapeño in house. It’s Mexican street food refined and styled for a modern palate, with careful service and chic surroundings.

“One of the most important things I learned from Alex Stupak was how to use chef intuition,” says Samayoa. “How do you translate a cuisine that is so old that you don’t have references? You have to go back to la abuela, who doesn’t even articulate why her food is so good. She just does it. And that’s what you have to figure out.”

Tocolo Cantina’s kitchen is open seven days a week from 11 a.m. to 10 and 11p.m. on weekends. Happy Hour is from noon – 5 p.m. (yes, noon – 5) Monday –Friday. Starting April 2, Thursdays will feature CINCO (for the fifth day of the week and Cinco de Mayo every week) and heat up the bar crowd with DJ Danny Valentino providing the sexy lounge beats from 9 p.m.