This article appears in Spring 2015: Issue No. 7 of Edible Long Island.

Limoncello truffles are a special order at Mr. Sausage in Huntington Village. 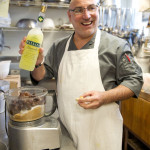 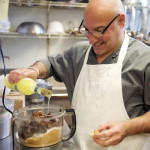 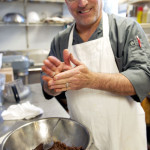 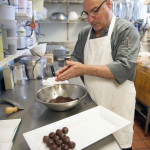 Mr. Sausage Italian Fine Foods has somewhat of a cult following. On Union Place in Huntington Village, long lines of people wait to purchase finely prepared Italian foods, homemade sausages and cheese, meats, breads and imported products, all selected by the Baldanza brothers from Calabria, Italy. They came to the United States, not speaking a word of English, in search of the American dream.

“The Calabrese have a motto: testa dura,” says Sal Baldanza. “You’ve got to think it, you’ve got to believe it, don’t give up.”

A cross between a cookie and a truffle and spiked with the Italian liquor limoncello, it is unlike anything you’ve ever had.

With that in mind, Sal came to this country in 1983 and began working as a dishwasher for $123 a week. His brothers Alberto and Joe and twin brother, Rocco, soon followed, and the foursome set out to succeed in the food business. They got jobs working in DiRaimo’s Pizzeria and then in the A&S Pork stores.

The original Mr. Sausage was owned by an older gentleman, Nick Testa, who ran it as a booth in the old farmers market in Hicksville during the 1960s. Eventually the market caught on fire, and he had no choice but to look for a storefront, which he found about a mile away. Soon, running the store was too much; he put an ad in the paper to sell it. The rest, as they say, is history.

The success of the Hicksville store led the brothers to open a store in Halesite, which they later moved to Huntington. Their space more than doubled, and they had no problem filling it with more products and a large selection of homemade ravioli. On any given day, one can enter Mr. Sausage and watch Sal at work at a specially designed ravioli station.

One of his most unique items, which must be special ordered, are Sal’s famous limoncello truffles. A cross between a cookie and a truffle and spiked with the Italian liquor limoncello, it is unlike anything you’ve ever had.

“When we give food demonstrations at events, I always have these truffles on hand,” says Sal. “At first, people are hesitant to try them, because they may not be familiar with limoncello. But once they try it… ‘Wow.’ They can’t get enough of them.”

The recipe for limoncello truffles can be found here.