Guten Tag. Wie geht’s, is what you’ll hear when you enter the Forest Pork Store on Jericho Turnpike in Huntington. Serving quality meats and German products since 1948, the Forest Pork store is like stepping back to old-world Germany. Customers, many of them German speaking, are warmly greeted by knowledgeable and attentive staff who are dressed in traditional butcher uniforms: a collared white shirt, a pointed white hat, an apron, pants and shoes.

As one waits in line for a vast assortment of homemade German sausages, the young and old alike are eating warm slices of leberkase, a finely ground baked meat loaf, or crunching on strands of mini franks.

“It’s well worth the wait,” says one customer who is ready to bite into a chunk of leberkase wrapped in torn butcher paper. 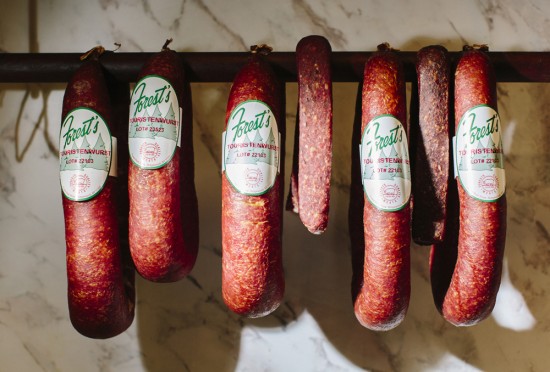 It all began in 1948, in Ridgewood Queens on Forest Avenue, thus the name, Forest Pork Store. The original owner was Karl Bayha, who learned the trade of butchering and bologna making while in Europe. He came to the United States from Germany by himself and started the business. Most of the men who worked for Karl were German, and up until 1982, for the most part, only German was spoken in the store. Karl had three daughters and no sons to pass the business along to, so in 1969 as he neared retirement, he took under his wing five men who he considered his top employees and sold them the business. His selection was based on their skills and business sense. He knew they could successfully run his business.

The business grew, and eventually two of the partners branched off leaving three partners. Even down to three, the business continued to flourish. In 1972, an opportunity arose with a store farther east on Long Island in Huntington. The store had been a butcher/deli and a farmers market. They were a good customer of the Forest Pork Store and sold many of their products. When it came time for them to retire, they offered the Ridgewood owners the building. Before long, the second Forest Pork Store was in business.

One of the three partners was Hanse Schiefele, whose son John eventually started working for his father. As the oldest of the partners retired in 1993, young John became a junior partner, along with Walter Kump, who would eventually replace Hanse. 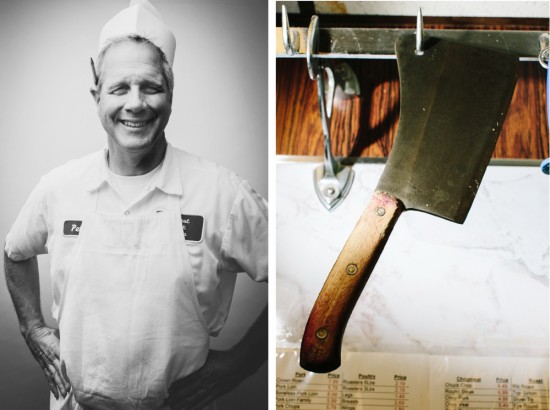 Today, the Forest Pork Store is owned by three partners, John Schiefele, Walter Kump and retired NYPD officer Peter Lanwes, who happens to be John’s brother-in-law. Peter was hired in 2007 as a public relations and retail person, a job that did not require a meat background. The three partners, along with about a dozen full-time employees, have been successfully managing both the Ridgewood and Huntington stores. All these years later, they have continued the German tradition of sausage making that had been passed down from the original owner, Karl Bayha.

“It’s funny,” says John Schiefele, head butcher and bologna maker in the Ridgewood store. “My father started making 80 to 85 different products. My father thought those products would eventually die off in 10 years. It’s not the case. In fact, the opposite has happened. Our products are more in demand than ever before, and no one else is making them anymore. New generations are more willing to try products they’ve never had before, like bloodwurst.”

“Or suelze,” Peter Lanwes chimes in. “Suelze is a Bavarian-style head cheese. There is no cheese in it,” Peter laughs.

For those who may not be quite as adventurous, there are a number of products more suited to the palate. The most popular product still remains their homemade frankfurters available in four varieties: the old-fashioned in a natural casing, saitenwurst (long wieners), a skinless variety or their famous cocktail (mini) franks. 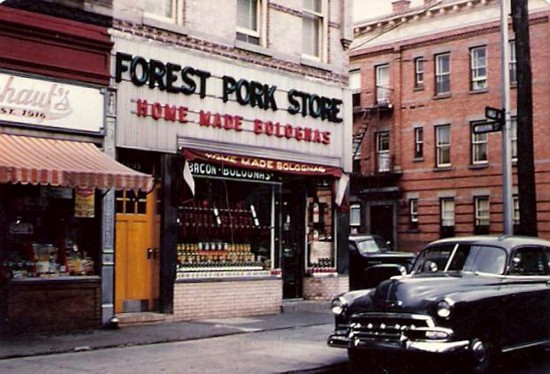 Sausages such as bratwurst, knackwurst, krainerwurst, bauernwurst and weisswurst are also popular products, as well as their homemade bolognas and an assortment of salami. The Forest Pork store offers a double-smoked, thick-cut bacon, smoked butt and hams, fresh meats and prepared and marinated meats and chicken. All the products except for the steaks, the chops and roasts are made in the Ridgewood store, along with all the items in their expansive catalog. They are made and delivered daily to Huntington. The Huntington store cuts the steaks and makes all the roasts, along with German potato salad, coleslaw, macaroni salad, cucumber salad and homemade rolls.

The products in both stores are handmade in the traditional style, and all the cutting and mixing equipment is German made. Imported products such as mustard, pickles, sauerkraut, jams, jellies, dumplings, spaetzle, stollen (German holiday cake) and 20 different German beers can be purchased; regional items, such as pinkelwurst, served in northern Germany, is also available.

COOK We love one pot meals and die Herren at the Forest Pork Store shared one of their favorites.