A devotion to mussels. 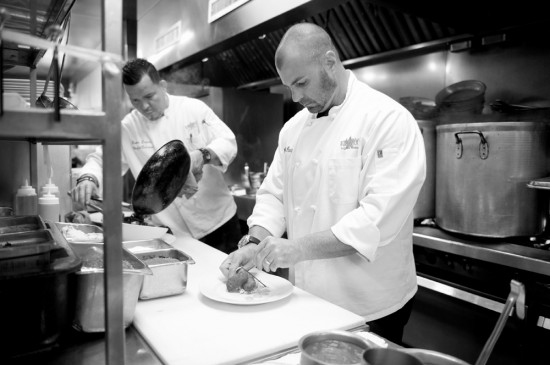 One might be tempted to genuflect during the dining ritual at Waterzooi Belgian Bistro in Garden City. Mussels, or moules— the national dish of Belgium—are revered there, and a meal at Waterzooi approaches a religious experience.

There’s a sense of sanctuary and old worldliness that permeates the place. The dining room suggests a grotto, with cream-colored stucco walls and vaulted ceilings. The eye is drawn to monastic hand-blown stained-glass windows.

Entrées are served with order and devotion. A deep black ceramic vessel is placed worshipfully on the table, illuminated by votive candles. A waitperson lifts the lid on the pot, releasing a plume of steam that ascends toward heaven, revealing more than two pounds of inky blue mollusks drenched in a savory stew. The nostrils are tickled with the scent of brine and aromatic seasonings. A long ladle is dipped into the pot and glistening, wedge-shaped mussels clatter into a white-rimmed bowl, afloat in a sea of creamy broth.

Yes, at Waterzooi, there is respect for tradition, but the experience is far from sacrosanct. Racy, red leather banquettes line the room, and the atmosphere is more boisterous than pious. Everywhere you turn, couples, seniors and families are engaged in lively conversation. They dip into communal moules pots served with crispy frites and housemade mayonnaise, for a helping of age-old comfort from the sea, often with a decidedly modern twist. 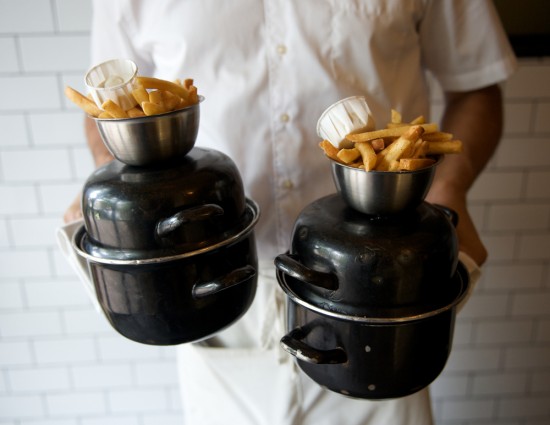 One has to do a little homework to get the backstory on the name that likely has you scratching your head. Water-what? For the unenlightened, waterzooi is the Flemish term for a traditional Belgian stew that combines seafood in aromatic stock with fresh herbs and vegetables and is finished with butter and crème fraîche. Loosely translated, the word means “water” and “simmer.” The food cooked in the liquid absorbs the flavors from the broth.

In reimagining the Belgian custom of mussels served with frites, Waterzooi executive chef Ed Davis has developed endless variations on the theme, from traditional bouillabaisse to Thai-inspired moules pots. He says the concept for the restaurant—which opened in 1998—began with a pilgrimage.

“We went over and spent time in Brussels—Bruges and Ghent—traveling around, speaking to chefs and getting into other restaurants,” says Davis. “The idea was that we could take the backbone of what they’d been doing there forever and put our twist on it back in New York.”

Davis says the restaurant serves an average of four to five thousand pounds of mussels per week, which over 16 years amounts to roughly three and a half million pounds of mussels prepared and eaten. “Give or take a million,” he adds.

Mussels are line cultivated and sourced from the deep, cold waters of Prince Edward Island in Canada. The cultivation and water temperature assure a uniform consistency year round, without grit, as the mussels never touch the ocean floor. 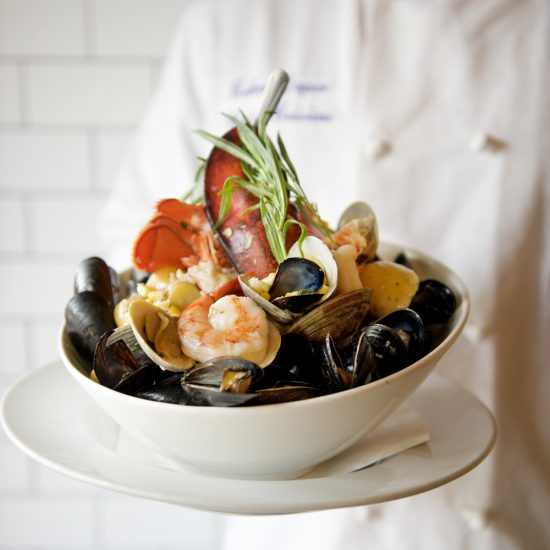 Since opening, Davis says Waterzooi has developed a loyal group of disciples. “We’ve got people who have been coming in from day one that would freak out if we ever took their favorite Homard [lobster] pot off the menu, or the Thai pot that they’ve been enjoying forever.”

Patrons can choose from more than a dozen styles of moules pots. Davis says if you ask 10 different customers to name their favorite pot, you’ll likely get 10 different answers, but he suspects the Homard pot would be nominated as a top favorite.

“The Homard is one that really knocks people’s socks off because it’s done with big chunks of lobster meat, with knuckle, claw and tail meat,” says Davis. “It’s a nice, decadent dish finished with the freshest of scallions that are julienned right over the top, so when the lid comes off you see bright green and you get hit with a sweet green onion flavor that cuts through some of the richness of the lobster meat and the bisque that it’s cooked in.” 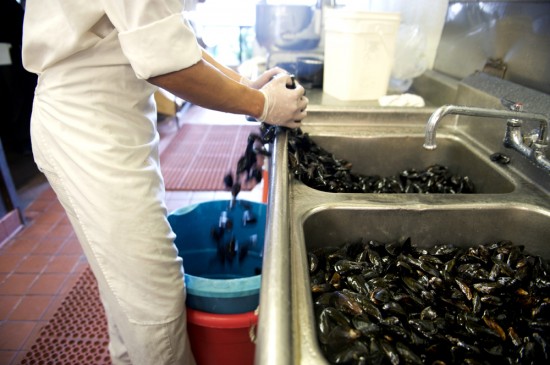 Davis says the variety draws customers back. “The mussel pot and Belgian beer, it’s a very festive thing—there’s something for everybody. You get to enjoy two or three pots on a table of six or eight, and also enjoy some of the savory items on the menu.”

The perennial pairing with mussels is twice-fried frites and housemade mayonnaise with freshly squeezed lemon juice, a combination that Davis suggests transcends perfection.

“The mayo is probably as addictive to people as the mussels themselves,” he says, and believes the simplicity of the sides makes the combination timeless.

“These recipes really haven’t changed,” says Davis. “We take a fresh-cut potato and fry it at two different temperatures so it’s light and crispy with a little bit of salt and pepper. That’s it. There’s nothing else that goes on it. It’s as pure as that.”

“It’s a safe bet that we will sell as much of that dish on a hundred-degree day as we will in the middle of February,” says Davis.

Waterzooi opened well before the Belgian beer explosion and takes its beer selection seriously, offering 130 to 150 Belgian-style or Belgian-influenced beers, but nothing domestic or mainstream. They also offer Belgian-style beer tastings.

With some three million pounds of mussels served, the team at Waterzooi knows that ultimately, those blue bivalves are the Holy Grail.

“The magic—and I guess the part that keeps people coming back—is when the mussels steam open into the sauce, it’s the mussel itself finishing the flavor,” says Davis. “So, while we obviously have a large variety of different pots, you still know you’re eating mussels. When you get to the bottom of the pot, you can still taste that unique freshness from the shell.”

All photos by Doug Young

FIND OUT MORE We have more mussel devotion right here.