Travel and taste four continents in as many village blocks. 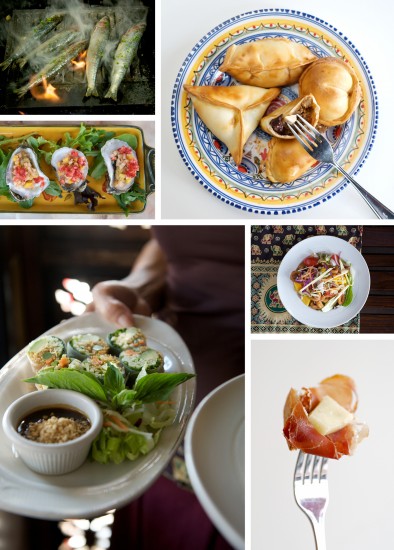 Sure virtually every town and village on Long Island features Chinese take-away, a pizza parlor and at least one Irish pub, but when it comes to global cuisine, when you want the kind of dazzling diversity on a single block you might find in the boroughs, there is really only one place to go: Huntington Village, where you can dine like a jet-setter without need for a jet or even sensible shoes. If your army travels on its stomach, it should be traveling in Huntington Village. Where else can you get French, Greek, Japanese, Argentinean, Pakistani, Indian or Italian meals in such close proximity?

It would be impossible to cover all the international cuisines of Huntington in one article, but in honor of our travel issue, I visited (or revisited) some of Edible Long Island’s favorites and, instead of just eating, had a chat with the owners to find out how they’d gotten there. The restaurants each have a different cuisine and feel but share immense pride and the desire to promote their native cuisine and culture in their adopted country and to contribute to the tapestry that is Huntington Village.

The Garcia family was about to lose everything—business, home, savings—in Argentina’s economic and political crises of the early ’80s. Instead, they pulled up their roots and headed north to the U.S. Hugo Garcia began as so many immigrants do, in the kitchen of a restaurant, washing dishes.

He quickly began prepping and assisting the chef until he could run the kitchen himself, and did.

But it was when he got out on the floor that he really shone. “Iwas never a chef,” says Garcia as we sit in a window-lit table sampling alfajores—a small soft cornmeal cookie sandwich of dulce de leche rolled in coconut flakes made by Garcia’s wife, Romana — “I always preferred contact with people to the kitchen.”

As a waiter and maître d’, Garcia had natural charm that eventually caught the attention of an investor who wanted to open a French restaurant in Huntington Village. That was Bistro Cassis, opened in 1982 and still one of the most celebrated restaurants in the village. That group has continued to open restaurants in the French vein, but it is in Café Buenos Aires that Garcia’s own roots come through. From the wall that is dedicated to Argentinean fútbol, with photos of Diego Maradona and Lionel Messi lovingly displayed alongside family photos and maps and flags of Argentina, to the empanadas without which no Argentinean day is complete to the famed parrillada mixta—a carnivore’s make-no-apologies banquet of grilled sweet sausage, skirt steak, chicken, sweetbreads, short ribs and black sausage on a tabletop grill—to the tango at Sunday brunch, “We put our hearts in the Argentinean touch of my family.”

And Garcia is not done. In the future, look forward to Café Mendoza—named for Garcia’s home province in Commack and focused on the foods and wines of his native home.

Ali Rahimi was a college student at Beirut University in search of adventure when he came to the United States more than 40 years ago. A native of Afghanistan, he was fascinated by the ease of travel around the U.S. “I became more and more adventurous,” he says as we sip tea and nibble on sugar-coated almonds in the cozy, tapestry-lined atmosphere of his restaurant, Ariana, which he opened in 1994 on Main Street and which he runs with his wife of 15 years, Nazifa. “One thing led to another and I stayed.”

Rahimi tried different careers in clothing, insurance and import-export before entering the food business with an Italian-American friend. His experiences taught him to be flexible, and so Ariana began as a fusion of different cuisines and continues to be flexible today.

“From the beginning I found familiarity in the Italian and Afghan flavors,” he says. “The Afghan country is more limited; it doesn’t have the same variety of edibles as here. So I concentrated on seafood, which they do not have in Afghanistan. It is a Mediterranean base with Afghan flavor, which makes it flavorful yet unique. I might substitute oregano and basil with cilantro, for example.”

So Afghan dumplings—aushak—take on a ravioli character, stuffed with roast pumpkin and topped with meat sauce and yogurt. Mussels get the Afghan treatment with spicy harissa sauce. Kebabs and rib eye coexist happily. In another old-meets-new twist, much of the Afghan cuisine is traditionally vegan and vegetarian, which has attracted a new clientele of health-conscious eaters who do not want to give up flavor or texture. “My best customers are people who have traveled abroad, and that is what you have in Huntington,” says Rahimi. “My customers have broad and sophisticated palates.”

For Tiki Choladda, the success of her restaurant, Thai USA, is not measured solely in the excellence of the food. “Everybody in town knows me,” she says with great satisfaction. “We have been feeding three generations and they still come as families. I hold the babies and the kids kiss and hug me. When I got here I knew no one. Now if I walk on the street everybody knows me.”

Choladda and her ex-husband and still-partner, chef Danny Choladda, have been building their reputation for terrific Thai food since 1996, when they came to Long Island from Manhattan where Danny was executive chef at a popular downtown eatery. Today the restaurant, with its modern Asian decor of dark wood and bamboo and an urban feel and its friendly service—where the staff, most of whom have been with Thai USA since the beginning, knows all the regulars—maintains a loyal clientele.

And the food is excellent. While the flavors are traditional, the Choladdas make adaptations to assure freshness and to fit into the American lifestyle. “We use garden vegetables from the North Shore,” says Tiki Choladda. “They don’t have to all be traditional Thai vegetables because we can’t find them. It is better to use local bok choy, broccoli and everything that is available fresh. The important thing is the Thai seasonings; that’s what people love about coming here.”

The delicate rice paper hand-stuffed with shrimp, tofu, sprouts and cucumber crackles with freshness and has a dab of plum sauce for sweetness and depth. It is a favorite of healthy eaters. Children love the entry-level satays. The crisp calamari tops a salad of mango and tomato, with a ginger, peanut lime dressing that is beautiful to look at and even better to eat. The chili and garlic are moderated, but, Tiki Choladda says, over the years her clientele has stepped up. “Many Americans want more spice. Now they eat it Thai-spicy. I say okay! That’s good!”

The Portuguese musical genre of fado may be thought of as mournful or sad, but there is nothing mournful about Fado restaurant on New Street. The big windows let in the light, and lunch is like a sun-drenched day in the Algarve, with seafood that tastes as though it were pulled from the sea just minutes before. Hearty chouriço [Portuguese for “chorizo”] spikes many of the dishes, and every wine and port comes from the many regions of Portugal.

The owners, too, are passionate and friendly people. 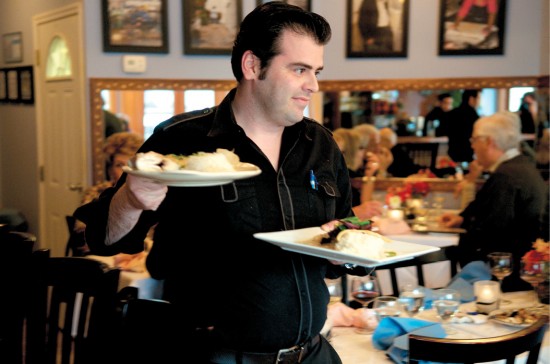 It was love at first sight “for me,” says Eddie Nobre of his now-wife, Alison. “But for her it wasn’t.” In Portugal he was a pilot who had trained in Russia. He spoke five languages. But when they met in Centerport, she was a restaurant owner and he was a mere valet parker trying to start a new life in the U.S. They chatted occasionally, but it wasn’t until he took the liberty of taking the car to a gas station and filling it up as she was lunching inside one day that she was convinced. “That’s when I knew.”

They married within the year and, thanks to family and friends and serendipity, opened Fado together. “Alison went to Portugal and loved the culture,” says Eddie Nobre. “She really immersed herself in it. And since there was no Portuguese restaurant in Huntington, we knew it was right.”

But within minutes of making the decision, Nobre was on the phone. “I called my mom,” he says. “I said ‘Help. To make it Portuguese I need you to train our chef.’”

Alison Nobre continues, “She flew over with a satchel full of recipes and spent six or seven months teaching our chef!” Alison, too, learned everything she could. “I spend so much time researching recipes, going through every cookbook for ideas and techniques.”

Five years later, Fado gets rave reviews from critics and diners alike for its robust, uncompromising dedication to excellence and tradition. The green salads are dressed with a whisper of fine Portuguese olive oil. The salada de polvo—octopus salad—is unbelievably tender. The bacalhão a bras—salt cod with potato, onion and egg—is hearty yet balanced. The handmade, aged chouriço is satisfyingly meaty.

“We love to cook,” says Eddie Nobre. “We cook with passion and people feel it, and that’s what moves me. I have learned that every table of diners is a world, and the most important thing for us is what it says over the door when you walk in: Enter as a stranger; leave as a friend.”

I certainly feel as though I have made friends in this journey through the global village that is Huntington. And that there are more strangers waiting to become friends as we continue to gather the culinary histories of Long Islanders who started life in far-flung places, but who have made this their true hearth and home.

All photos by Doug Young

FIND OUT MORE “If your army travels on its stomach, it should be traveling in Huntington Village.” Plan your culinary infiltration.