Alex Lee: Veneration of a Vegetable

In the kitchen of the majestic Glen Oaks Country Club in Old Westbury, chef Alex Lee sits back in his chair and weighs three firm, unapologetically misshapen heirloom tomatoes in a rainbow of hues in his hands. • Photographs by Doug Young

In the kitchen of the majestic Glen Oaks Country Club in Old Westbury, chef Alex Lee sits back in his chair and weighs three firm, unapologetically misshapen heirloom tomatoes in a rainbow of hues in his hands. “See these?” he asks, displaying them with pride. “These are perfect,” he states with a deep sense of satisfaction.

For an instant, he is not a living legend; a respected longtime colleague of Daniel Boulud, trained by the Alain Ducasse. He is not the culinary hero of David Chang, the mastermind behind Momofuku, nor is he the Iron Chef challenger to Cat Cora. In this minute, he isn’t even the reason braised short ribs and pork belly are now prolific among today’s best menus (for which we are all very grateful).

He is simply a man sharing a moment with his tomatoes.

Looking back up at me, he says with gravitas, “Creativity comes from the garden.” I nod in assent. “I mean, it comes from a lot of places, but often, dishes that are important to a culture are stemmed from abundance, so I look into the history of things. How was it used in its original context? I look at these tomatoes and think, ‘Well, how did they use it in Mexico? What did they do in China? Remember what we did in Italy?’ I want to know the story of my ingredients in order to create the next chapter and marry what I know with what I imagine.”

For this celebrated chef, it really is all about these stories. Unlike some, Lee is not a magpie of accolades and awards, eschewing the célebrité he’s rightfully earned in favor of home and family; a remarkable man, he considers one of his greatest achievements bringing his 104-year-old English grandmother to tears with a short rib that reminded her of his Chinese grandfather’s cooking. Rather, he is a collector of tales of origin and history, and a colorful teller of them. 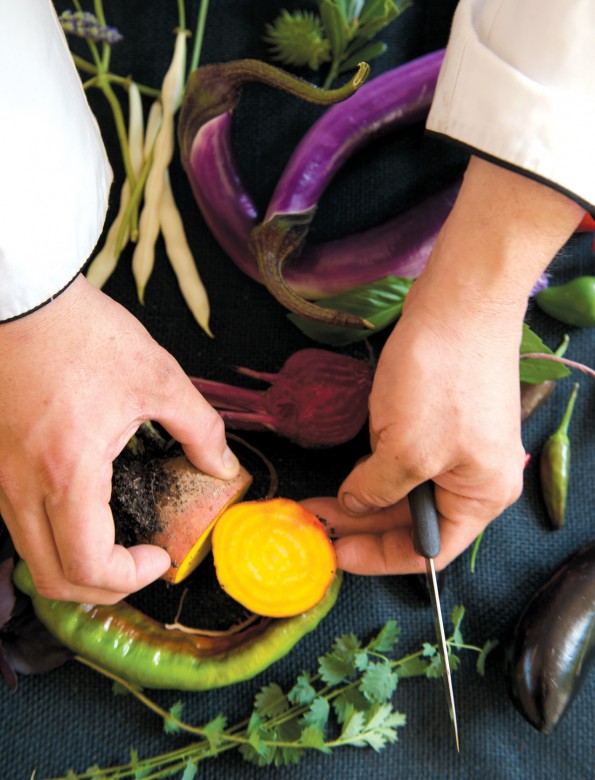 His own story began with his first garden.

“I was 12 or 13 years old when I started gardening,” Lee reminisces. “The relationship of growing and nurturing a plant from seed, then reaping the rewards and making something beautiful out of it; I was amazed by the cycle. I love that relationship with food, of getting perfect ingredients, and giving it proper respect,” something he’s always done throughout his classically trained career, letting natural flavors sing and enhancing without ever masking. Even today, he continues to research traditional uses of unusual ingredients—and finding unusual uses for traditional ingredients.

For inspiration, he taps into the world around him by getting to know his people, making the personal connections that were so important to him during his time as chef de cuisine at Daniel.

“Working there was like being in an epicurean U.N. The experience helped to develop my palate and use ingredients in refined ways that give food nuance while keeping sacred French method and technique, but it also introduced me to wonderful people, who brought to the kitchen their own ways, their own stories.”

For in food, feeling is completely transmutable. Lee cooks with passion, holding in great reverence “grandma cooking,” an affectionate term he uses for traditional recipes that call for a healthy heaping of heart.

“The soul of cooking is at home,” he says. “It resides in the hands of grandmothers, the people who pass things down to the next generation. This kind of cooking is a part of you—part of your makeup, even as the food world continues to transform.” As a native Long Islander, he remembers, “I had friends growing up who were Italian, Jewish…and the common denominator between us all was that all of our grandmothers know how to cook.”

His own Cantonese grandmother is often credited as a catalyst for his career, awakening him to the world of gardening and country cooking. “A lot of good cooking starts with country cooking. It’s fresh, seasonal, thrifty, hearty food that you can just feel was made for family or the closest of close friends.” Exposure to this type of cooking across cultures is something he considers one of the greatest gifts he’s been granted.

“People have been very generous to me, and I’m extremely grateful for that.” Sincerity and humility are apparent in every word. “They would bring me food, and allow me to experience a little bit of who they were. Because what made me great were the people around me,” he says in an unfitting past tense. “I try to show everybody respect, and spend time with them, to get to know them outside of the restaurant. Each dish is like a glimpse of who they really are.”

“I feel it in my heart when I eat these things,” he states simply, “and I learn from them,” a master reluctant to relinquish his role as student.

Today at Glen Oaks, he continues to build his knowledge, encouraging his multicultural team to bring in seeds of their family favorites for each year’s plantings. And equally important, he continues to dig into the stories of people in his kitchen as he does the soil in his basil-scented gardens, celebrating the many differences that make…well, all the difference.

FIND OUT MORE Four pages are just not enough for chef Alex Lee. We’ve got more of his vegetable veneration and his participation in this year’s Meatopia X: the Carnivore’s Ball.

DIRECTIONS
The croutons and apples are prepared in advance.

FOR THE CARAMELIZED APPLES:
Heat a small sauté pan over medium heat. Toss the diced apples in a small bowl with the sugar to coat them. Add the butter to the preheated pan and immediately add the apples, cooking for 5 minutes until they are caramelized. Set aside to garnish the soup.

FOR THE CINNAMON TOAST CROUTONS:
Preheat an oven to 400°. Melt the butter and add the diced bread and toss till coated. Place on a cookie sheet and bake for about 12 minutes till golden brown. Toss with the sugar and cinnamon. Set aside.

FOR THE SOUP:
In a stockpot over medium heat, melt butter and sauté onion, carrot and apple until tender, about 8 to 10 minutes, stirring occasionally. Add the diced pumpkin or kabocha squash and cook for 5 more minutes. Add the chicken stock and cook for 25 minutes until everything is soft and the pumpkin/squash is starting to fall apart. Add the cream and simmer for 5 more minutes, seasoning to taste. Let cool a few minutes and carefully puree in a food processor or blender.

Divide the soup among 4 bowls. Garnish with the caramelized apples, cinnamon toast croutons and a dollop of crème fraîche. You could also garnish the soup with chopped chives or chervil sprinkled on top.