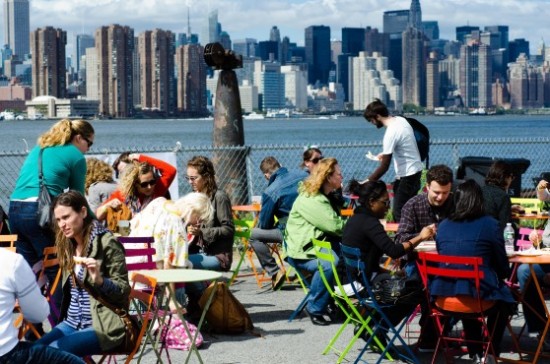 So close, yet so far. That pretty much sums up how Long Islanders — especially we Suffolk Country residents — view anything that has to do with the five boroughs. No matter that Queens is still LIE reachable and navigable without a bridge. No matter that Brooklyn is attached to our island. Traffic and the dramatically different landscape make the city as foreign as Timbuktu.
It takes a lot to draw this central Suffolk dweller to the outer edges of Long Island, but when an event as alluringly named as Taste Williamsburg and Greenpoint, two epicurean enclaves, promises samples of some of that borough’s finest artisan foodstuffs while ensuring that a measure of profits goes toward the community’s Northside Town Hall, you’d best believe I will burn that $4+ per gallon gas.
More than 51 vendors will purvey their signatures at this four-hour event on Sunday, September 7, at the rather picturesque location of the East River State Park. There are a few familiar names I’m particularly fond of, such as Teddy’s Bar and Grill, a favorite of our friends, lifelong residents of Greenpoint, the Nowakowskis. I have many fond memories of this friendly, casual and eclectic venue whose stellar brunches and baby-sized breakfast burritos are often the cure for what ails you.
Having decided after 30 years, that I am fond of ice cream (sensitive teeth be damned), Phin & Phebes Ice Cream seems rather exciting as well. With 14 percent butterfat for a super premium experience and flavors like Vietnamese iced coffee filled with the joy of chicory and cardamom, this will most definitely be a stop, a cool contrast after Oslo Coffee Roasters.
Of course, my particular weakness is baked goods, and Bakeri, with locations in both neighborhoods, is a powerful magnet. I plan to follow my nose to their orange brioche, lemon cake, bread pudding, biscuits and skolebrød, a Norwegian custard bun dusted with grated coconut, the likes of which I’ve never encountered. Their smoked and cured meat savory sandwiches could be a draw for a post-pastry lunch, but surprisingly, vegetarian options like tomato jam, gruyere and arugula on focaccia are calling my name even more loudly.
With pastry out of the way, dessert is non-negotiable, and Brooklyn Cupcake with their Madagascar vanilla, Vahlrona chocolate, and oddly touted Philadelphia cream cheese, seems ready to wow. I’ve been resistant to the cupcake craze (too much frosting; too much cake top!), but after a transcendental experience in Vancouver at a place named Cupcakes near Robson Street, I’m now a believer. Flan de queso, French toast, tiramisu, coquito (coconut cake soaked in coconut milk, egg nog and rum with mascarpone whipped cream) and rainbow cookie, a quintessentially New York treat … shoot, I may end up in a sugar coma.
I’ve wanted to try Cafe Colette, which serves refined comfort food like chicory and fried chicken salad, wild nettle and ricotta ravioli and house made cavatelli. Also on my list is Cafe Mogador, where  Middle Eastern flavors bring new life to breakfast (poached eggs over roasted tomato and halumi cheese, anyone?) and exciting combinations to local meats such as Hudson Valley duck and classics such as salmon, hangar steak and more. And with a name like Extra Fancy, who can help but be excited for their humble-sounding yet elevated inventions? Deviled eggs reach the next level with smoked trout roe, pickled mustard seeds and celery leaf salad; wings are reinvented as duck drumettes with smoked onion jam, and fish and chips, lobster rolls, trout, flounder and clams all make appearances.
This list of excitement could go on and on, but instead, I’ll stop here and invite you to head to Brooklyn tomorrow. With live music, drinks by Brooklyn Brewery and plenty of chances to wine yourself up, it becomes easier to remember how easy it is to be transported to a whole other world, just on the other end of our island.
Visit www.tastewg.com for more information, or follow #tastewg to jump into the conversation.