It’s September. Back to school and back into the groove. If all this routine has you kicking and screaming, the antidote can be found in our fall no-passport-required travel issue of Edible Long Island. 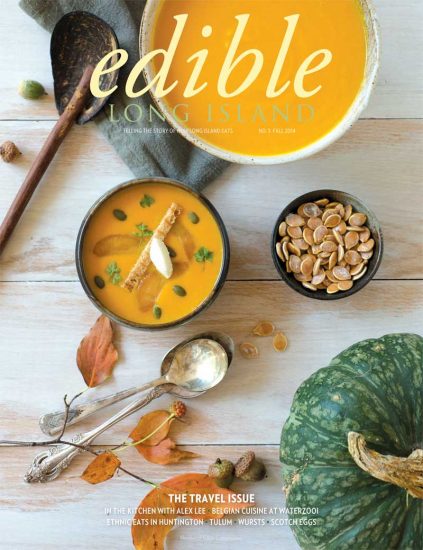 It’s September. Back to school and back into the groove. If all this routine has you kicking and screaming, the antidote can be found in our fall no-passport-required travel issue of Edible Long Island. Readers with chronic wanderlust can taste the flavors of five continents all within the borders of Nassau and western Suffolk counties.

We embark on our journey with Notables on African cuisine at Taste of Africa in Deer Park, Chinese Pu’er tea at Sip Tea Lounge in Huntington and a Long Island-brewed German-style Kölsch beer at Plattduetsch Park in Franklin Square.

Huntington Village is an ideal spot for a multicultural culinary adventure. “If your army travels on its stomach, it should be traveling in Huntington Village,” says writer Natalia de Cuba Romero in Ethnic Eats. Natalia highlights Afghan, Portuguese, Thai and Argentinean cuisines. Beyond that, Huntington’s global eateries also include French, Italian, Persian, Japanese, Indian, Pakistani, Greek, Mexican and a few fusion spots; all within a few blocks of each other. A few miles south of Huntington Village, Edible Traditions guides hungry Long Islanders as they rev up for Oktoberfest with authentic German sausages, cheeses and trimmings at the Forest Pork Store.

In this issue we go In the Kitchen With chef Alex Lee, a Long Islander and world-class chef who infuses multicultural flavors in his kitchen. He shares with us his recipe for pumpkin soup with cinnamon toast croutons, caramelized apples and crème fraîche, featured on our spectacular cover.

What’s in Season explores Scotch eggs, the quintessentially British snack food. In spite of their Anglo origin, wouldn’t Scotch eggs be an ideal American football snack, perfect for tailgate parties? Well, they are easier to make at home than you’d think, and we have the recipe.

Lastly, our photo editor Doug Young (who did need a passport) takes us to Mexico with a beautiful and mouthwatering photo essay on the Mayan city of Tulum.

Look for our fall travel issue to hit the streets next week. Bon Voyage!