Sticke Handwerker, the Long Island debut from Secret Engine, will be released this Friday at Tap and Barrel, The Black Sheep Ale House and a to-be-determined location in Brooklyn. 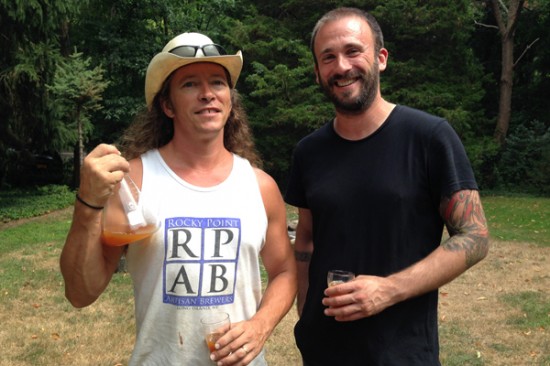 “Sometimes the beer just tells you when it is ready,” says Mike Voigt of Rocky Point Artisan Brewers about their recent collaborative brew with Secret Engine Brewing of Brooklyn. Mike Mare, brewer and co-owner of Secret Engine, is currently trying to find a permanent home for the brewery while still getting his beer out there. Though the original plan was to wait until later this month, Sticke Handwerker, the Long Island debut from Secret Engine, will be released this Friday at Tap and Barrel, The Black Sheep Ale House and a to-be-determined location in Brooklyn.

Mare has been brewing for more than 10 years and decided to make the leap to commercial brewing about three years ago. However, as the guys at RPAB know all too well, finding a suitable home for your brewery and an agreeable landlord is not the easiest task. While the search for a headquarters for Secret Engine in Brooklyn continued, Mare decided to reach out to established breweries for some advice and a possible collaboration. As a former touring musician, what Mare missed most about being on the road was the ability to connect with people from all areas and backgrounds, so he sent out e-mails to about 600 breweries. One of the few responses he received was from Mike Voigt of RPAB.

The two met at Voigt’s house to enjoy a few beers, play guitar and get to know each other. That same night they started throwing around ideas for a collaboration and over the next month Sticke Handwerker was born. “We have majorly different brewing styles,” says Voigt. Though they both feel Sticke Handwerker truly reflects the two breweries. RPAB tends to brew to style with small tweaks, while Secret Engine is more outside the box. Together they created something unique. So unique, in fact, when we asked what type of beer it is we were told, “You have to delve around to find out what the secret meaning of the secret beer is.” Thus leaving everything to the palate of the taster.

We were able to try this mysterious beer right out of the fermenter at RPAB and can attest it is one of a kind. Sticke Handwerker hasa velvety mouthfeel and gobstopper-like array of flavors and aromas. The first release this weekend will be in firkins, with kegs to follow. This cask-conditioned version of the brew will be lightly carbonated and served close to cellar temperature allowing the flavor to shine through. Voigt and Mare are already brainstorming their next brew, which is rumored to include mint, so this won’t be the last Long Island sees of the Secret Engine Brewing/Rocky Point Artisan Brewery partnership.