With as much food and drink as there is live music, nobody ever goes hungry at the Philadelphia Folk Festival. 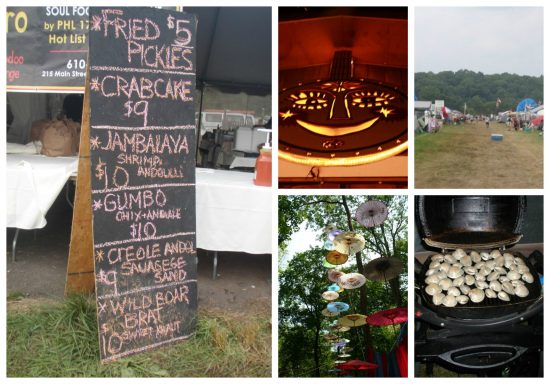 Next month my husband, Brad, and I will be making our tenth trek to the 53rd Annual Philadelphia Folk Festival, which runs from Thursday, August 14 through Sunday, August 17. Sponsored by the nonprofit Philadelphia Folksong Society and hailed by Rolling Stone magazine as one of the best “cool summer music festivals” in the country, this historic grassroots celebration of music is held on the grounds of Old Pool Farm in Schwenksville, Penn., about an hour northwest of Philadelphia. In addition to 75+ hours of live music (folk, bluegrass, jazz, Celtic, country, world/fusion, singer/songwriter, dance, etc.), campers and day trippers can also shop in the juried craft area, participate in performer-taught workshops and showcases or engage in some friendly guitar competition sponsored by Martin Guitar. There are also plenty of activities for kids in shady Dulcimer Grove: crafts, jugglers, storytellers and the like. And then there is the food and drink.

In 1962 2,500 folkies gathered at a farm in Paoli, Penn. to hear Pete Seeger, Reverend Gary Davis, the Greenbrier Boys and other pioneers of folk music. Feeding a crowd this size was not particularly daunting as Folk Festers simply brought their own food and shared it with those who did not. Today, the Folk Fest attracts about 12,000 concert attendees and 5,000 campers over the course of the four-day event. Feeding the hungry and thirsty masses is an undertaking the PFS has embraced wholeheartedly with its Festival Foodie Initiative. There are no dirty water dogs at the Folk Fest. The PFS has curated the food vendors, giving everyone from vegans to omnivores healthy and tasty options. In addition, vendors are encouraged to offer seasonal and local foods. While the musical lineup brings ‘em in with the likes of Old Crow Medicine Show, Shemekia Copeland, Janis Ian and Loudon Wainright III (to name just a few), the eats lineup satiates hungry folkies with falafel and Mediterranean nosh from Sara Festivals, pulled pork, chicken and smoked corn from Cape May Smokehouse, vegetarian and soul food from Nyota’s Ting, ice cream and non-dairy sweets from Little Baby’s Ice Cream, “simply good food” from Vernalicious, hot and cold coffee drinks from Coexist Coffee and many more. This nod to local seasonality also includes a beer tent serving cold craft beer from Yards Brewing Company in Philadelphia.

Brad and I, along with about 5,000 intrepid friends, camp at the Folk Fest. The hayfields at Old Pool Farm transform into an organic community of campsites, full of generational history, playful imagination and outstanding ingenuity bound together by music, mayhem and occasionally mud. Ten years ago, as virgin Folk Festers armed with a tent, air mattress, sleeping bags and a large bag of little neck clams from Long Island Sound, we queried some volunteers at the gate about where we could set up camp. Next thing you know, we were welcomed into the Camp Woody fold. I have always suspected that bag of clams was our entrée to our newfound and now close friendships at Camp Woody. Anchored by a large blue and white circus tent, Camp Woody is a maze of sleeping tents, a clean and private shower with hot running water, as well as a bar and kitchen tent. The kitchen tent, set up and primarily manned by a local restaurateur who is one of us, is replete with coolers, tables, propane grills, cast iron skillets, a sink and even a spice rack. We still feast on clams and our camp meals have been known to include lobster tails and shrimp (thanks to that local restaurateur), steaks, homemade spaghetti and meatballs, brats, sumptuous bacon and egg breakfasts and camp-brewed coffee. Everyone brings something to the camp table.

At the end of it all we will have had a blast. We will be dirty, tired and spent, but one thing is for sure, we will never go hungry at the Philadelphia Folk Festival.