Moustache released Mojito Pale Ale, a light and minty summertime staple from their days as home brewers, in June. The brewery followed with July IPA, the latest installment in an aptly named monthly series of IPAs, brewed with all English malts and hops; Franco ‘Murica Pale Ale, a drier, peppery version of One Drop with a French saison yeast and Ginger Blueberry Tripel, which “smells like blueberry muffins,” Lauri says. 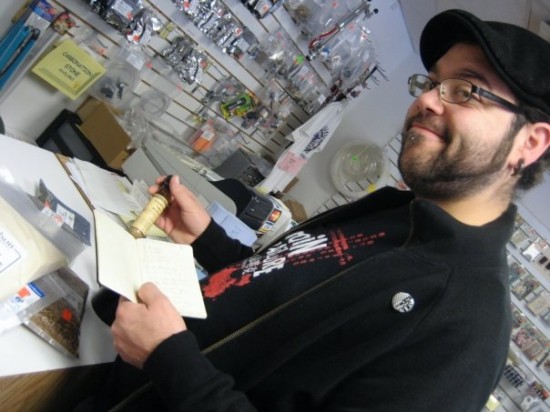 A woman hesitantly scans the description of One Drop Pale Ale, mouthing “American hops give it a citrusy character” and “sweet malty backbone.” She approaches Lauri Spitz. “I’ve heard of you guys. What’s your story?” she asks.

This question was repeatedly posed to Spitz at the Riverhead Farmers Market, which uncharacteristically launched indoors in February. During my visit on a Saturday in April, the basement-of-a-church-evoking showroom on East Main Street is stuffed with shoppers scanning tables of artisanal stuffs produced on the East End: eggs, yogurt, coffee, and pork. Beer, too.

“We’re a new brewery right up the road. Moustache,” Spitz replies, twiddling her index finger and thumb above her lips. Moustache is owned by Lauri and her husband, Matt, the face — or facial hair — of their small two-barrel brewery. After my stop-by in Riverhead, I drive to Matt, and his dapper handlebar, at Blue Point’s Cask Ales Festival in Patchogue. He’s serving two beers, including a bourbon-laced cask of Everyman’s Porter, in a tent alongside Long Ireland and Greenport Harbor, two powerhouses instrumental for enticing drinkers to travel farther east—not east, but easttttt. Before 2008, Blue Point and Southampton Publick House were the only beermakers on Long Island, then dominated by Anheuser-Busch and other globo-macro breweries. A discernible shift toward local-micro has occurred, though: six breweries have launched since 2012, increasing the total to 14. Riverhead is at the forefront of the swell, housing three, the most of any town. This includes Moustache.

At Blue Point, the queues are long and zig-zaggy. It’s humid and cramped, but the crowd is electric, especially when a cask is finished, or “kicked,” which prompts the brewery to wave the empty vessel overhead to a FIFA-like wave of indecipherable, non-unison chanting. I approach Matt, who resembles a goalie, except four-ounce beer glasses, not soccer balls, are flying at his head and hands. This hecticness prevents my attempts to start a conversation, so I stand nearby and wait — and wait.

The hectic never stops. I walk to Greenport Harbor for a pour of Hopnami, a bright, assertive, juicy, aromatically fruity IPA. As I sample, a chant starts. It’s for Moustache. 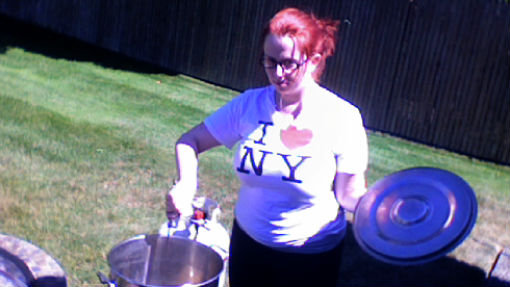 Lauri and Matt aren’t beer-newbies. They homebrewed together for nine years (and dated since high school before marrying in 2007), experimenting with stovetop-cooked stouts, dubbels, and ginger-infused witbiers. As members of Long Island Beer & Malt Enthusiasts, the area’s largest club for homebrewing (now with approximately 700 members), their beers have been poured at expo-sized events at Nassau Coliseum and Martha Clara Vineyards, often a buzzy scene similar to Blue Point. These recipes were prototypes, and with each Spring Craft Beer Festival and North Fork Beer, BBQ & Wine Festival, I tasted their evolution.

My favorite was, and remains, Everyman’s Porter, now the brewery’s flagship. It’s accurately named: a blue-collar, light-bodied porter with flavor—coffee-y, roasty and chocolaty—and the alcohol is low, near the level of Bud Light. I can easily kill one or two without effort.

The identity of Everyman’s was cemented when Matt and Lauri embarked on their journey toward Moustachedom in 2012, using Kickstarter to raise $31,413 and lease a 1,400-square-foot building at 400 Hallett Avenue in Riverhead. Build out was slow and inconsistent. A two-week clip of 15-hour days of renovations, stuffed with endless visits to Home Depot, would sputter to sparse updating on Facebook and Twitter. They continued to serve beer at events, brewing — in their garage or Matt’s parents’ kitchen in Islip Terrace — and stockpiling kegs amid tools and mounds of dirt. The feedback remained positive, but craft drinkers are inquisitive, sometimes impatient. The biggest obstacle was still money. 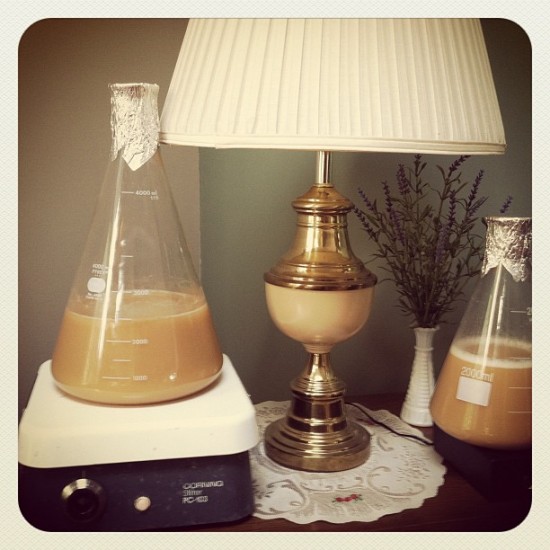 “We had a lot of family and friends help with the construction, so you can’t really force that to speed up. And Matt was still working full-time at the time,” says Lauri. “Sometimes we just had to wait to continue building out the space. There wasn’t another option.”

The Riverhead Farmers Market was a perfect opportunity to generate income. Every Saturday, growlers of One Drop and Everyman’s Porter, but also You’ll Shoot Yo’ Rye Out, a rye-malted scotch ale, and later Maiden Voyage Pale Ale, the first beer produced with their current brewhouse, “sold like gangbusters,” says Lauri. Their first day in February was nutso. “We had a line from 10:30 a.m. till we ran out around 1 p.m. It opened at 11 a.m. and Matt had to leave at 11:30 a.m. to get the rest of the beer we had at the brewery. We sold every drop we had.”

This, sales capable of wiping out an entire inventory in two hours, evoked gratitude from Matt and Lauri, but also uncertainty. “It felt great to finally get our beer to people, but it made us question if we can even supply the weekly demand here,” Matt says. “We knew we had to stop [the Riverhead Farmers Market] when we officially opened. We knew we couldn’t make enough beer.”

Moustache finally opened 400 Hallett Ave. on April 19, nearly two years after 534 backers, some anonymous, funded a pair of scrappy, well-received (and inspirational: in 2013, Farmingdale’s Barrage Brewing successfully used the website to raise $18,800 to fix their sewer) home brewers. In May, Matt quit his full-time job at Apple. He’s now brewing approximately 180 gallons bi-weekly, with each 60-gallon batch producing only four half-barrel kegs. It’s barely enough to satisfy the demands of their four-draft taproom, now open Thursday through Monday for pints and flights (a perk of the newly created Farm Brewery License), so distribution is minimal. “We have a list of 50 accounts that want beer and we’ve been able to give beer to about eight of them once,” Lauri says.

But even though scarcity remains an issue, that lingering uncertainty has dissipated.

“I think we overwhelmed ourselves more by how much we worried about getting beer out to everyone,” Lauri adds. “I think everyone understands that they can’t have it all of the time. But we worked so hard to get here and now we’re here. We need to just make beer now. That’s it.”

“We’re looking to add two seven-barrel fermenters. That’ll increase production seven fold,” Matt says. “We can produce more and brew more styles. We want to also give diversity if we can’t give an overwhelming quantity.”

This diversity has already started. Moustache released Mojito Pale Ale, a light and minty summertime staple from their days as home brewers, in June. The brewery followed with July IPA, the latest installment in an aptly named monthly series of IPAs, brewed with all English malts and hops; Franco ‘Murica Pale Ale, a drier, peppery version of One Drop with a French saison yeast and Ginger Blueberry Tripel, which “smells like blueberry muffins,” Lauri says.