Greenport Harbor Brewing Company will be hosting the grand opening of its new Peconic brewery on July 12, but there’s an expansion going on behind the scenes too. DJ Swanson, head brewer since Greenport’s inception five years ago, is now accompanied by Joe Hayes, former brewmaster at Black Forest Brew Haus in Farmingdale. 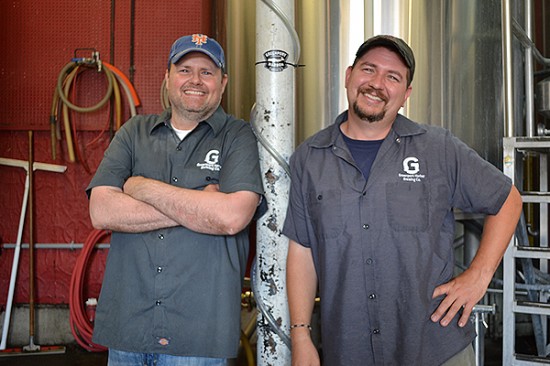 Greenport Harbor Brewing Company will be hosting the grand opening of its new Peconic brewery on July 12, but there’s an expansion going on behind the scenes too. DJ Swanson, head brewer since Greenport’s inception five years ago, is now accompanied by Joe Hayes, former brewmaster at Black Forest Brew Haus in Farmingdale.

To say the pair is happy about the union is a bit of an understatement. There was an air of excitement in the brewery, with the majority of our interview tape filled with Hayes and Swanson’s laughter and playful sarcastic zings toward each other. Hayes started off by introducing himself as Swanson’s boss and later joked that he would be reprimanded off the air all in good fun of course. The two became fast friends after meeting and realizing “we both hated everything and everybody and it just clicked.” That chemistry is evident even if you spend a short time around these two established brewmasters who followed parallel tracks to Greenport Harbor.

“I never had one of those epiphany moments,” says Swanson. “I always liked beer.” When he was in fifth grade, a Boy Scout trip took him to the Merrimack Anheuser-Busch plant to see the Clydesdales, and he was captivated by the smell of beer being brewed. Years later, he visited Boston Beer Works before a Red Sox game and was again hit with the aroma of steeping mash. Something grabbed a hold of him and soon after he bought a homebrew kit. Swanson started his professional career as an assistant brewer at Union Station in Providence, Rhode Island. He spent only a year there before being offered the job of brewmaster at another brewpub, John Harvard’s, in Lake Grove.

His brewing history, says Hayes, “was nothing as regal as that.” He got to a point in his life, after the realization he was not going to be a professional drummer, where he either had to get a real job to afford beer or start making it himself. He chose the latter. Originally he was on a quest to make the next Pabst Blue Ribbon, but fate led him to work in the tasting room of a winery-brewery near his hometown in California. After unknowingly chatting with the owner about beer and impressing him with his knowledge and jovial personality, Hayes was promoted to head brewer on the spot. Even after this promotion his girlfriend at the time challenged him by saying, “If you love beer so much why don’t you do that for a living?” Hayes spitefully accepted her challenge and went on to study at UC Davis where he graduated from the brewmaster program. Shortly after, he was offered a job at Black Forest Brew Haus, leading him to Long Island and Swanson.

Once on Long Island, the two met almost immediately, recalling, “Every festival was basically the same six guys pouring beer.” They maintained a close friendship and occasionally collaborated on beers. Swanson and Hayes both spent the next several years chugging away in their individual corporate brewpub settings.

Swanson moved on first and briefly spent time in pharmaceutical manufacturing. “Don’t let him sugar coat it-he was making drugs,” says Hayes. From there he found himself working at a vodka distillery but missed brewing and ultimately landed at Greenport Harbor Brewing Company as their first and only head brewer. With the current expansion, the time had come for another brewer. Swanson posted a want ad with UC Davis. Hayes had been toying with moving on for some time. He saw the ad, called Swanson and the rest is history.

Having two brewmasters under one roof could, in most cases, be problematic. Not at Greenport Harbor however, as Hayes says “This is the house that DJ built and I’m cool with that”. Coming from similar yet diverse brewing backgrounds and with a combined twenty plus years of brewing experience between them gives Swanson and Hayes the ability to fill in each other’s weaknesses while pushing each other creatively. One such example is this year’s fifth anniversary beer, a Belgian Dubbel that has been aged on tart cherries. The beer will be released at the combined grand opening/5th anniversary party on July 12. Bigger and better things are on the horizon for Greenport Harbor Brewing Company and though Swanson may be the boss he and Hayes will compliment each other as well as malt and hops.