Diamantis’ family story is typical of the tight-knit community of Greek Long Islanders, as I found when I researched the Hellenic communities in Nassau and Suffolk for the Ethnic Eats section of our Summer issue. 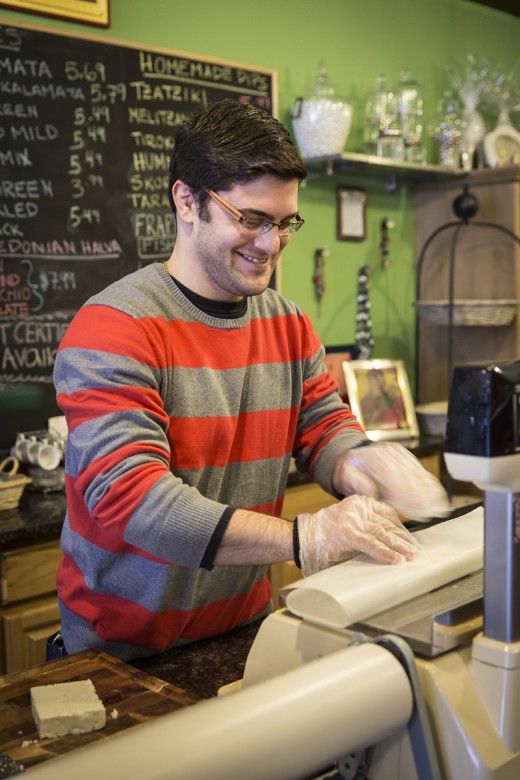 Theodore Diamantis wraps up his exceptional feta at grK Market.

Depending on how you count generations, Theodore Diamantis, 26, is the first generation of his family to be born in the U.S. or, since his parents came when they were very young, second generation. But Diamantis’ ties to Greek culture and life are so strong, his shop grK Market in Merrick, is a center of all this Greek, including some of the best feta you’ll find on the island.

Diamantis’ family story is typical of the tight-knit community of Greek Long Islanders, as I found when I researched the Hellenic communities in Nassau and Suffolk for the Ethnic Eats section of our Summer issue.

Diamantis’ father came from Patra alone when he was 15, his mother, from Thessaloniki with her family when she was eight. They met, as so many Greek immigrants did back then, in Washington Heights. They moved out to Levittown, where Diamantis was born. It was not a Greek community, but it didn’t matter. What mattered was church. There are about 13 Greek Orthodox churches on Long Island, and each one of them has a school attached that offers classes in Greek language, history and culture after school or on weekends. And all the kids go. Many of them, like Diamantis, spoke Greek as a first language. “At Greek school they taught us how to speak it correctly,” he says. “To speak it is one thing; to tweak it is another.” The lessons in language and community stuck.

Today, he says, “The Greeks stick together. My best buds are Greek, all my best guy friends have Greek girlfriends. It’s just easier that way. An American won’t understand what it’s like to grow up in a Greek household.”

His market on Merrick Avenue in Merrick, opened in 2012. There you can choose a hunk of one of a variety of excellent feta cheeses, purchase dolmades, imported olives and oil, frozen gyro meat, sausages, rose water, dried fruits, butter for baking—most of what you need for DIY Greek. Or you can get a cup of coffee just after the shop opens and when Diamantis brings some freshly baked spanakopita from the oven. He makes it every morning from his mother’s recipe; sometimes she helps him with the baking. And you sit by the blue bottles that line the front window, listen to the Greek music he’s playing and see who stops by.

It’s a warm and friendly environment that takes you to days long gone by in our immigrant grandparents’ past, when neighbors stopped by the café on the village square for coffee and conversation.