Some families are blessed to have a doctor in the house. Other families count their lucky stars to have an attorney among their ranks. Betsy Davidson’s family has far more auspicious bragging rights: they count an honest to goodness hamburger expert as one of their own. 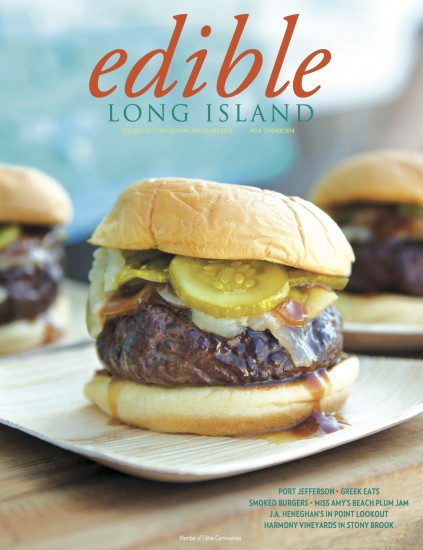 Some families are blessed to have a doctor in the house. Other families count their lucky stars to have an attorney among their ranks. My family has far more auspicious bragging rights: we count an honest to goodness hamburger expert as one of our own. My cousin George Motz is the real deal in the burger-sphere; an Edible icon, if you will. For more than 10 years, George has traveled the highways and byways of this country, eating burgers and getting to know the people behind them. A filmmaker by trade and hamburger authority by happenstance, George filmed, edited and directed the documentary Hamburger America in 2004, followed a few years later by a book of the same name. Both the film and the book tell the iconically American stories behind one of our country’s favorite foods. Since then, he has found himself in the enviable position of being the de facto guru to legions of hamburger devotees. While the vegetarian members of our clan might dissent, I seek his carnivorous counsel often.

A few months ago while mapping out this summer issue of Edible Long Island, I looked out my home office window. The trees were bare and there was still snow in the forecast. My mind immediately turned to thoughts of the beach, burgers and fun in the sun. I picked up the phone, called George, and a tasty collaboration between cousins emerged. Since grilling burgers was so obvious (and achieving grilled burger perfection far more difficult than one would imagine), George suggested smoking burgers and I was wholeheartedly onboard. George shares his techniques and recipes, including his homemade barbecue sauce on page 33. If only we could have figured out a way to include a scratch-and-sniff page.

Since most of us are not like George Motz and cannot live by burgers alone, we also have stories on two diverse and divinely delicious Greek restaurants (Ethnic Eats, page 38), we discovered some sexy pub grub at J.A. Heneghan’s in Point Lookout (page 43), ate our way around the streets of downtown Port Jefferson (Community Table, page 28) and foraged for cherries (What’s in Season, page 23) and beach plums while learning how to make Long Island beach plum jam with the mistress of fresh fruit preserves, Miss Amy (In the Kitchen, page 25).

From al fresco dining to foraging to farmers markets, summertime has arrived on Long Island. Drink it up because before you know it, “summertime done, come and gone, my, oh, my.”
Betsy Davidson,
Editor