America’s foremost expert on hamburgers fires up the smoker, and our taste buds, too.

In 2005 George Motz, a filmmaker, photographer and writer completed his second documentary film, Hamburger America. The 54-minute celebration of one our most iconic foods, which was filmed, edited and directed by Motz, tells the stories of eight folksy burger joints across the country. Hamburger America was a hit and was nominated for a James Beard Foundation Award, won the audience award at the 2009 Modesto Film Festival and has been seen at film festivals across the country, as well as on IFC, Sundance Channel and PBS. The ensuing acclaim inspired Motz to take to America’s roadways and write a state-by-state guide, also called Hamburger America, to 150 greasy spoons, luncheonettes, roadside stands and diners all serving their homespun regional version of America’s favorite food. Next came appearances on Larry King, Martha Stewart, Good Morning America (and the like), an iPhone app (Burger GPS) and then his own series on the Travel Channel, Burger Land.

Motz has now had to update his bio to include—hamburger expert.

Make no bones about it, George Motz loves hamburgers. His favorite?: “An 80/20 blend of fresh ground beef, never frozen, cooked on a hot griddle and served on a squishy soft bun.” Whoa, whoa, whoa. Griddle? It’s summertime. What about outside grilling? 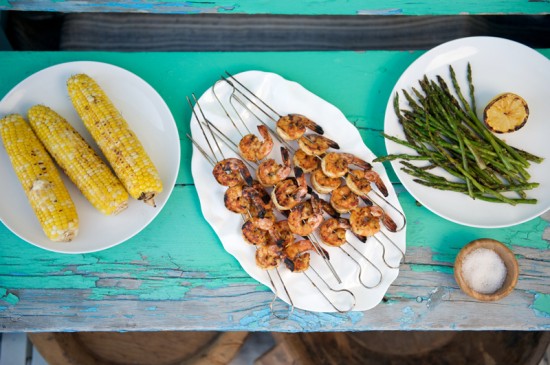 “People think that going outside and grilling a burger is easy. For me, it’s just the opposite; it’s easier to make a burger inside than it is outside. To take a patty of beef and put it on a flame and make it come out good is hard. Backyard grillers can really only practice on weekends, when it is warmer, and that is not enough time to get good at it. Also, there is no way to control the flame. If you can, then you are genius. If I make burgers outside, I usually put a flat top or griddle onto the actual grill. You can control the heat and the grease stays in the pan, grease equals flavor.”

Motz then went on to explain how he started experimenting smoking burgers outside, using indirect heat, and we were intrigued.

“People never think about smoking burgers,” explained Motz, “I came upon a butcher in Houston who was smoking burgers in the back of his place. The burgers stayed in the smoker for an hour, were juicy and tasted great. If you do it right, you can create an incredible smoky flavor—a ‘smoke ring’ [basically a tasty chemical reaction between the smoke and the meat]. There is minimal shrinkage, all the moisture stays in the beef, but the key is that smoke.”

Smoked burgers sound absolutely divine, so we asked America’s foremost expert on hamburgers to share his burger smoking methods, and what we got was so much more than tasty; it was a succulent and savory burger-eating enlightenment. Motz’s smoked burgers (grassfed beef from upstate New York) were topped with his own homemade BBQ sauce, sautéed Vidalia onions, bread and butter pickles (from Divine Brine in Huntington Station) and served on toasted and buttered Martin’s potato rolls. As most of us are not like George Motz and cannot live by burgers alone, he also prepared marinated and grilled shrimp (from Claws in West Sayville), grilled asparagus and corn, which was soaked in Atlantic Ocean water prior to grilling.

Motz prepared this smoky feast at a beach in Quogue, where we took in the setting sun, washing it down with Montauk Brewing Company’s Driftwood Ale and Wölffer Estate’s rosé; summer living on Long Island, at its best.

Presoak small hickory chips/shavings for up to 2 hours. Prepare a Weber grill with hot coals pushed to one side.

Form FRESH GROUND 80/20 chuck into 6-ounce patties. Just before placing on grill, salt both sides of the patties (if you salt too early your burger will stiffen.) Place patties on the OPPOSITE side of your coals (usually not past half of the grill surface). Add a handful of the wet hickory chips to the hot coals and cover immediately. Open both top and bottom vents. Check coals and condition of chips and add chips every 15 minutes or so. Resist the temptation to open the grill top in the interval—precious smoke will escape.

Flip patties after 25 minutes. Cook for approximately 45 to 55 minutes and serve immediately with BBQ sauce, pickles and sautéed onions ONLY on a toasted white squishy bun or potato roll.

Mix all ingredients in a saucepan, stir frequently over low heat for 20+ minutes until reduced, thick and brown. Store in fridge for up to 2 weeks.

Our cups, plates and pages overfloweth. Take a look at ediblelongisland.com for George’s recipes for his shrimp marinade and ocean corn as well as our Summer Shandy, starring Montauk Brewing Company’s Driftwood Ale.