A timeless town for all ages & stages. 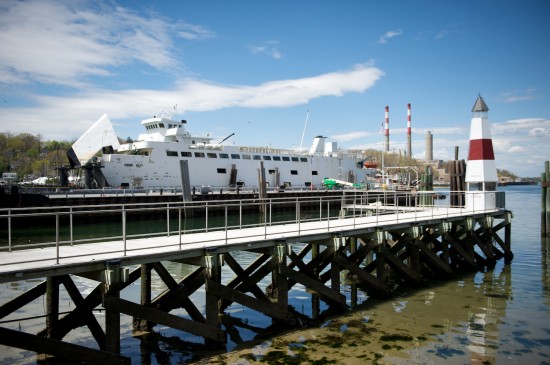 Long Island is home to many ports, from Port Washington in the west to Centerport midway, Greenport on the East End and Bellport in the south. But to native Long Islanders, when you’re headed “down Port,” there’s only one place you could possibly mean: Port Jefferson.

Summers in this seaside village are almost a rite of passage when growing up in Suffolk County. Whether your sunset wanderings were accompanied by a Chandler Square Ice Cream cone or a Ralph’s Famous Italian Ice, this picturesque town in the heart of a lovely deepwater harbor was the place to go when you were 16 and had nowhere to be on a balmy summer night.

However fondly Long Islanders recall a youth spent in Port Jeff, this local favorite is one destination that truly stays with you. Few places boast so much variety for every age and stage of life, from group karaoke nights at the Village Way and catch-up and get-together spots like Toast to upscale dates at Graceful Rose and elegant escapes at Danford’s Hotel & Marina. Eating through Port Jeff is an exciting adventure of discovery as your tastes—and life—evolves; it becomes a nostalgic journey in your sunset years, reflecting back to the many ways the town you grew up in grew alongside you. 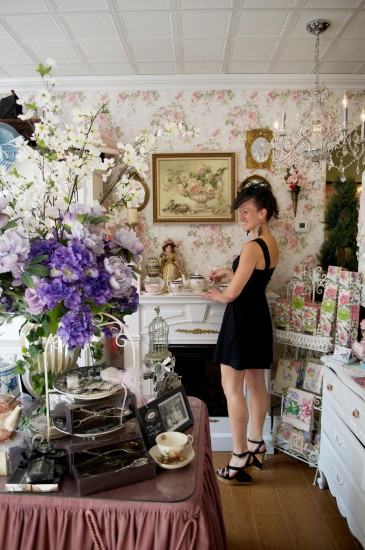 As beautifully straightforward as casual, affordable dining with the kids is, there is still something to be said about giving little girls a reason to doll up when visiting such a quaint village. At the Secret Garden Tea Café & Gift Shop, dress-up—with Mad Hatter–worthy headpieces provided—is only fitting in this hybrid Victorian garden/parlor. One of the only traditional tea rooms on the Island, the young at heart and romantics easily fall in love with the setting and the mother-daughter team that leads it. Carol and Katie Poma take pride in the intricate details here, setting each place with a poetic quote and fine china while Irish-style scones—served with traditional clotted cream—and other house-baked treats scent the air. Here, princesses are made when afternoon tea is served, and women happily trade girls’ nights out for ladies’ tea in.

But to return to our side of the pond, where coffee is king, Port Jeff also makes an impressive showing for eclectic coffeehouse eateries. A prime example is Lisa Cucinello’s Tiger Lily Café, a favorite of that ever-growing group of hip trendsetters who seek out clean eating. Having worked in food since the age of 17, Cucinello says, “I wanted to take [my] knowledge of preparing rich, delicious gourmet food and make healthy vegetarian and vegan dishes that taste just as good; to introduce people to tofu, tempeh, seitan, veggies, grains and greens in a way they’ve never seen, along with a full juice and java bar, which no one was doing before. And I wanted to create a space for music and art, which, as a musician, I’m passionate about. Here, I can blend it into one community space that was a break from the ordinary.” 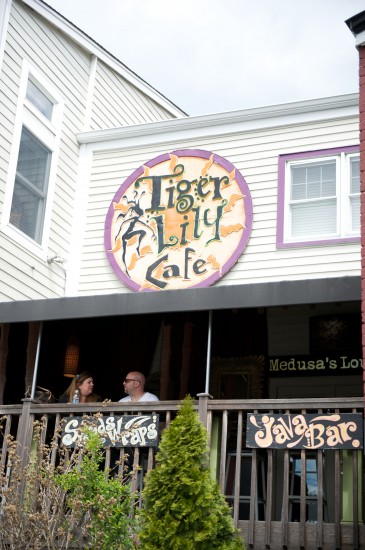 With a funky decor and a vibe that’s more Austin, Texas, or coastal California than North Shore, L.I., she definitely did. This café’s concept was not only ahead of its time in 1998 but helped set the groundwork as the movement toward healthy eating and cultural enrichment spreads, with “the influx of college students and high school kids that come and make our summers really amazing for [us]” a testament to its increasing draw.

Thoughtful pairings are the exclusive specialty of C’est Cheese, a “cheese tavern” that also supplies its neighbors Ruvo East and the Fifth Season with its fine selections, as well as Restaurant Mirabelle in Stony Brook. Its lines are sleek and chic, and every detail, from an international wine list to locally sourced Mecox Bay Dairy’s artisanal cheeses, Greenport Harbor Brewing Co.’s Summer Ale and Port Jeff Brewery’s latests, is meticulously curated. Even the experience is handcrafted, with owner Joe Ciardullo plating every serving to order, right before his guests. 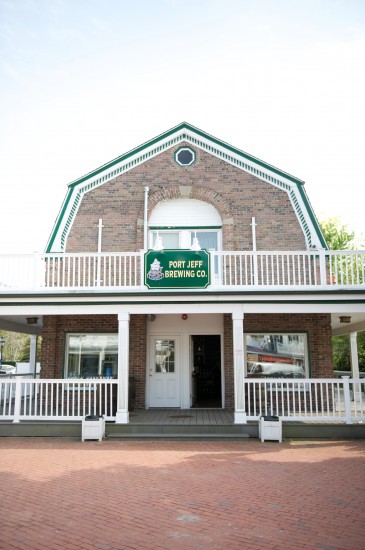 A longtime resident of Port Jeff, Ciardullo saw his shop entering the scene as a realization of what he himself was seeking.

“A lot has changed since I started coming here when I was young,” Ciardullo muses. “It used to be more of a summer destination, but I wanted to be a part of its morphing into a year-round village, since so many people do live here and in the surrounding area. So I wanted something mid-range; I toyed with creating the kind of place I want to go to when taking my wife out, more casual than a restaurant and quieter than a bar.” Already a peaceful escape for young professionals and new parents with its understated, relaxing vibe, it’s also a delicious one, serving salumi and grilleds along with its namesake dairy; imported Chimay on tap and approximately 26 wines by the glass in rotation.

If that isn’t quite enough, Pindar’s Port Jeff outpost can satisfy any oenophile hankering for local flavor. This North Fork vineyard has been bringing their bottlings to one of their family’s favorite towns since 1987. Store manager Shari Damianos tells us, “Our family lives in the local area, and we’ve always enjoyed it and meeting people who visit from all over the island, come by ferry, or through the docks from other states. Our customers range from 21 to 90, and the one thing they have in common is that they are wonderful. They make us thankful to be here so that we can teach people about Pindar wines.” 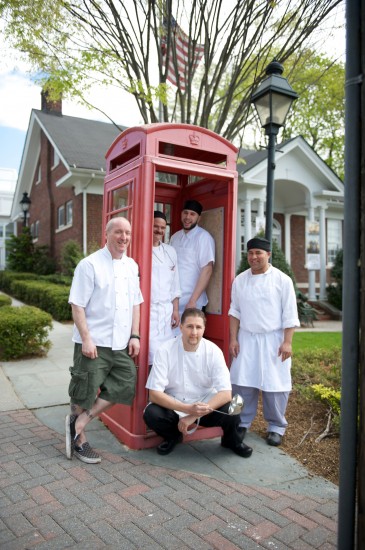 Education is often the inspiration when taste comes before all other senses, but it truly does take an artist to turn media into masterpieces that enrich as they delight—which is exactly what owner Eric Orlowski and executive chef John Urbinati of the Fifth Season do.

A highly ambitious duo extremely committed to the Long Island local food movement, their selections change with the leaves. “We’re committed to farm-to-table and seasonal menus,” says Orlowski with conviction. “We love to get small batches of fresh produce from nearby farmers, highlighting foods with small harvests with short growing times. It’s our job to surprise, educate and showcase what’s local in the height of its season.”

“We use specials to capture these ingredients, so that we can go beyond what’s standard to offer hyper-seasonal dishes, with everything made in-house,” adds Urbinati. “Because of this, we can offer gluten- and dairy-free items and accommodate different diets. After all, our demographic is people who really love great food, from people who bring their kids and teach them about food to more mature palates—and we want to be able to provide it for them, no matter what.” 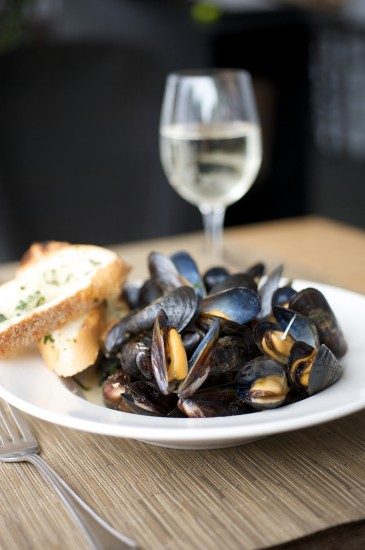 Just across the street in Danford’s Hotel & Marina, the recently renovated and rebranded Wave Seafood Kitchen also provides a feast for the sophisticated, locavorian diner. “We do our best to support Long Island and New York businesses and don’t limit ourselves to just local produce and meats. We feature three local breweries,” restaurant manager Josh Steinfeld states, “including Port Jeff Brewing Company, plus six local wineries.”

The feast isn’t just limited to the table at Wave; the eyes are also treated to expansive views and the heart to memorable moments. Director of restaurants Steve Cannon says, “As a hotel on the water with a metropolitan atmosphere, our customers range from couples on their first date to those celebrating their wedding, onto their 30th anniversary,” which perfectly illustrates the all-encompassing, multigenerational appeal even the town’s luxury staple manages to effortlessly exude. 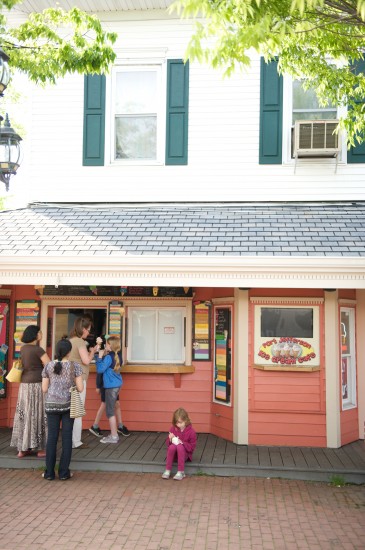 It is this breadth of clientele, this wealth of different visions and perspectives, the fluid responses to local feedback and subtle shifts based on the pulse of the community, that make this harborside village a real Long Islander’s town. It’s why you’re just as apt to find toddlers holding hands as you are lovers and as many groups out together as there are couples down Port. Here is where it all comes full circle; where regardless of age, taste, style or stage of life, there’s a magical place (or few) in Port Jefferson that truly just feels like…home. For all of us.