Hi-Ho Pale Ale, brewed by women and available this summer for limited release at BrickHouse Brewery in Patchogue. 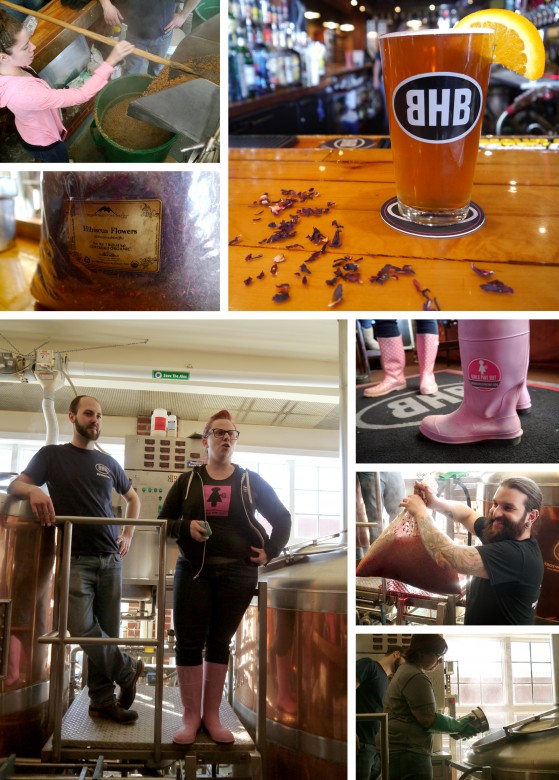 When we were leaving it to Beaver, a woman’s place was in the kitchen. Long before that, during the days of Cleopatra’s reign in Egypt, a woman’s place was brewing beer. It wasn’t until money was exchanged and beer became business that the men took over. Seeking to empower women in the craft beer world, the Pink Boots Society created the annual International Women’s Collaborative Brew Day (IWCBD), which debuted on March 8. This event was tailor-made for Lauri Spitz, founder of Long Island’s chapter of Girls Pint Out (GPO) and brewster at Moustache Brewing Company. As Moustache was not yet open, Spitz called upon her friends at Brickhouse Brewery and a collaboration started brewing.

Brickhouse’s brewers, Paul Komsic and Arthur Zimmerman met with the ladies of Girls Pint Out and, fueled by inspiration as well as a couple of pints, ideas began to whirl for IWCBD. Hoping to make a pink-colored beer, hibiscus was recommended, “Once I mentioned hibiscus, everyone just sort of went bonkers with ideas and then a couple people threw out honey and saisons,” said Zimmerman. Hi-Ho Pale Ale, a hibiscus honey saison was agreed upon. Next came the recipe and they were ready for brew day.

Hi-Ho, hi-ho it’s off to work they go. Under the guidance of brewster Lauri Spitz, as well as Komsic and Zimmerman, the dedicated ladies of GPO began the brewing process at 8 a.m. sharp on a chilly Saturday morning at Brickhouse Brewery in Patchogue. Beer has always been a social lubricant, but this day it was more like glue. Julie Henken, president of GPO, explains, “All the girls just got along instantly and it felt like we were the oldest of friends!” From Japan to Germany to Long Island, the worldwide participation in IWCBD was vast. The scale of the event impressed Komsic, “We thought this was going to be a small Long Island thing, and when we found out breweries from so many different countries participated, being able to participate in an event of such scale was truly an honor.”

IWCBD is an opportunity for women to take back their brewing roots. GPO member Sarah Rich explains, “Women have had a significant role in the history of beer-making, and it’s satisfying to see the tradition continue and elevate in modern-day craft brewing.”