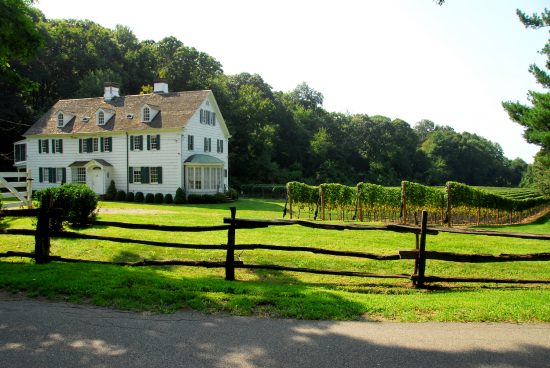 You are in the tasting room at Harmony Vineyards. It is a meticulously restored 326-year-old house with thick-planked wood floors uneven with the passage of time and fireplaces meant to warm you through even the most brutal of winters. You are looking out generous windows over chardonnay vines. Beyond, you can see the water of the harbor. You are on Long Island, but surprise, surprise, you are not in either of the Twin Forks. Where are you and how did this happen?

The conventional wisdom of Long Island’s now 40-year-old wine industry seemed to hold that growing Vitis vinifera wouldn’t work west of Riverhead. The original vineyards were planted to the east, taking advantage of the Bordeaux-like strip of sandy soil between two bodies of water, the abundant sunshine closer to the eastern tip of the North Fork and the fact that there was actually farmland available there.

But since then a handful of vineyards have started up farther west. Roanoke in Riverhead and Baiting Hollow Farm Vineyard were early pioneers and are now well established on the wine trail. And now several more have appeared even farther west, in Head of the Harbor, St. James and Sayville, giving Western Suffolk and Nassau wine lovers new destinations for day-trips closer to home. 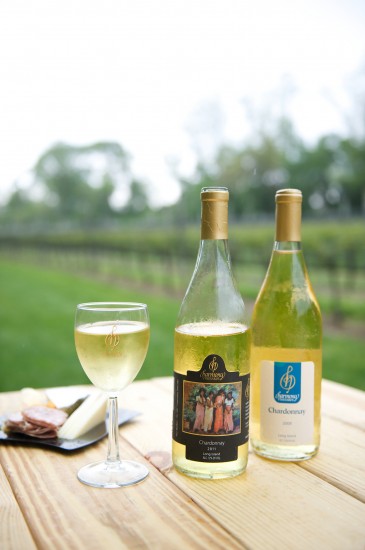 When David Acker, an inventor of medical devices (including the Biosense Carto System, a sensor technology system for arrhythmia and neurosurgery), bought the 32.5-acre Old East Farm on Stony Brook Harbor in Head of the Harbor in 1998, it was still an operating farm planted with green peppers and tomatoes. He found the vegetables less than inspiring but had a deep commitment to preserving farmland. A wine lover himself, he decided to plant four acres of Vitis vinifera.

He didn’t worry about trying vines so far west. “We have sandy, loamy soil, so I knew the soils would be appropriate,” Acker said on a recent spring day at Harmony. “You dig down a few feet and it’s almost pure white sand. We have terrific drainage.

“And we have two advantages,” he adds. “Because we are on the water, it is a little windier. That means that after a rain, everything dries quicker, reducing the need for drying agents to be sprayed. And the second is that our buds break two weeks ahead of the East End, so we have a slightly longer growing season.”

But before he could plant, he had to situate his tasting room. This was no small task. 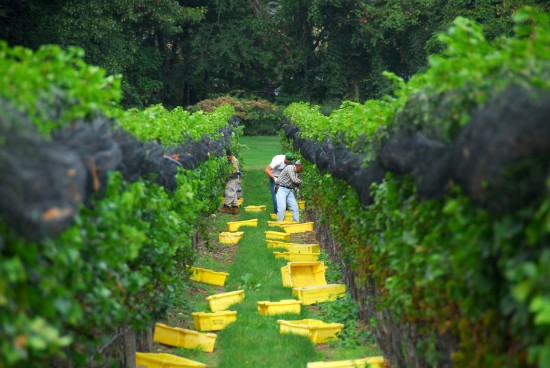 The tasting room is in the property’s original house, built circa 1690 by the grandson of Richard “Bull” Smith, founder of Smithtown. Acker moved it in 1999—yes, picked up the entire original 6,000-square-foot structure using 25 computer-controlled jacks—placing it about a quarter-mile down the property to its present location overlooking Stony Brook Harbor. Visitors will be glad he did. Sitting on the deck overlooking the chardonnay and the sunset over the harbor is a pleasure, and down by the water there are two level acres of grass for picnicking al fresco. It is possibly the only waterfront tasting room on the island. It doubles as an art gallery and concert space, and on nice evenings they project films onto the outside wall.

Acker planted his vines in 2002. Cabernet sauvignon, cabernet franc and merlot, as well as the chardonnay, which is a Dijon clone, grow under the continued guidance of noted North Fork viticulturist Stephen Mudd. Harmony’s winemaker is Eric Fry, well known for his work with Lenz, and in fact the wine is produced for Harmony at Lenz.

The first vintage was 2005, but the tasting room was not opened to the public until two years ago, in 2012.

“We wanted to have several vintages available before we opened,” Acker says.

The chardonnay is a Chablis style, with a stainless-steel fermentation. The fun of tasting different vintages side by side is immediately apparent. The 2009 vintage is crisp and citrusy, like a sauvignon blanc from Marlborough, while the 2007 is completely different, with a softer hint of butter, the result of malolactic fermentation.

The reds are Bordeaux-style blends, and again the vertical tasting reveals a thread of terroir, but while the 2006 is very friendly, soft and light, the 2008 is much more full bodied and complex.

Harmony is very much a boutique winery, producing just 700 cases a year and selling almost exclusively through the tasting room (flights are $16 while bottles range from $32 to $42), although you can find “Harmonious,” the red, on the list at Pentimento in Stony Brook.

Like its name, Harmony Vineyards seems intended not so much to create an empire but to create an atmosphere of congeniality and balance. Acker talks a lot about sustainability, and in fact, all profits from this project go to a selected basket of local charities. In just two years, Harmony’s donations have hit six figures. Events are focused on sociable and companionable activities, like the outdoor movies, trivia night and art openings. Acker also offers a rotating selection of local beers by the glass. The neighbors stop in regularly and others find out about it by word of mouth.

Acker is a very busy man; he is now the CEO of a technology start-up called TECLens, but he still finds time to plan more renovations and expansion for the winery. (He has the actual 1904 floor plans of then-owner Archibald M. Brown, who did extensive work on the house.) Port Jefferson cheesemonger C’est Cheese provides the nibbles for now, but Acker plans to expand into a local-based small-plate menu. He is working on the upper floors of the tasting room to open more gallery space. And he is committed to the sustainability not just of the winery but the surrounding community as well. “This is a mission for me,” he says. And fortunately for those of us in central Long Island, the westward movement of wineries means that it is less of a mission for us to get there.