Farmigo, a virtual farmers market connecting consumers directly with growers, is cropping up in a multitude of unlikely places on Long Island. Cafeterias, schools, restaurants and even yoga studios have become drop-off sites for local produce. Preordered online by health-savvy consumers, Farmigo’s mission statement is to “connect people with real food from small-scale local and regional producers.” 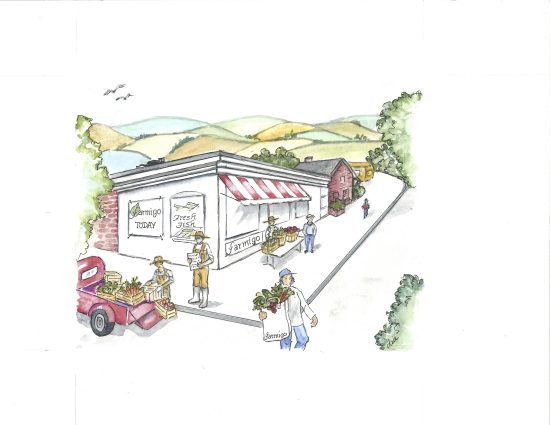 Farmigo, a virtual farmers market connecting consumers directly with growers, is cropping up in a multitude of unlikely places on Long Island. Cafeterias, schools, restaurants and even yoga studios have become drop-off sites for local produce. Preordered online by health-savvy consumers, Farmigo’s mission statement is to “connect people with real food from small-scale local and regional producers.”

Founded in 2009 by entrepreneur Benzi Ronen, chief executive officer, Farmigo aims to provide the healthiest, most sustainable and economically satisfying food options available. Selling to retail grocers, farmers generally receive 20 cents on the dollar, compared to 80 cents on the dollar if sold directly to consumers. By eliminating the retailer’s market, food is not only fresher, but it’s cheaper, too.

Farmigo is a Certified B Corporation, nonprofit company that uses the power of business to solve social and environmental problems. Ten million in funding has been raised from several venture capital firms including Sherbrooke Capital, RSF Social Finance and Benchmark Capital. Headquartered in Brooklyn, New York, Farmigo also has locations in San Francisco and has plans to branch out in various other cities across the United States.

What makes Farmigo so appealing is that consumers not only know where their food is coming from and how it’s being grown or raised, but they are supporting the local farmer and saving money as well. When ordering products from the website, each item lists the producer or farmer and whether it is organic, gluten-free or grassfed. If making an egg purchase, the actual environment that the chickens are living in and how they are raised is described in detail. To order products, simply plug in your ZIP code, and a list of local communities supporting Farmigo pops up. Items range from fruits and vegetables to meats, cheeses, dairy, eggs, breads, grains and local honey. Depending on what’s in season, the products may vary.

Farmigo is often compared to a CSA (community-supported agriculture), but in actuality it is quite different. With a CSA,
people sign up to buy a share of a farmer’s harvest for an entire season, and they can’t pick or choose what produce they want. Farmigo is smaller and more flexible in that it allows consumers to choose what products they’d like to purchase and when. There is no commitment, no minimum purchase and no delivery fee. Once a week, and within 48 hours of harvesting, the food is delivered to a designated community drop-off site. Consumers then come and pick up their own box—a personal farmers market. Farmigo is more efficient and more accessible to the consumer, and it encourages healthier eating.

In March 2014, restaurant owner and certified health and lifestyle coach Raquel Wolf-Jadeja organized a Farmigo pickup site at her West East Bistro in Hicksville. Raquel, along with her husband/chef Jay Jadeja, says that Farmigo is keeping in line with what they have been doing at the restaurant, which is creating and promoting healthier lifestyles through the use of organic, farm-raised, grassfed and sustainable foods. West East Bistro was launched in November 2012, and along with serving great food, part of Raquel’s mission is to empower people to live happy lives and to educate consumers about the importance of eating healthier.

“By getting involved with Farmigo, it complemented what we do here at West East Bistro perfectly,” states Raquel. “What’s offered is quite comprehensive and it’s so accessible to consumers. Currently we have 35 members.”

Laura Binder, a registered dietician and yoga teacher at Esteem Wellness and Fitness in Greenlawn, decided to organize a Farmigo community at the yoga studio where she works. The Greenlawn location became the first Farmigo site to open in Suffolk County back in September of 2013.

“The program sounded amazing to me,” says Binder, who counsels people on how to choose food products while explaining the difference between organic, grassfed and other healthy terms used today. “Farmigo incorporates everything I believe in for a healthy lifestyle. It brings it full circle.”

Currently, Laura has 20 regular customers, but at least 50 families in the community have participated.

For Kelly Kelleher, an executive producer for Fast Focus, she started her Farmigo community in Point Lookout strictly for personal reasons.

“I wanted to get my family off the industrial food line and take more control over what my family is eating,” says Kelly. “I had already done my research on farms, so all I had to do was to create a community. It turns out that it was very appealing to many people once I got it off the ground. It’s a nice way to provide an alternative for like-minded people. We now have choices, plus it’s a way for the community to gather together.”