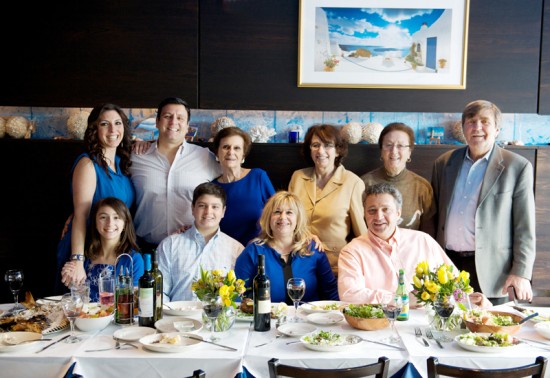 The Greek diner is a revered institution on Long Island. There’s one in every town, sometimes with a name that refers to its roots in the age of myth: Apollo, Nautilus, Omega. Others simply take on the name of whatever town they are in.

Their Olympian menus are a testament to adaptation and assimilation: Eight or more 11-by-17-inch plastic-sheathed pages in a hardcover book of breakfast, lunch and dinner offerings that range from two eggs on toast and filet mignon to only-on-Long-Island Reuben spring rolls? There is cheesy French onion soup, cantaloupe with cottage cheese, grilled chicken wrap, eggplant Parmesan, home fries with gravy. There are always a few Greek specialties on hand: spanakopita (spinach pie) or gyros, or maybe a Greek omelet with—inevitably—spinach and feta. 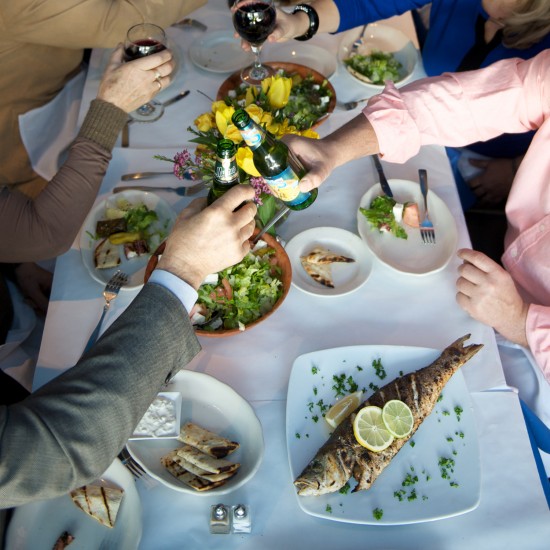 But as essential as Greek diners are to our Long Island lives—because we all need breakfast for dinner sometimes or post-club-night recovery food at 3 a.m.—they are only part of the story of the Greek community on our island.

Behind the diner—and now beyond it—a handful of Greek-Americans, firmly rooted in church and family, are beginning to share with us the kind of food that you only used to be able to find in their mother’s kitchens.

The keeping of this culinary flame is a Herculean effort by this community. “Under the Ottoman Empire the Greeks were enslaved,” says Father Alex Karloutsos, who heads up the Kimisis Tis Theotokou Greek Orthodox Church in Southampton. “Ultimately it was the family that protected them from the state, where they were not really citizens. For that reason family values and traditions became priceless, because everything else was taken away from them. And in the food you can see how that is reflected. Recipes were not written down, but great cooks handed them down from generation to generation.”

Amongst these is Michael Psilakis, from East Northport, his mother from Kalamata and his father from Crete. Today an award-winning chef and author and co-executive producer and co-star of BBC America’s No Kitchen Required, Psilakis came home to Long Island to open MP Taverna in Roslyn in 2011. The bistro-style Greek-inspired restaurant is one of five restaurants and a deli he owns. 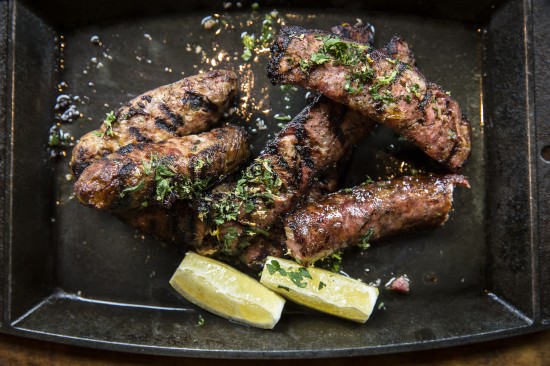 Psilakis grew up immersed in the language and culture of Greece and says he and his family never mingled with the American culture around them. He says that is, in part, why Greek food is not as popular as say, Italian.

“Greek food has seen a huge revolution over the past 20 years,” he says, as he makes side-by-side versions of a traditional Cypriot sausage and the lamb burger it has evolved into on the MP Taverna menu. “It is moving from the ethnic genre, but it has taken longer because of things like the difficulty translating even the alphabet.” 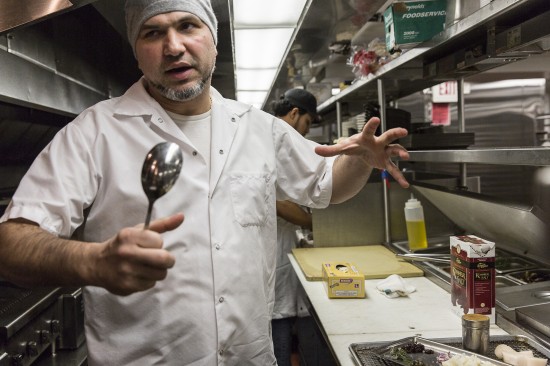 “Greek culture is very foreign and not accepting of demystification. Part is pride, which is a double-edged sword because it doesn’t allow for change,” says Psilakis. “When I want real Greek food, I don’t go out; I go to my mother’s house.”

So Psilakis has made a career out of reimagining the flavors and ingredients of his mother’s kitchen and the hunting his father did. His mission now is to take the same flavors—“It’s simple: lemon, garlic and oregano, a lot of grilling,” say Greek Long Islanders—but apply them to modern American fare, so that a Greek might look askew at the dish on the plate but upon tasting would immediately recognize where it came from and where it is going. A scallop (not very Greek) might pair up with braised cauliflower, shallots, sage, capers and the surprise of a generous dusting of pan-roasted cinnamon and a sprinkle of dried cherries—a complex Hellenic flavor profile that still lets the scallop’s brininess shine through. 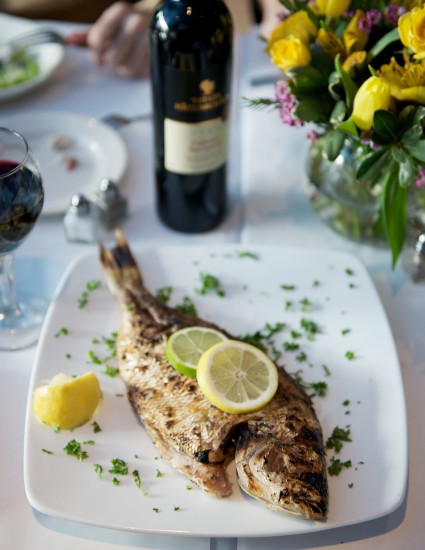 Ever-popular beef sliders might be dressed with gyros marinade. The aforementioned Cypriot sausage gets shaped into a luscious and rich lamb burger. “The premise is that this is a good restaurant that uses Greek food as a platform,” he says. “We demystify the mystical.”

He has brought his sensibility not just to New York but also to the White House, where he cooked for President Obama and Co. for Greek Independence Day in 2009. “It was emotional,” he says. “I finally represented Greece in the White House. The only thing I can liken it to is the Olympic athlete on the podium.”

Psilakis speaks and writes movingly of his family ties and passing the traditions and feelings and teachings to his own two children. Sacrifice and hard work are a recurring theme of Greek Americans, as is the importance of keeping family together.

Making it all work is a multigenerational task. No one illustrates this better than the Moschos family, owners of Neraki in Huntington Village, which opened in 2011. Their restaurant offers traditional-only-better Greek fare in a modern setting that features the cool blues of the sea and sky, and the golden tones of the sun. Alex Moschos, whose parents hail from Kastoria and Theva, grew up in Port Washington in a very Greek household. The parents of his wife, Olga Stamos, are from Evia and Ptolemaida and grew up in Washington Heights, where Olga went to Greek school full time. They met in that other Greek enclave, Astoria. The Moschos speak to one another in Greek, and their children, George, 13, and Maria, 11, both attended Greek church school.

“When I was a baby I could only speak Greek,” says Maria proudly, as she and her brother tuck into grilled chicken and fried potato disks during a family meal at the restaurant.

Neraki, which specializes in seafood that Alex picks up from Hunts Point weekly and that often includes Long Island fish, is a
round-the-clock business, the family says.

“We emphasize family time,” says Alex. “One day I will come in, and then the next day Olga will come in.

One of us is always here. We want people to know we are here for them. We close on Monday to have a family day, a day to break bread together. And Olga’s father (George Stamos) stays over often to be with the children. Without him we wouldn’t have as much family time as we do.”

As they talk and eat and share family photos and stories, Olga and Alex jump up to greet everyone who comes in, many of whom are regulars. They make sure to chat with all the diners. They ply guests with food. One senses that folks are not just there for the cuisine, which is excellent, fresh, simply dressed and perfectly cooked. It might be worth the trip just for Alex’s mother’s baklava, flaky and drenched in honey. But as much as they come to eat, Neraki’s diners come for that rare treat. To be treated like one of the Greek family.