The Buzz on Bees with Craig Byer 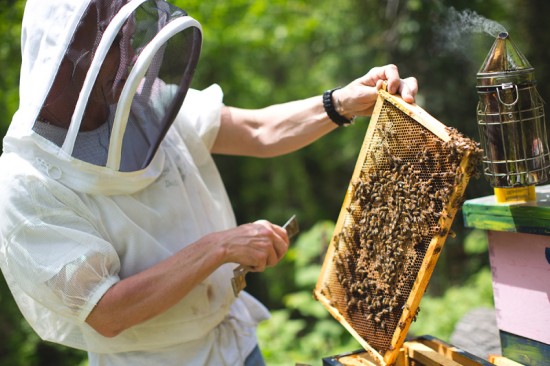 There’s a horrifying feeling only a few people ever encounter: the moment you realize the buzzing is coming from inside your bee suit. There is a blur of sheer panic, high-speed sprinting and a spastic striptease. That is, unless the beekeeper in peril is Craig Byer of Bee Cool Products.

An activist of apitherapy, Byer calmly welcomes the beneficial venom. “The apitoxin in a bee sting promotes your body to produce cortisol,” he says. “Bee stings can remedy your situation, not mask it like cortisone.” Byer shrugs off the pain and refocuses on inspecting his hives for varroa mites, wax moths and other honeybee pests. He holds his breath to calm an alarmed bee that searches for a spot to sting his face by detecting high levels of CO2.

Inspired by the severity of colony collapse disorder, Byer began keeping bees and catching swarms in 2008. “I somehow convinced them to get into the box!” he says. “The whole process was really kind of jump in and swim.” Today his hives in Smithtown, Huntington, Fort Salonga and Centerport produce nearly 1,000 pounds of honey per summer.

Aside from to his desire to wear a bee beard, Byer aims to educate people on the importance of preserving honeybees. “Bees have to visit two million flowers and collect eight pounds of nectar to produce just one pound of honey.” One of every three bites of food depends on the work of pollinators. Yet despite the bees’ endangerment, they’re still swatted at and even squished as we give the cold shoulder to the soldiers responsible for our food supply.

Byer makes Pooh Bear’s affection for honey seem like puppy love. His honey is never heated over 150 degrees, ensuring the beneficial enzymes and bacteria that give honey its antimicrobial, antibacterial and antifungal properties are preserved. Byer only filters his honey once so medicinal residues like pollen and propolis (tree sap mixture gathered by bees) stay inside.

Unfortunately, Byer always expects to lose a few hives each year. But for the first time he experienced telltale signs of CCD. “With CCD you don’t have any bees. They leave behind honey and brood (babies), which no mama would ever do.” Scientists are still searching for a definitive cause for CCD, while beekeepers like Byer attribute it to genetically modified crops, neonicotinoid pesticides and monoculture. “It’s like losing an animal,” he says, only hoping that people will begin to embrace honeybees as much as he does rather than fear them.

Bee Cool Products are available by contacting Craig through his Facebook page.