This article appears in Winter 2014: Issue No. 6 of Edible Long Island. 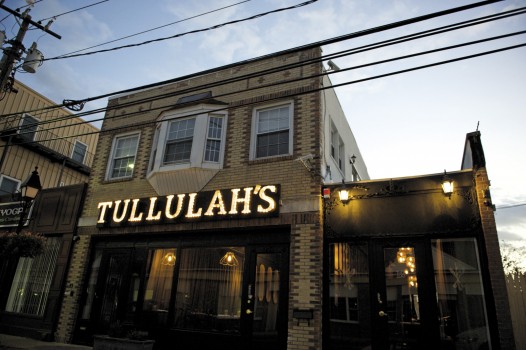 The first thing you notice upon meeting chef Steven Scalesse is his relaxed demeanor. This is a guy who seems almost surprised by his own success.

The chef and co-owner of Bay Shore’s Tullulah’s, Scalesse is remarkably candid about his camera-shy, humble outlook. “I’m not used to being interviewed,” says Scalesse. “When we first opened, I didn’t really want people to interview me, because I cared more about how the experience was. We were packed every night; that was what I cared about. When the New York Times called, I was cooking lunch, making wraps, and they were like, ‘Uh, the Times is on the phone.’ And I said, ‘Oh, just tell them I don’t need a subscription.’ My heart stopped when I found out they actually wanted to talk to me. You know, this is that situation that can make or break you. But it was fantastic.”

The man behind the stove got his start slinging slices in high school. One night, the pizza maker called in sick, and so began a lifelong cooking career. Scalesse moved from serving slices at the pizza counter to making the pies themselves. He got moved into the kitchen one night when the chef didn’t show, and he ended up cooking his way through high school. With an eye toward an art degree, he started at Nassau Community College but quickly realized that his passion was in the kitchen. His wife, Nicole, (then girlfriend) suggested culinary school, and Scalesse found himself at Culinary Academy in Westbury.

But it was at Café Testarossa in Syosset where Scalesse got his first taste of the line—and he was hooked. “I was used to dealing with pizzeria-style cooking, which is nothing like cooking on a full line at an Italian restaurant that’s jumping. I was only doing lunch because they didn’t have a spot for me at dinner. And then one Friday night someone didn’t show up and I got thrown to the wolves. Sink or swim. I swam, but I came home with blisters up and down my arm. I’ll never forget it. They put me on sauté and I walked out of there and said to the chef ‘I love it. Can I come back tomorrow?’”

His last stop before opening his own spot was at In Season, in Islip, working under chef Chris Hunter. It was Hunter who got Scalesse thinking more about cooking seasonally, with local ingredients. “I have a garden in the back of the restaurant with tomato plants and herbs. All the tomatoes we used this summer came from here or home. That’s what I love about cooking on Long Island. We have the ocean right here, our fish is fantastic; clams, oysters, they’re some of the best in the world, and they’re right from our backyard. I love that. There are some really beautiful things happening here.”

At 23, on the eve of his wedding, Scalesse decided it was time to try it alone. Except he wasn’t really alone. Scalesse had the support of his wife, Nicole, herself a designer, the whole way. “One day we were driving down this block, and I saw a space that said ‘for rent’ on it. I told my wife I was just going to call—we were about to go on our honeymoon—it used to be a little takeout place called Gringo Loco. I refurbished the whole place in 2005. It was originally 16 seats. And the rest is history.”

It was Nicole who helped with the most recent expansion and redesign. Since reopening in August after a major 14-month renovation and expansion, Tullulah’s seems stronger than ever, thanks to the vision and creativity of Scalesse and his wife. It’s hard to believe it’s the same tiny restaurant that he opened eight years ago. Tullulah’s now seats 90, and the vibe is decidedly Brooklyn meets Bay Shore. Servers are clad in all black, tattoo sleeves aplenty (including Scalesse’s own colorful left arm). The decor is minimalist but still warm, filled with exposed beams and raw wood, funky light fixtures and wall-size chalkboards covered in seasonal chalk art, done by employees of the restaurant. A thoughtful cocktail menu includes fresh takes on old classics like the Manhattan. Classic rock fills the background and adds to the feeling that this new joint, in fact, has an old soul.

Scalesse is frank about the fact that it’s an all-consuming job, which takes him away from his family more than he’d like. But he’s also passionate about the family that he’s created at the restaurant. Packed with creative talent, together he and his staff put out a product that is unpretentious and relaxed, yet still clean and sophisticated. On a recent night at Tullulah’s, I ate arctic char that was delicately portioned, with a crisp, buttery skin atop a bed of savory, almost meaty Israeli couscous studded with plump dried cherries. The scallops are perfectly seared but soft and decadent. There is an egg on toast to beat all eggs on toast, ever. Slow poached in a circulator for hours to reach the precise temperature, then flash-fried in a pan with lots of creamy butter and served atop a golden brioche with just enough fresh greens to cut the richness. Sigh…. I could eat that egg every night. Scalesse and team have struck that elusive balance between culinary chops and laid-back atmosphere, and people are taking notice.

Scalesse and Nicole have dreams of one day owning a North Shore farm where they make cheese, grow vegetables to supply Tullulah’s and have farm dinners with “big tables out in a field.” No doubt they will approach it with the same straightforward, uncomplicated style that’s made Tullulah’s such a hit. But for now, Tullulah’s is the focus of their time and energy.

Scalesse is excited about the future but still soaking in the success of Tullulah’s with his trademark humility. “I don’t see that I’m a great chef. I love to cook and I want everyone else to love it, too. Seeing people enjoy my food is worth more than everything else. This industry is what I love.”

We will happily continue to be the beneficiaries of such a quiet talent.