Your once-in-a-lifetime chance to make matzoh stuffing has finally arrived.

Your once-in-a-lifetime chance to make matzoh stuffing has finally arrived. 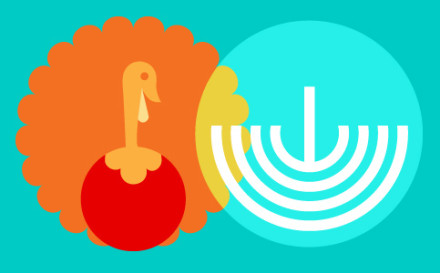 On Thursday, worlds will collide when families across the country celebrate the first day of Hanukkah on Thanksgiving. Thanksgivukkah, a popular portmanteau of the two holidays, indicates a rare overlap between the Hebrew and Gregorian calendars.

Everyone’s favorite gluttonous holiday will be even better with the addition of a host of Hanukkah traditions. Thanksgivukkah is not just for American Jews: anyone can appreciate the unusual combination of the two delicious holidays.

The once-in-a-lifetime celebration is gaining worldwide attention, and has sparked an eruption of Thanksgivukkah themed holiday ideas: decorations, songs and – our favorite – mouthwatering dishes. Families will light “menurkeys” – turkeys with candle-adorned feathers – instead of menorahs, Macy’s will feature a giant dreidel in their Thanksgiving Day parade and kids will covet cheddar coins instead of gelt (yeah, right).

Thanksgivukkah also happens to be Jon Stewart’s birthday. That just can’t be a coincidence, right?

According to a quantum physicist in Maryland, the next Thanksgivukkah won’t roll around until year 79811, when families in silver onesies will gather around the table and eat turkey grown in a space lab. But since it’s 2013, we’re going to take a more traditional approach. A cursory Thanksgivukkah Internet search will garner hundreds of meal ideas, but here are some of our favorites:

So get out your pilgrim bonnets and yarmulkes, prepare the matzoh and the turkey, and get ready to party like it’s the last Thanksgivukkah of your life!