I Dream of Seaweed: A Kelp Industry for Long Island 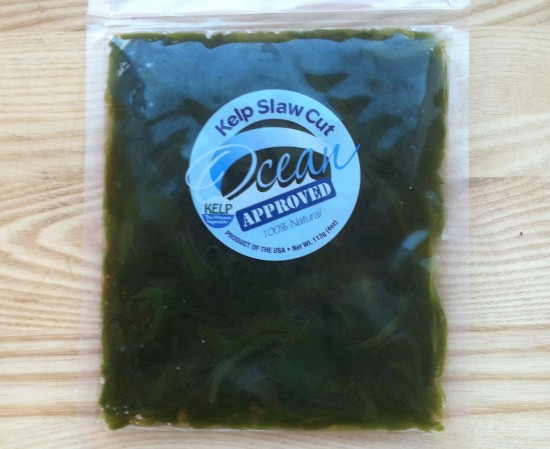 Joe Tremblay, owner of Bay Burger in Sag Harbor, never ceases to amaze with his innovative Americana offerings: seasonal veggie sides, a grassfed upgrade, and uber-popular ice cream. But his sights now extend beyond the grill to an ocean-based crop he thinks Long Island should be raising more of: kelp.

In addition to slinging ground beef, Tremblay’s an avid fisherman and founding head of the Sag Harbor oyster club, an offshoot of the Southold-based SPAT program that trains citizen mollusk gardeners. The club established a community oyster “plot” off the village’s main bathing beach and won approval for hanging demonstration cages off Long Wharf at the end of Main Street. (Tremblay’s own haul was so ample this year that he hosted several oyster culling parties–which basically means slurping the bigger ones to make room for the littler ones.) Next week, the South Fork Natural History Museum will host a party to support eelgrass restoration, an effort Tremblay is also involved with.

But when I dropped in for an afternoon ice cream sandwich, Tremblay was excitedly juggling what looked like bright green Kindles. In fact, they were packets of Maine-grown seaweed, blanched, sliced and frozen, in three options–noodle cut, slaw cut and salad cut–raised by Portland-based Ocean-Approved, which uses the trademarked kelp tagline, “Virtuous Vegetable” and provides infographics showing that kombu is way healthier than milk. Defrost, toss into a soup or salad, season, and away you go. Tremblay picked up the 4 oz. samples (which sell for roughly $4 each) at a workshop in Rhode Island where he learned how the kelp is raised in the waters off Maine, using a similar technique as Thimble Island Oysters, the Connecticut-based firm that is the first seaweed producer in Long Island Sound (the New Yorker profiled their kelp cocktail).

“We should have a kelp industry out here,” said Tremblay, eager to give seaplant farming a try on the East End. “It’s an extra crop option for baymen. It’s healthy to eat and it pulls nitrogen out of the water.” That is, just as oysters and clams help filter the bays and inlets of nutrients and pollutants, kelp extracts large amounts of nitrogen from the bay, locking it up in the tasty, leafy matter we munch on. Which could make Tremblay’s enthusiasm particularly timely. As Long Island Farm Bureau head Joe Gergela argues in a recent Newsday oped, the best way to prevent pollution into Long Island’s groundwater is by working with farmers to continue improve, like planting buffer strips along bays and growing kelp in those bays. In related news, bay-superwoman and oyster grower Karen Rivara was just named the first woman, and the first aquaculturist, to head the local Farm Bureau. I have a feeling there is more kelp in our future.