Remember the legendary squid and wine dinner from earlier this spring? Get ready for Act 2: an all-duck, red wine dinner going down at Almond Restaurant in Bridgehampton this Thursday. 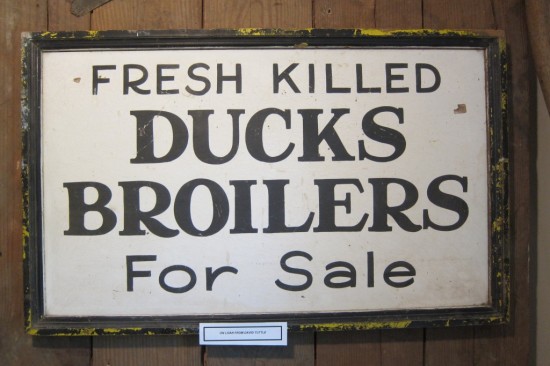 “As good as meaty ragus can be, duck ragu is kind of king.” So argues the new Roberta’s Cookbook. And that’s kind of the point between an all-duck, red wine dinner going down at Almond Restaurant in Bridgehampton this Thursday, November 14.

You may recall a similar sort of ingredients-obsessed meal from this past spring that revolved around squid and rose. For this autumnal time of the year, chef Jason Weiner turned his attention to waterfowl, which have a long and famous history on Long Island (not to mention a special place in this amateur duck-raiser’s heart). Many farmers would argue that ducks are better than chickens, turkeys and other poultry. That they are hardy and efficient animals, that they lay more eggs than chickens if you consider that the eggs are larger and that their meat is tastier. (In flood-prone agricultural areas, they are the superior climate-friendly choice.) Many chefs, including Tom Schaudel, Gerry Hayden and Keith Luce, would argue that their meat is tastier, and have made duck wings, duck breasts and duck skin staples on their menus. Duck also goes particularly well with red wine, so Long Island winemakers Christopher Tracy of Channing Daughters and Kareem Massoud of Paumanok Vineyards are trading off course, including a Negroni with Channing Daughters vermouth and dessert with Paumanok’s Vin Rose. And Edible East End will be on hand to share what we know of ducks.