Andrew Wilder, blogger at EatingRules.com, created October Unprocessed in 2009 as a challenge with a few good friends. Four years later, nearly 10,000 have pledged to join Wilder for a month of real food. 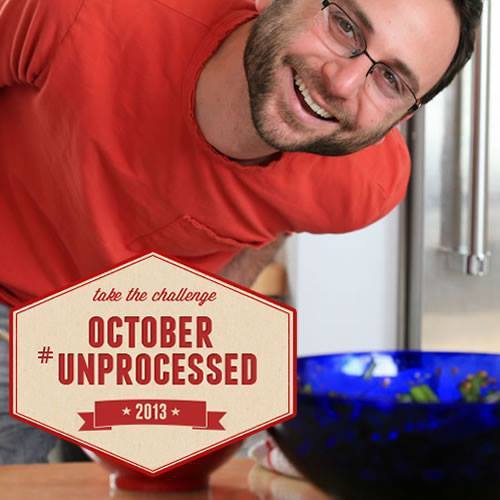 My diet is fairly healthy and fairly simple. There’s rarely a day I don’t start with fruit and oats, and sometimes I even eat too many vegetables.

But when it comes to processed foods, I’m as guilty as the next person. Is green tea still green tea if I can’t drink it without splenda? Is spinach as virtuous if I sauté it in PAM that contains dimethyl silicone and propellant?

As a lover of farm stands, fresh herbs, and homemade butter, I can do better. And that’s why I’ve decided to join October Unprocessed, a pledge to eat no processed foods from today until Halloween.

Andrew Wilder, blogger at EatingRules.com, created October Unprocessed in 2009 as a challenge with a few good friends. For the entire month, he ate only unprocessed foods to raise awareness about preservatives, flavorings, artificial colors, and the unhealthy foods these ingredients often make up. Four years later, more than 10,000 have pledged to join Wilder for a month of real food.

Unprocessed food, according to Wilder, is “any food that could be made by a person with reasonable skill in a home kitchen with whole-food ingredients… It doesn’t mean you actually have to make it yourself, it just means that for it to be considered “unprocessed” that you could, in theory, do so.” Vinegar pearls from my molecular gastronomy kit, for example, are out. Fresh lentil soup from Whole Foods, on the other hand, is in.

Throughout the month, Wilder will have a series of guest posts so participants can share their experiences with the challenge. Last October, Monique Hartl, student at Just Food’s Farm School NYC and apprentice at Bushwick Campus Farm, posted about making unprocessed food accessible and locally grown through urban farming. “I know that not everyone in my city has convenient access to fresh food like this, or cannot afford to eat this way on a regular basis,” she wrote. By raising awareness about eating locally, she hoped to expand access to unprocessed foods.

The best part about October Unprocessed is that you can customize it so that it works for you. If a week seems more reasonable than a month, then try a week. If you just can’t survive without you’re favorite cereal, add it to a “deliberate exceptions” list before the month begins.

I love challenges and I love real food, so I’ve decided to go all out. For the next 31 days (but whose counting?), I bid adieu to my beloved frozen yogurt. Who knows? Maybe by November, I won’t even crave it anymore.

When Marissa was a little girl, she threw her bottle and pacifier down the stairs and begged for “real food.” More than two decades later, her passion has grown into a part of her everyday life. She graduated in 2012 from the University of Pennsylvania, where she studied public health and nutrition with a focus on school food and nutrition education. Marissa is now in the food studies masters program at New York University, and she has taught children’s nutrition, gardening and cooking classes for the past four years.