This article appears in Fall 2013: Issue No. 1 of Edible Long Island.

Why Guy Reuge? If the coveted Toque d’Argent (think culinary Stanley Cup) gets your attention, then read on. If not, read on anyway, as nice-guy Reuge is truly le grand fromage of the culinary world, minus any and all of the attitude and hype.

Why Guy Reuge? If the coveted Toque d’Argent (think culinary Stanley Cup) gets your attention, then read on. If not, read on anyway, as nice-guy Reuge is truly le grand fromage of the culinary world, minus any and all of the attitude and hype.

French native Guy Reuge was born in Saint-Lô, a small city in the Normandy region of northwestern France. Raised in Orléans, in the Loire River Valley of central France, he began his culinary career at the tender age of 14 with a three-year apprenticeship in his hometown. At age 17, he began the Tour des Compagnons, a French organization of artisans and craftsmen, dating back to the Middle Ages, which teaches students traditional trades (in Reuge’s case, cooking), working as journeymen apprentices throughout France. Young Reuge honed his culinary chops working in kitchens in Paris and Strasbourg as well as in Fribourg, Switzerland. By the ripe old age of 20, Reuge had fulfilled his French military duty at the esteemed École Polytechnique, where he was the personal chef for the director, General Pierre Briquet, and cooked for military officials, dignitaries and even French president Charles de Gaulle. Civilian life brought him to our shores in 1973 where he worked in some of New York’s more renowned restaurants of the day, among them: René Pujol, Maxwell’s Plum, Le Cygne, as well as Tavern on the Green. After 10 years in New York’s hottest restaurant scene, Reuge and his wife, Maria, an editor at Gourmet magazine, decided it was time to open their own place. With some financial support from his wife’s Long Island uncle, who nudged the couple toward “his own neck of the woods,” the Reuges opened Mirabelle in an old farmhouse in St. James in 1983. After 25 multi-star-filled years, Lessing’s Hospitality Group invited Reuge to bring the Mirabelle name, reputation and flavor to Stony Brook’s Three Village Inn. Reuge now runs both Mirabelle Restaurant and Mirabelle Tavern, side by side in historic Stony Brook Village.

In 2006, Les Maîtres Cuisiniers de France (Society of Master Chefs) awarded Reuge their coveted Toque d’Argent, along with the title, “Chef of the Year.” This was (and is) a huge deal. The Toque d’Argent (silver chef’s hat) is undoubtedly the most envied title that chefs aspire to earn. The society’s mission is “to preserve, advance and perpetuate the tradition of great French cuisine.” While the farm-to-table movement has always been more of a given in French cuisine, rather than a concept, Reuge is proud to say “what we are doing in America these days is prodigious.” With this innate sensibility to all things farm to table, Reuge wholeheartedly embraces our seasonal local produce, seafood, poultry, meat, wine, beer and artisanal and small-batch products. “It doesn’t get much better than here on Long Island between the Fourth of July and Thanksgiving,” says Reuge of the range and variety of our seasonal bounty. 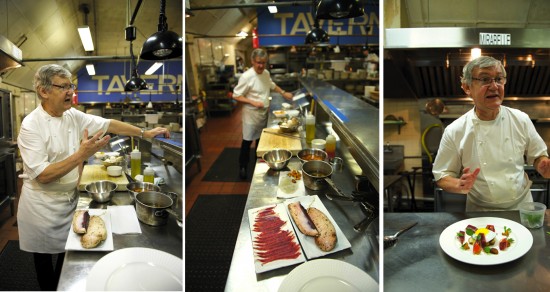 When asked to share a dish with our readers, Reuge suggested an appetizer that is dually inspired by his French heritage and his Long Island home: “Duck Egg—‘Breakfast at Dinnertime.’” Like most of us, Reuge laments, “I love breakfast, but rarely have the time to enjoy it.” Consisting of greens from Sang Lee Farms, duck prosciutto (available at dartagnan.com), a fried duck egg, duck-fat-roasted local potatoes, Amagansett sea salt, miniature pickled local chanterelles, green onion oil and herbs from Mirabelle’s own gardens, this dish is a sublimely tasty and Louvre-worthy work of art. Fortunately for all of us, the appetizer will be available this fall at Mirabelle’s new “Fresh Meets French” farm-to-table menu, featuring the bounties of Long Island and our neighboring states.

The Long Island restaurant scene has been elevated and our palates cultivated by this French-born and -raised Long Islander. His culinary savoir faire, seasonal sensibilities and sincere genial nature made us proud to go In the Kitchen with Guy Reuge.

METHOD
DUCK EGGS—Easy to find at either Long Island Eastern farm stands or Whole Foods supermarket. The eggs will be pan fried at the last minute.
POTATOES—In a large pot, melt the duck fat. Add garlic, shallot and thyme. Add the potatoes, bring to a boil, reduce the heat and cook slowly. It will take about 15 minutes to be done. Drain the potatoes, and rest them on a clean towel.
CHANTERELLES—In a small pot, add sugar, vinegar and water. Bring to a boil, and add the chanterelles. Cook over medium heat for 5 minutes then cool down, leaving the mushrooms in the pickling liquid.
SCALLION OIL—Blanch the green part of a bunch of scallions and a handful of spinach in salted water, cool down and drain. Squeeze the greens of any excess water, and process in a blender, adding enough olive oil to make the pasty mixture looser. Line a China cap with a damp towel, and pour the scallion mixture in it. Let drain slowly for at least 4 hours before collecting the scallion oil, and discard the solid.
CROUTONS—Cut 2 pieces of 2-day-old baguette 5 inches long. Slice them lengthwise using a meat slicer to have them as thin as possible. Roll each one and insert a toothpick to keep them in place. Transfer on a baking sheet tray, sprinkle olive oil and bake them in an oven set at 325° until golden (less than 5 minutes). Remove the toothpicks.
ASSEMBLAGE—Cut the potatoes in half, transfer in a bowl, and season with a touch of sherry vinegar and olive oil, salt and pepper. Divide the potatoes in the center of four large plates.
Drain the chanterelles, and display them around. Put each egg atop of each mount of potatoes. Add the thin slices of duck prosciutto just over the chanterelles, garnish with herbs and flowers, add 3 to 4 croutons per plate, a few drops of scallion oil, a touch of sea salt on each egg, and serve.
Serves 4.