Most of us wouldn’t dare put knives in the hands of a pack of five- and six-year-olds and start giving them instructions in a foreign language, but most of us aren’t Susa Quintanilla. 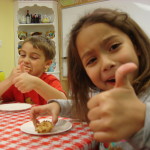 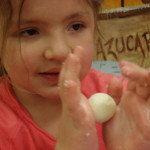 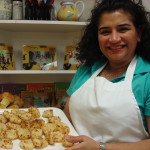 Most of us wouldn’t dare put knives in the hands of a pack of five- and six-year-olds and start giving them instructions in a foreign language, but most of us aren’t Susa Quintanilla.

Known by her students (who include my five-year-old son) as Miss Susana, Quintanilla, originally from El Salvador, is the cooking instructor at Spanish All Year, a language development school that is part of the Westbury Language Center. Designed to develop Spanish language skills through cultural experiences in art, literature, dance, and—of course—cooking, the school has about 180 students from infants to tweens. Mearly 100 of them participate in the cooking classes in the fully operational, friendly kitchen, decorated with pictures of exotic fruits and dishes.
“Hoy vamos a hacer una receta de Bolivia (Today we are going to do a recipe from Bolivia),” Quintanilla told a recent group of five-year-olds as they gathered on the floor in a circle to begin the class. First students found Bolivia on the floor-to-ceiling world map. Then they reviewed the words and letters associated with the dish, arepas (fried dough). Finally, they gathered around the big table and got hands-on, helping Quintanilla prepare the dough and shaping the round patties themselves.

Finally, Quintanilla fried the dough and the kids tried (or decided not to try) their creations. Sessions last from one half hour to one hour and are conducted entirely in Spanish. In each session, Quintanilla, whose seven years of experience at the school include off-site culinary coursework, hits all the language skills: listening, speaking, and beginning reading and writing; as well as geography and following instructions. Recipes come from all the Spanish-speaking countries and there is a new recipe every week. Today there are no knives, but they do come out for other dishes. Rest assured, they are plastic.

“These are the kinds of experiences the children will never forget,” says Quintanilla. “It is moving. Some of them have sensitivities and they don’t want to get their hands dirty. You learn to help them with that. They don’t just have a language experience; it is connected with something they like to eat. They say ‘I made this with my own hands.’”

School director María Isabel Martínez, from Colombia, asserts that including cooking is essential to the success of the program, which began in 2000. “They have to try everything and do everything, including chopping and touching and tasting,” she says. “It has to be real. Soup, rice, just like one’s grandmother might make. Life can be so artificial, so we strive to give them a real experience.”

It gives parents a real experience too. Students make enough so that moms and dads get to sample at the end of the sessions. And almost every week, this is my son’s parting refrain. “Mom, did you try this? We have to make it at home. We have to.” And much of what he says is sprinkled with Spanish!