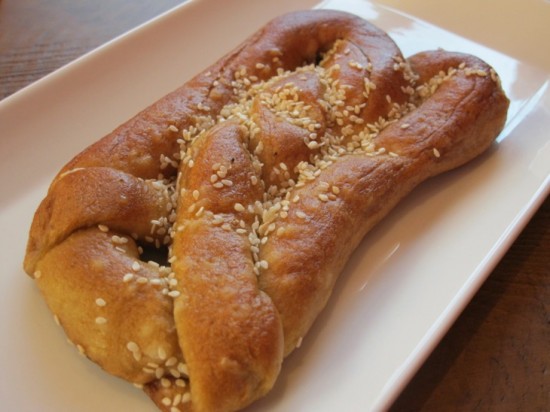 Dissatisfied with the state of mass produced soft pretzels, the Rockville Centre resident set out to roll and bake the best pretzel he’d ever tasted. Gallagher’s do-it-yourself spirit inspired him to create the South Shore Pretzel Company. Now, he’s rolling pretzels on weeknights and selling his creations on weekends at local farmers markets.

It took time for Gallagher to come up with a winning recipe wrapped in a perfectly shaped pretzel. He played with temperature, procedures and ratios. “It was about two-and-a-half years of tinkering,” he says.

Gallagher says part of a pretzel’s appeal is visual. South Shore Pretzels are a handful, and feature three substantial twists at the center. “It should look chewy and worth grabbing,” he says. “It should look like something you can wrestle with.”

What goes better with pretzels than mustard?” asks Gallagher.

He admits to indulging in a bit of “self-sampling” as he develops new varieties. “Everything I put out is what I would eat,” he says. “That’s what keeps me going. That’s part of the joy of it.”