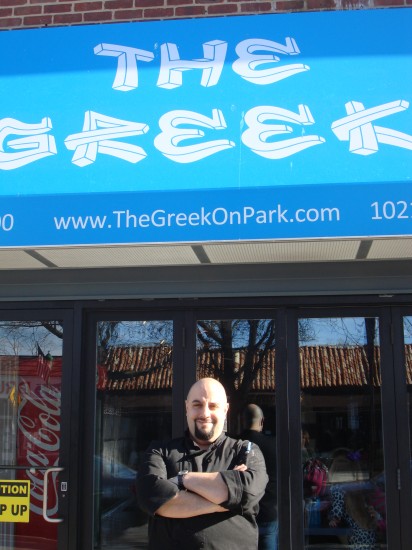 UPDATE: This restaurant has close until further notice. Stay tuned.

And so, kind of by accident, kind of on purpose, and very serendipitously, restaurateur Pete Mangouranes, 36, who owns The Good Life gastro-pub in Massapequa Park, American-style tapas restaurant The Phoenix in Seaford, and The Republic pub in Farmingdale, opened The Greek, a fresh (really fresh) tribute to the grandmother who raised him on fresh (really fresh) Greek food.

“This was an accident,” Mangouranes told me during a break between a steady stream of customers picking up takeaway bags or sitting down to dine at the 16-seat Park Boulevard location in Massapequa Park, drenched in sunshine from the full-length windows. “I was working on opening a breakfast place on the corner (Jam, coming soon) and then the guy who had this place (a short-lived hamburger joint) wanted to sell. He started throwing out some numbers and I said ‘I could actually do this; everything here is just a year old.’ Then my brother said ‘Are you ever going to open a Greek place?’ and so I opened The Greek

True to the form of his other restaurants, The Greek uses only fresh ingredients, not frozen. Tom & Sons butcher next door makes the loukaniko (pork sausage) with a spice mix from the restaurant. A Farmingdale butcher provides the lamb for the real sliced gyros (they go through about eight legs a day). The hummus is made from scratch, the olives marinated in-house. The menu includes a full complement of hot and cold appetizers, salads and soups, sandwiches and sides.

“It’s tough doing it from scratch every day,” says Mangouranes whose family comes from Lesvos. “And people are not used to the fresh stuff. It’s a learning process. But Greek food should be fresh and clean. And the seasonings are just basically garlic, lemon, rosemary and olive oil, so you can really taste the food. That’s it.”
By the looks of it, the public is ready for this addition to the Park Boulevard eateries. Despite a soft opening on December 18, 2012 and no advertising, the restaurant traffic has been steady. Both the marinated tuna pita and the falafel my friend and I ordered were bright flavored, well-seasoned and light on the palate. Next time, I will try the lamb, which looked delicious and juicy on the spit and smelled like heaven. And I’ll finish with the Greek yogurt bar and its assortment of toppings.

And come spring, if Mangouranes opens those big glass doors to the street, I’ll be bringing my own retsina to pretend I’m enjoying the sunshine at a Greek island café in the company of tycoons. With these flavors, it won’t be hard to imagine.